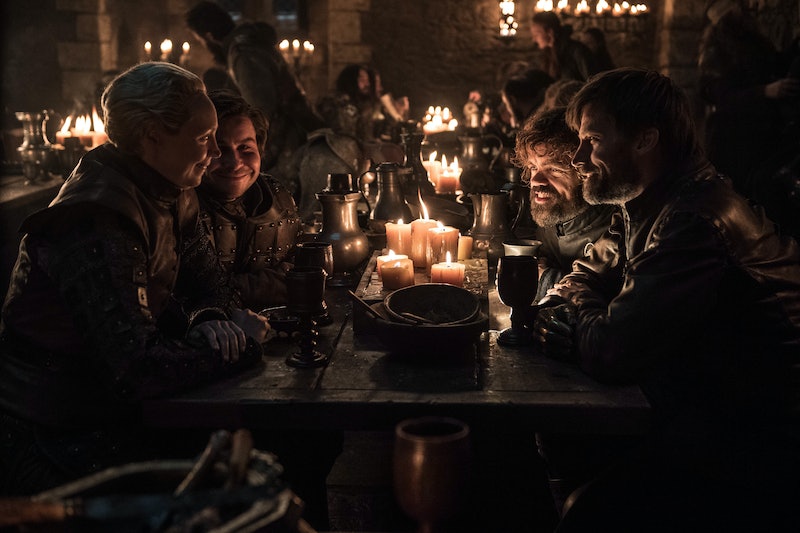 It's rare to see a sweet love story on HBO's acclaimed fantasy series, which is why Brienne and Jaime's relationship on Game Of Thrones in this final season stands out. Spoilers ahead for Game of Thrones Season 8 Episode 4. After years of will-they-won't-they, the two finally got together in "The Last of the Starks," only for him to run back to Cersei. While some fans were unhappy to see Brienne of Tarth in tears over a guy, Gwendoline Christie thinks this romance offered Brienne "acceptance" and a chance to show the world she is both a lover and a fighter.

GoT fans have been shipping Brienne and Jaime Lannister since Season 3, so seeing them take their relationship to the next level felt long overdue to some fans, and very satisfying to Christie herself. "What I really loved about it and what helped in the playing of it, is that Brienne made the decision to be with him," the actor said in an interview with The Hollywood Reporter.

Though some felt the show did Brienne dirty by leaving the knight with a broken heart at the end of the episode, the actor has a different perspective. It was a rare moment of vulnerability for the woman who has sworn her life to protect Sansa Stark, and Christie told THR she was excited to give Brienne a chance to just feel all the feels, to "bring a reality" to that moment. "I wanted her to experience the journey of emotions that she would have," Christie said, "in all of its conflicting parts."

That's why Christie told THR that allowing Brienne to give into her feelings for Jaime was "about acceptance. Sometimes, when you have a character who has battled for so long to overcome obstacles and does not tend to have a lot go their way, the idea of that person finally being given some kind of acceptance is extraordinarily beautiful."

Not only an acceptance in herself, but an acceptance to take what life gives you. Brienne doesn't know where the relationship with Jaime will go but she takes the risk anyway. That's not easy for a strategist like Brienne who goes into battle with a plan, but free falling is what people do when they're in love.

"She let her armor down," Christie told Variety of Brienne's choice to be with Jaime. "It was essential for the character to evolve beyond what we'd seen so far, which was her strength and ability at fighting and physical combat. We get to see something else of this woman's emotional world and how she's developed over the years."

Watching Brienne let her guard down was bittersweet, especially after Jaime leaves her. But, making the choice to be with him, knowing this was always a possibility, is an empowering one, according to the actor. "She's not stupid," Christie told THR. "She's really aware that this is a conflicted man on many levels. But she wants that moment. She's just cheated death; she managed to survive the battle. She decides to give herself that experience."

Brienne knows the world owes her nothing. She could be gone tomorrow so she decides to live for the now, knowing that life is exciting and unforgiving and she wants to experience it all. Finally, she is more than a knight or Sansa's guard, she has become her own person.

With only two more episodes to go and the Battle of King's Landing to fight, it's unclear whether this new Brienne will be able to make it out of Game Of Thrones alive. But, at the very least, she got a chance to show fans who she is: a strong woman and warrior who deserved a bit of happiness in a world where few get it.