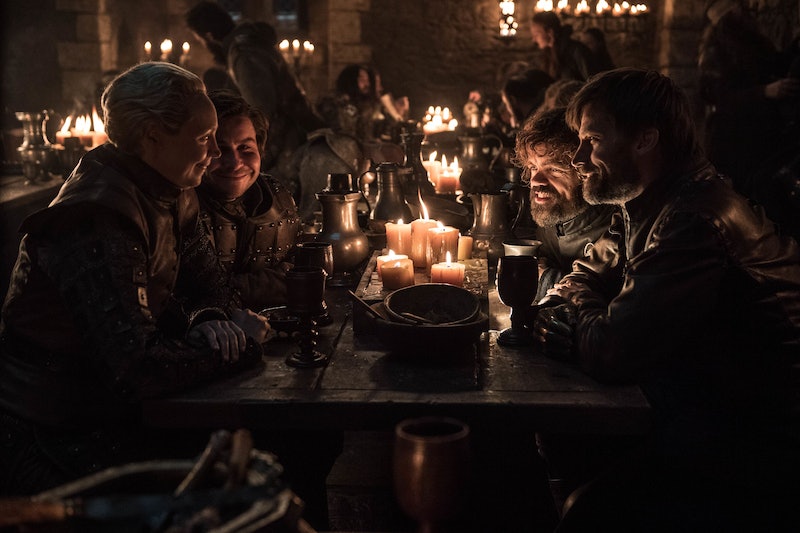 After seasons of building tension, slow-growing affection and one very moving knighthood ceremony, it seems as if Jamie Lannister has finally found love — and not with his sister. Jaime and Brienne kissed on Game of Thrones and the thrilling moment had fans celebrating this long-awaited moment on social media.

Surviving the Battle of Winterfell meant that everyone still alive in the North needed to let off some steam, and that included Brienne (Gwendoline Christie) and Jaime (Nikolaj Coster-Waldau), who turned their celebratory dinner into a very flirty drinking game. Though she stormed out after Tyrion (Peter Dinklage) seemed to hit a nerve by asking if she was a virgin, Jaime quickly followed her out — and their next scene together seemed to fulfill everything that shippers had ever dreamed of.

With their trademark banter, the pair quickly began shedding clothes after Jaime complained about the heat in the room, and, once Brienne took control by unlacing her own top, their relationship quickly escalated. "I've never slept with a knight," Jaime said, referencing the moment the night before the battle where he finally gave Brienne the knighthood she deserved. "I've never slept with anyone," she responded, before he quickly kissed her, sending Thrones fans everywhere directly into their feels.

Of course, their delight was short lived; despite staying behind in Winterfell in order to spend more time with Brienne (she swore to protect Sansa, and thus, was remaining in the North while everyone else headed to battle at King's Landing), he quickly left after discovering that Dany's arrival in the capital had resulted in the death of one of her dragons.

Leaving Brienne sleeping in bed, Jaime slipped out in the night to head down to King's Landing on his own, seemingly shaken by Sansa's declaration that she had "hoped to be there when they execute" Cersei. The newly-minted Knight of Tarth rushed after him, asking him to stay, but the former Kingslayer explained that he wasn't the person she thought he was.

"You think I am a good man," he said, before listing the many reasons why he was no better than Cersei. "I pushed a child out of a window, making him a cripple, for Cersei," he said, revealing for the first time what happened to Bran. "She is hateful, but so am I." Naturally, the quick bait-and-switch of their romance left fans shook:

Because Game of Thrones is a show built on the idea of subverting the standard tropes of fantasy sagas, it's not surprising that they gave fans something exciting and happy, only to rip it away not long afterwards. Still, having Jaime run back to Cersei seems to undermine all of the growth and long-simmering tension between him and Brienne that the show has built over the past few years.

However, Coster-Waldau had teased the possibility of a romance between Jaime and Brienne, noting in August that Jaime might "find the love of his life" when he arrives in Winterfell. If that's true, it could mean that Jaime isn't running back to Cersei so much as attempting to make up for his crimes by fighting her, and thus, making himself the good person that Brienne thinks he is.

Now that Jaime and Brienne have finally kissed, the possibility of a proper romance seems even more likely than ever before — but while the specter of Cersei looms over Westeros, it seems unlikely that Jaime will ever be able to be truly happy.

More like this
This 'Black Panther' Character Is Starring In Her Own Marvel Show Next Year
By Grace Wehniainen
'SNL' Shared An Exclusive "Sneak Peek" Of 'House Of The Dragon' Season 2
By Stephanie Topacio Long
'Wakanda Forever' Is Already Opening Doors For Mabel Cadena
By Grace Wehniainen
How To Stream 'Black Panther: Wakanda Forever'
By Chloe Foussianes
Get Even More From Bustle — Sign Up For The Newsletter