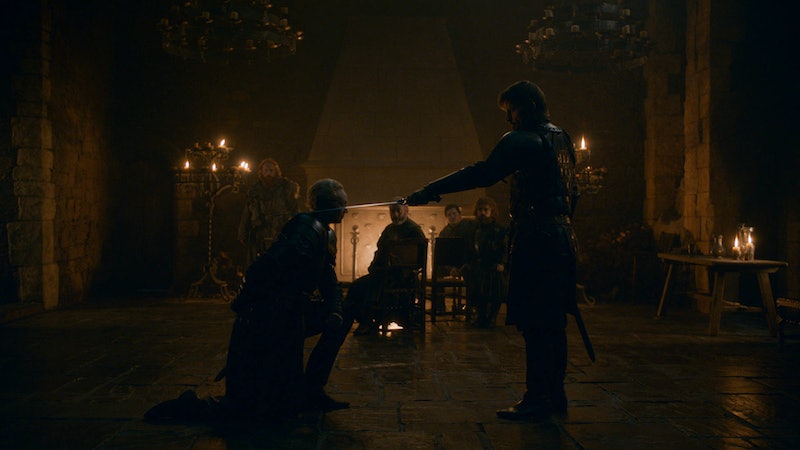 The road to Jaime knighting Brienne wasn't exactly a smooth one, but it's one Game of Thrones fans were lucky to travel with the characters. Before the two heroic knights head into battle at Winterfell, it's time to take a look back at Jaime and Brienne's relationship timeline. While they're firm friends now (and maybe even something more), they started out as captor and captive back in Season 2. And it's safe to say neither of them imagined their lives would become so entwined back in those days.

Fast forward to Season 8 and everything has changed. Jaime is now the kind of man who would fight under Brienne and knight her before they stand together against the army of the dead. Meanwhile, she's in a place where she'll allow herself to accept such an honor from the man she once called the Kingslayer. As relationships go, theirs has proven to be an unconventional one to say the least, but it's also one that's made them both better people in the long run.

There's a good chance that one or both of them will die defending Winterfell. But no matter what happens next, no one can take away just how incredible Jaime and Brienne's relationship has been since they first met on opposite sides of a war in Season 2.

Jaime and Brienne's first introduction comes courtesy of Lady Catelyn Stark. Deep in mourning, Catelyn decides to free Jaime after Robb captures him in hopes of trading him for her daughters, Arya and Sansa. The Lady of Winterfell asks Brienne to escort the Kingslayer safely to King's Landing and bring her daughters home.

Season 2, Episode 10: Brienne Shows Jaime What She's Made Of

It doesn't take long for Jaime to see Brienne's far stronger and more noble than he ever could have imagined. At the start of their journey, she takes out four Stark soldiers on her own, and then proceeds to bury the women they hanged for sleeping with Lannister men. He doesn't say it, but it's clear that Jaime is impressed.

The duo's trip through the Riverlands gets interesting when Jaime gets his hands on one of Brienne's swords, leading to a bitter sword fight that only ends when they're caught by Bolton men intent on bringing the Kingslayer back to Robb.

Season 3's "Walk of Punishment" is a big episode for both characters. It's the episode where Jaime's quick thinking keeps Brienne from being raped by Locke and his men, but it's also the one where he presses his luck too far and loses his hand to his dangerous captors.

Jaime's ready to give up after he loses his hand, but some tough love from Brienne forces him to see that he still has a reason to live.

It's in the bath at Harrenhal that Jaime and Brienne's bond solidifies. A nearly delirious Jaime tells Brienne the truth about the Mad King and how he earned the name Kingslayer. In that moment, she truly sees the dilemma he faced and how difficult it can be to keep oaths.

After being released from Harrenhal, Jaime can't bring himself to leave Brienne behind. He returns just in time to hop into a bear pit and save the Lady of Tarth from Locke's twisted games.

After Joffrey's death, Jaime gives Brienne her sword, Oathkeeper, and outfits her with her custom made armor in order to uphold her oath to find Lady Sansa. She promises to find the Stark girl not only for Catelyn, but also for Jaime.

They take the long road, but Jaime and Brienne finally reunite in Season 6 after the Lady of Tarth fulfills her oath and finds Sansa. As usual, Jaime and Brienne find themselves on opposite sides when she arrives at Riverrun in hopes of bringing the Tully army North to help the Lady Stark retake Winterfell. Still, Jaime's thrilled to see her, and when she tries to return Oathkeeper, he poignantly tells her, "It's yours. It will always be yours."

When the parlay between Cersei and Daenerys goes south, Brienne isn't content to see Jaime blindly side with his sister when the whole realm is at stake. This leads her to tell him, "F*ck loyalty." He's shocked to say the least, but it's also the wake up call he needs to leave Cersei in King's Landing and ride North to fight in the battle against the dead.

Jaime's arrival in Winterfell means he has to face a whole lot of people who want him dead, but Brienne defends him and his honor to Sansa. It soon becomes clear, that the Lady of Tarth is a big reason why he's there, and he even asks if he can fight under her command in the Battle of Winterfell. Later, as they wait for the dead to come, he makes the ultimate gesture of love by giving Brienne the only thing she's ever wanted: her knighthood.

From Brienne wondering who would want to die for a Lannister in Season 2 to Jaime knighting the Lady of Tarth in Season 8, Jaime and Brienne's relationship timeline shows just how far these two star-crossed characters have come since their first fateful meeting.