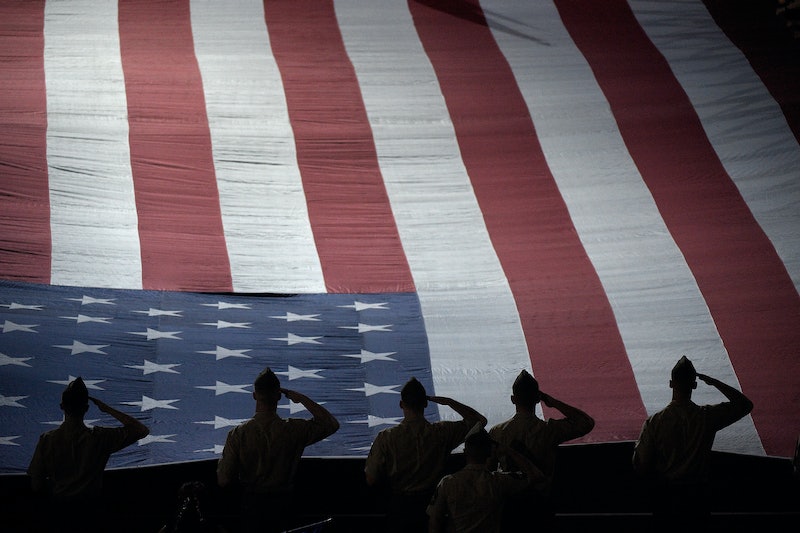 For the first time in history, a woman will command a U.S. Army infantry division. Brig. Gen. Laura Yeager will be in charge of the 40th Infantry Division of the California National Guard come June 29, NBC News reported. Leading an infantry division is no trivial task; the total number of soldiers within such a unit can range from 10,000 to 15,000, and their primary focus is military combat.

With her new title, Yeager will be replacing Maj. Gen. Mark Malanka who is retiring from his rank, USA Today noted. Per NBC News, Yeager presently commands the Joint Task Force North of the U.S. Northern Command in Texas. But she'll soon begin working at the Joint Forces Training Base in Los Alamitos, California.

With a bachelor's degree in psychology from the University of California Irvine and a master's degree in the same subject from Chapman University, Yeager was first commissioned to become a second lieutenant from the Reserve Officer Training Corps at California State University in 1986, according to her National Guard bio. She has received multiple medals and badges over the years, including medals within the Global War on Terrorism Service, Army Commendation, Iraq Campaign, Meritorious Service, and other categories.

In comments to USA Today, Lt. Col. Jonathan Shiroma said, "I think it's an exciting time for the California National Guard. [Yeager] has been a battalion commander, a brigade commander, and now a division commander." Through her diligence, Yeager had earned the position, Shiroma added.

In 2016, Yeager spoke of her journey as a woman in the American military. After being promoted to the rank of a brigadier general, she spoke to the Defense Visual Information Distribution Service that year, which is a news and information service for the Defense Department. "As a female, I have found the military to provide opportunities and benefits unmatched by any profession," Yeager said.

"Clearly, females are in the minority within the military," Yeager added to the news service, "yet in every assignment I have held, my mostly male peers, subordinates and superiors, have supported me, treated me with respect, coached, mentored and advised me."

Still, Yeager said that reaching the rank of a brigadier general would not have been possible without the support of her female colleagues. "I have been inspired by the incredibly strong and amazing women I have served with and for," she said in 2016.

Years before she was designated to become the first woman to command an infantry vision, Yeager was already taking up daunting training sessions in the army. For example, she received official military helicopter training in 1989, per Military.com. It was during that time that she began serving as a Black Hawk helicopter aeromedical evacuation pilot, the outlet noted. In 2011, she was deployed to Iraq in the capacity of the deputy commander of the 40th Combat Aviation Brigade for the California Guard, Military.com reported.

With such a detailed combat portfolio, it's no wonder that those around Yeager shower her with praise. Extolling her once more, Shiroma told USA Today, "She's an outstanding leader, and many of her subordinates who worked with her in the past are looking forward to working with her again."