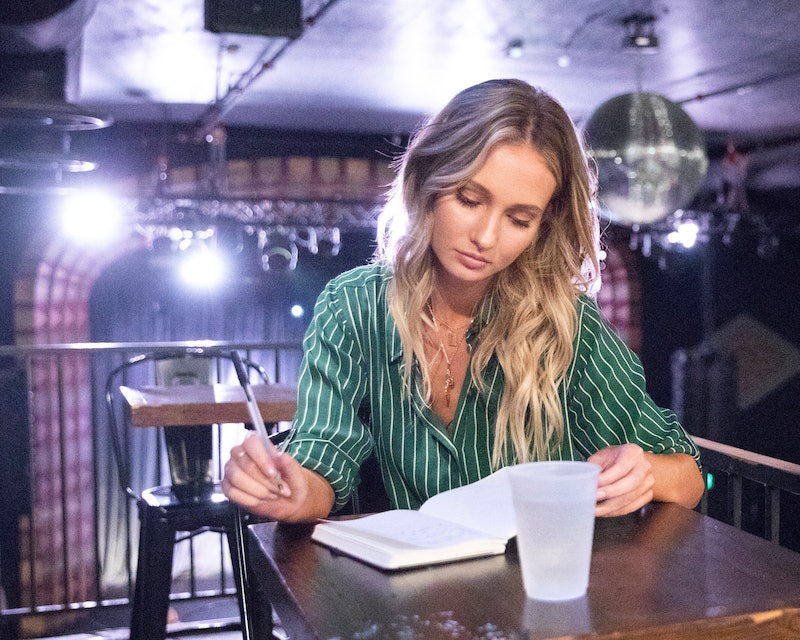 Remember when one of Colton Underwood's Bachelor contestants introduced herself with a fake Australian accent? Well, she's back! As shown in the teaser for Tuesday night's Sept. 3 episode, Bri Barnes is joining Bachelor in Paradise as a late addition. And given that she wasn't on The Bachelor for long, you might want to learn more about her. Bri's Instagram account is a good place to start.

Before we get into what she's been up to, though, you may need a little refresher. Bri wasn't on Colton's season for long, but she caught a lot of attention before the show even aired when a promo was released that showed her introducing herself with a fake Australian accent. After stepping out of the limo, she told Colton, "I was hoping that you're kind of a sucker for accents," only to reveal to the camera that she's not Australian at all.

Bri later confessed to Colton that she just did it as an ice breaker (as shown in a deleted scene), and she didn't end up becoming a major player on the show after that. She left in week three after not receiving a rose.

But now, she's about to get some more time on our TV screens and even — judging by the trailer — join Blake Horstmann's never-ending web of women. Here are some things to know about Bri based on her Instagram.

There are a lot of reality TV stars and influencers who call themselves "models," but Bri genuinely is one. She's walked in Miami Swim Week multiple times and has worked with recognizable brands like Pacsun, Nordstrom, and Hollister. She's also signed with Newmark Models, and her bio on their site explains that she started modeling at age 14 and has lived in Miami, Istanbul, and Milan for her career. On Instagram, she often posts about her work, including some behind-the-scenes pics from photoshoots.

She Travels Quite A Bit

Bri has plenty of Instagram pictures of herself in Miami for work, and in the photo above she's visiting New York City.

She's Not Friends With A Ton Of Bachelor Stars

When you browse a lot of Bachelor contestants' Instagram accounts, you immediately see photos of them with friends they made on the show. This is not the case with Bri, and it's kind of refreshing. Not everyone is going to immediately bond with people they knew for only a couple weeks. (Or, who knows, maybe she did make friends and just doesn't post about them. Either way, she's doing something differently than other franchise stars.)

She Was At Stagecoach

When it comes to Bachelor in Paradise, this is the most important information of all. Stagecoach, a country music festival, has been brought up countless times during this season of BiP since so many of the contestants attended prior to filming the show. In particular, Blake met several of the female contestants there, and it was at Stagecoach that he slept with Caelynn Miller-Keyes the night after being with Kristina Schulman. We'll have to see if Blake and Bri have already met, but it will 100 percent be mentioned that she attended the festival.

Whether she fares well on BiP or not, it looks like Bri will be just fine with her fun, modeling life. And based on her love of festivals, expect her at Stagecoach 2020, too.