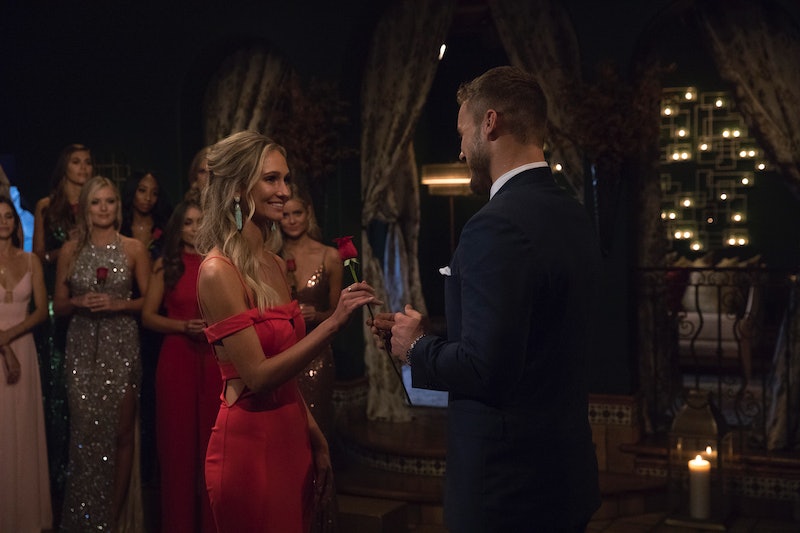 Joining Bachelor in Paradise at this point in the season is tough. A lot of people are coupled up, and the ones who aren't are likely to have been involved in some drama already (looking at you, Blake and John Paul Jones). But the show must go on, and now, Bri Barnes from Colton Underwood's Bachelor season is hitting the beach.

If you don't remember Bri, this might jog your memory: she was the one who faked an Australian accent. As was shown in a promo for Colton's season that got everyone talking, she used an an Australian accent while meeting the former football player during her limo entrance. She even said, "I was hoping that you're kind of a sucker for accents." But moments later, she told the camera, "I'm not really Australian, but you have to do what you can to stand out." Technically, she didn't lie to Colton when they first met at the Bachelor mansion. When he asked where she was from, she said, "The accent is Australian."

Though it would have been funny to see Bri keep up the act throughout the season, she came clean to Colton on night one, as shown in the below deleted scene. In fact, she revealed that she's never even been to Australia; she's actually from Los Angeles, and just uses the accent as an ice breaker to show off her "lighthearted" side.

Bri stuck around for a couple of episodes after that, leaving the show in week three after she didn't receive a rose. Before she left, she participated in a group date during which the women each had to talk about a "first" in their life after being coached by Megan Mullally and Nick Offerman. Bri's first was about feeling comfortable in her own skin, which is an important feeling to have, but not exactly memorable. Bri went on to appear on the Women Tell All special where she, apparently, did not tell all, because there are no notable memories from her appearance.

Now, Bri is getting another chance at love (and more screen time) on Bachelor in Paradise. From the teaser, we know she shows up in Tuesday's Sept. 3 episode, but she's actually already appeared on the show: she was one of the soon-to-be BiP Season 6 contestants at Krystal Nielson and Chris Randone's wedding. It seemed like they were just thrown into the wedding mix because they were already in Mexico, and producers wanted to see if they'd stir up any new connections before hitting the beach. This worked out with Connor Saeli, who bonded with Caelynn Miller-Keyes at the wedding before officially joining the cast the next day.

While Bri's time on BiP is going to be short-lived simply because of when she's arriving, it does look like she gets involved in a bit of drama. The trailer for Tuesday night's episode shows Blake and Kristina possibly rekindling things, only for him to get a little distracted when Bri arrives. And because of course you're wondering: Yep, she was at Stagecoach.