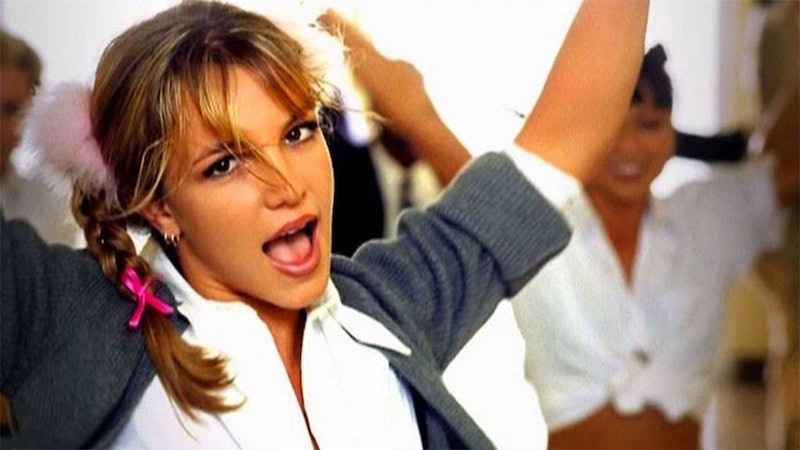 Nothing explains the pop culture of the late '90s better than the original Total Request Live, and nothing screams TRL quite like Britney Spears' "Baby One More Time" video. In fact, the two definitely had a symbiotic relationship — the daily music countdown show hosted by Carson Daly premiered just two months before the "Baby One More Time" video hit the airwaves in November 1998, a month after the single was released. It was a win-win; TRL likely earned more viewers as fans of the former Disney star called in to vote for Spears' now-iconic video and hey, having the most popular TV show at the time play your video every day sure can't hurt.

It's hard to imagine a world without Britney Spears now, but at the time, no one was expecting her to be a star. Nigel Dick, who directed the "Baby One More Time" video, tells Bustle over the phone ahead of the video's 20th birthday that he had no idea who Spears was or whether the song, which he personally loved, would be such a hit. Neither did anyone else — the video premiered on TRL on a Friday afternoon, which wasn't exactly the biggest day, ratings, wise. Dick tells Bustle:

"When the video was released, I showed it to some people in my side of the business and they were very unimpressed by it. I happened to be proud of it and felt like I had a done a good job, which is why I was showing it to people. And they were like, 'nah' and halfway through they were already dealing with something else. So when it came out on TRL, a Friday [no one seemed to care]...It’s the same with the release of a movie. On Friday, you’re an idiot, and by Monday you’re a genius."

Choreographer Randy Connor also had no idea what he was getting into when he was called in by Jive Records, Spears' label to "develop" her as an artist. But he had a huge role in forming Spears as an artist and remembers that she had a lot of input on how things went down on set, whether it was the wardrobe, the premise of the video, or even the dance moves. It was a group effort, but Spears was in the thick of it, which says a lot about her talent — it's not easy for a 16-year-old woman to get people to listen to her. Dick tells Bustle that he remembers being "impressed by how professional she was." She, along with Dick, Connor, and the rest of the crew, didn't know they were making history.

Which is why even if you were more of a rocker who spent the latter half of 1998 listening to Limp Bizkit, or stanned hard for Monica & Brandy's "The Boy Is Mine," the TRL number one video just before 16-year-old Spears came onto the scene, you likely still know the words to "Baby One More Time" and at least some of the choreography. (Let's face it, it was part of all our after-school routines for months on end, at least until the "Sometimes" video came out in April 1999 and replaced it on the TRL countdown.) The backflips, Spears' longing looks into the camera as she sings about her loneliness, and of course, the skimpy school girl uniforms are just that iconic.

So, in the lead up to the video's 20th birthday, here are some of the decisions, according to Dick and Connor, that might have changed pop culture history as we know it — along with some other lesser known facts about the ever legendary "Baby One More Time".