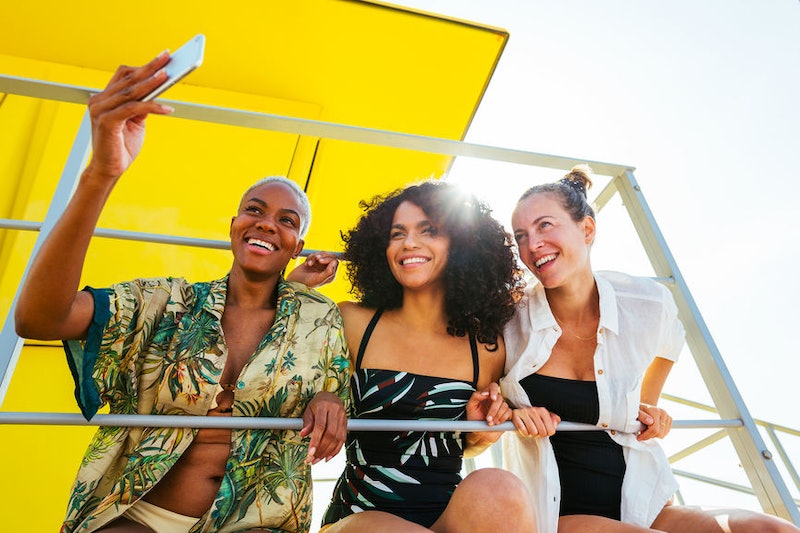 How many best friends do you have? If you're a Brit, you've probably got somewhere around 2.6 — which puts your social circle on the smaller side, globally speaking. According to a new survey of nine countries by Snap Inc., Snapchat's parent company, people in the UK have the lowest number of best friends, while those in Saudi Arabia have the highest, with an average of 6.6.

Snap Inc.'s "Friendship Report" surveyed 10,000 people across the UK, the U.S., UAE, Saudi Arabia, Malaysia, India, Germany, Australia, and France, to figure out what our social circles look like and what we value most in a best friend. It reveals "new findings around how friends interact across the globe and generations, while also highlighting the impact of technology on our lives," the company said in a press release.

Amy Moussavi, head of consumer insights at Snap Inc., said in a statement, "Snapchat was designed from the outset as a platform to enable self-expression and deeper relationships with your real friends, which has driven our interest in the complexities around friendship and differences across cultures," adding, "While friendship looks very different across the world, we know it plays a central role in our happiness and we remain deeply committed to finding new ways to celebrate and elevate it through Snapchat."

On average, respondents to the survey had "4.3 best friends, 7.2 good friends, and 20.4 acquaintances." After the UK, people in the U.S. had the second lowest number of best friends, with an average of 3.1. Americans, too, were the most likely to report having one best friend. According to the study, those in India, Saudi Arabia, UAE, and Malaysia had, on average, three times as many best friends compared to those in the UK, France, Germany, Australia, and the U.S.

Another unsurprising finding for any millennial: willingness to share content on social media varies from generation to generation, with millennials (hi!) the most "share happy." Members of the baby boomer, Gen X, millennial, and Gen Z generations were surveyed; of them all, millennials were "the least likely to say 'I wouldn't share that," the study found, and the most likely to use Instagram and Facebook to "share issues publicly."

Millennials, too, wanted a best friend with an "extensive social network" more than members of any other generation. What's more, they were also most likely to crave "as many friends as possible." Remember monitoring the swell of your Bebo/MySpace/Facebook friends list when you were in secondary school, or adding every person you so much as blinked at in Fresher's Week? Truly, social media has made friend hoarders of us all.