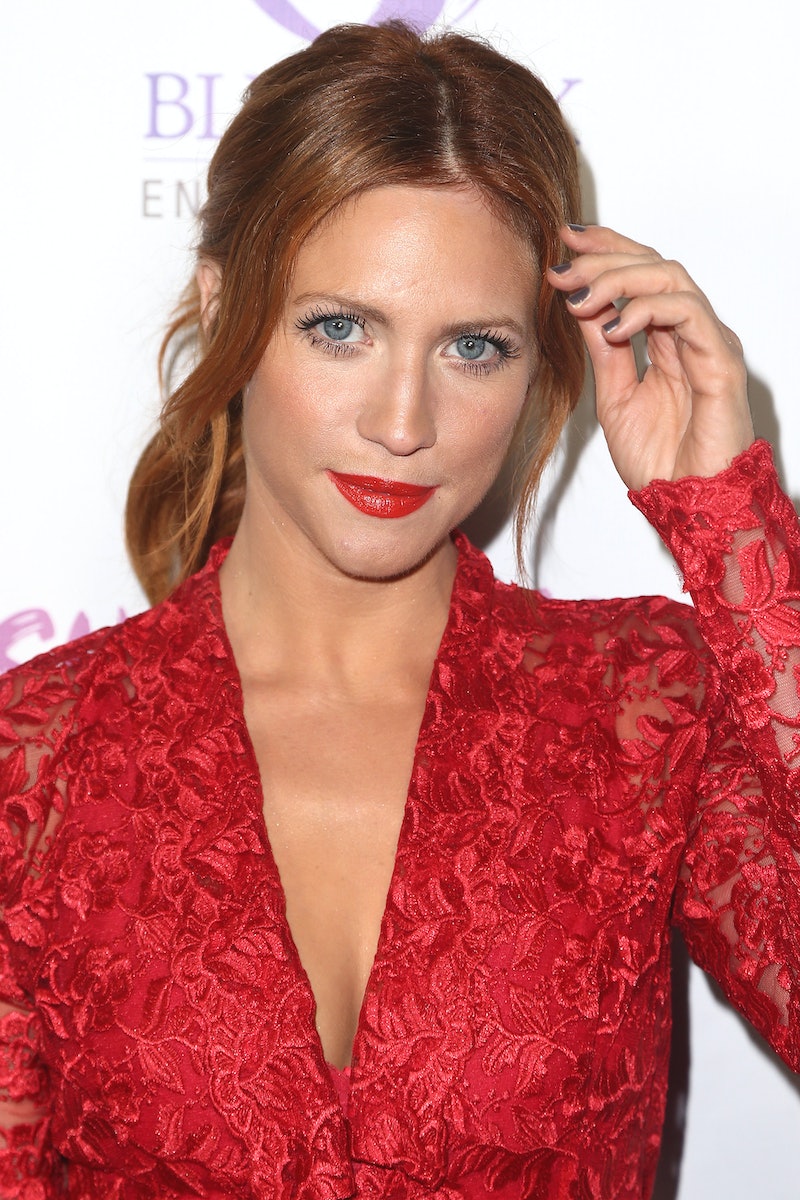 When people fall hard for each other, the size, color, and band of an engangement ring isn't as important as the relationship itself. Still, though, an engagement ring is a symbol of love and commitment. Brittany Snow's engagement ring may not be as flashy as some other celebrities' diamond rings, but it's certainly timeless.

Snow has joined the bride-to-be club with many other actors who have recently been sporting bling on their left hands. The Pitch Perfect actor announced on Feb. 19 that she'd actually been engaged for weeks before making the announcement publicly. In in the carousel of pictures she uploaded to Instagram, the actor included a photo of the glimmering jewel itself. Upon Snow's ring finger was a classic oval cut ring on a diamond-encrusted band.

"I’m still pinching myself and thanking my lucky stars for the truest feeling I’ve ever felt," Snow wrote in the caption of the photo. "Thank you @tylerstanaland for the happiest day of my life & for not proposing in this creepy empty restaurant."

Snow's ring features a single shiny diamond, and is not only a minimalist dream, but a timeless piece that will be stylish enough to pin to wedding boards in 10 (or even 20) years time.

The lucky person who captured the Pitch Perfect star's heart is Tyler Stanaland, a realtor and self proclaimed "Surf Nerd" according to his Instagram bio. While Snow was posting about her joy for the big news, Stanaland also shared the same photos on his personal Instagram page.

"A few weeks ago, I asked @brittanysnow one of the most important questions I may ever ask. Forever? Luckily she said yes and we’ve spent the last little while celebrating the old fashioned way, together and with close friends and family," Stanaland wrote in the caption. "Here’s to forever and making our wildest dreams come true. Love you to the moon and back."

Based on the couple's Instagram pictures, the two appear to have a lot of fun in their spare time. Between basking in face masks together and spending time on the beach, it's no wonder the pair is ready to say yes to forever.

After sharing the photo for the world to see on Instagram, plenty of other celebrities showed their support in the comments.

"Omg babeeee so happy for you," Hudgens commented. "Congratulations."

Snow is among other stars (Katy Perry and Jennifer Lawrence, for example) who have recently agreed to tie the knot.

Although the actor and her fiancé had kept their engagement on the low for a few weeks, Snow hasn't announced an official date for the wedding. For now, her posts on Instagram indicate she and her soon-to-be hubby are simply enjoying the celebration of their engagement with friends and family.