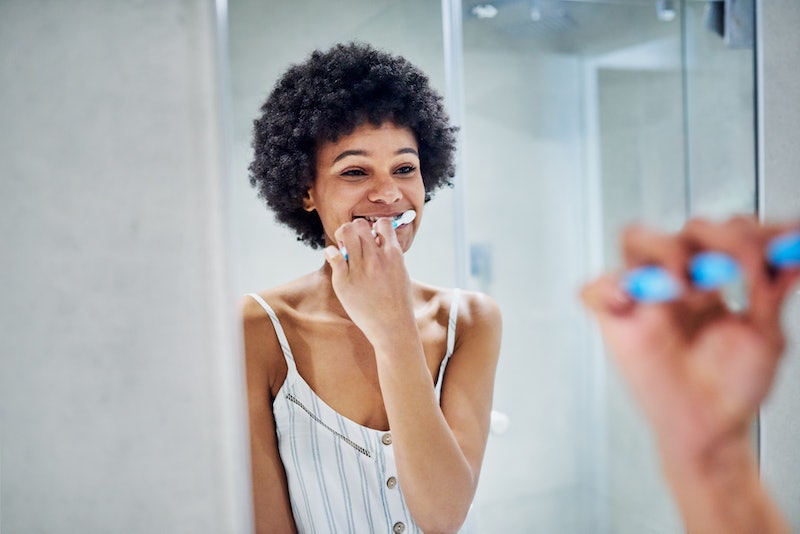 If you’ve ever scoffed at the person in your office who brings their toothpaste to work and brushes in the bathroom in the middle of the workday, you might want to take back your secret judgment. Brushing your teeth regularly brings a whole host of benefits, like preventing cavities and tooth decay (because no one wants to go get fillings at the dentist). Apparently, brushing your teeth might be linked to better heart health, too. According to a new study, people who brush their teeth three times a day — that includes Chad from accounting who brings his toothbrush to work — are 12% less likely to experience heart failure than people who avoid cleaning their chompers, Gizmodo reports.

The study, published in the European Journal of Preventive Cardiology, drew its conclusions by compiling dental and heath health data from 150,000 middle-aged and elderly Korean participants with no pre-existing heart conditions. Participants were surveyed about their oral health habits, and the researchers studied insurance data to track participants’ heart health over the following decade. The study adjusted for various heart health risk factors such as age and smoking history, and still found that people who brushed their teeth thoroughly and regularly were correspondingly less likely to develop heart conditions. The more you know!

According to the American Heart Association (AHA) also found that brushing for at least two minutes twice a day is recommended for both your oral and heart health. The AHA's research found that people who brush for at least those four minutes total every day are three times less likely to experience heart failure, a heart attack, or a stroke.

However, while a 2018 study published in the journal Hypertension found that gum disease seems to raise people’s blood pressure due to the inflammatory nature of periodontal disease (a fancy way to refer to gum disease), the AHA says that there is still not enough evidence to suggest that oral health can prevent heart disease in and of itself. According to the AHA, this is because there are so many shared risk factors for gum disease and heart disease, such as age, smoking, diabetes, and other conditions that increase inflammation in the body.

If you’re trying to figure out how to find a dentist, your state might be approving ballot measures to extend dental health coverage to those who need it most, according to the Pew Charitable Trusts. In the meantime, you might need an extra incentive to brush amid all the sugar this holiday season, but remember: you only have to brush two minutes at a time, so pick a solid song to rock out to with your toothbrush and have at it.