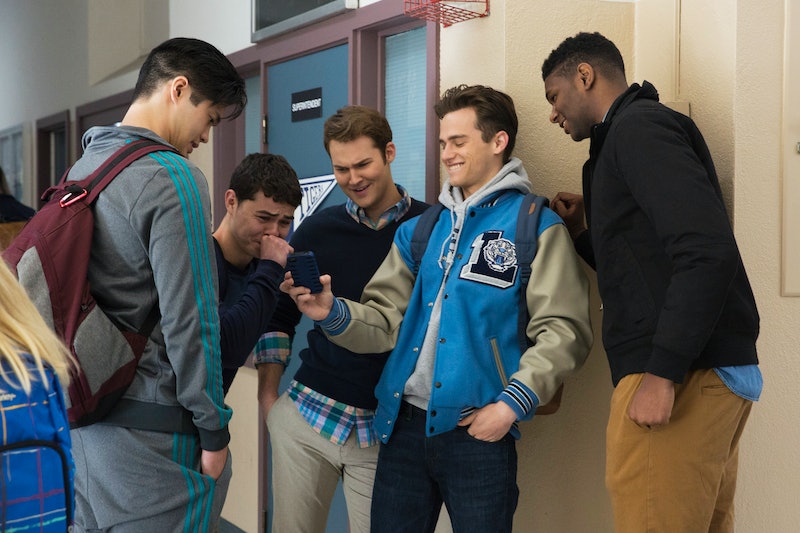 The very premise of 13 Reasons Why suggests that the series is filled with villains. It centers on the story of Hannah Baker, a high school student who killed herself and left behind a set of cassette tapes explaining why. Each reason is directly tied to a person in Hannah's life, and yet in the Netflix adaptation of Jay Asher's book, none of them are presented as the type of evil antagonist you'd expect. Instead, each character is fully fleshed out and explored outside of their relationship with Hannah, including (spoiler warning) the one whose harassment and eventual rape of two girls significantly impacts Hannah's decision to end her life. Bryce, played by Justin Prentice on Netflix's 13 Reasons Why, is reason 12, but early episodes avoid giving any hints about his impending assaults. Instead, the series' creators portray Bryce as a stereotypically obnoxious, but seemingly harmless, jock that many viewers have encountered before, making his later assaults even more terrifying.

Though delving further into these characters causes some major deviations from the novel, Asher, who was also a consulting producer on the series, tells me that he was completely on board.

"It doesn’t excuse anything that’s done, but you get to understand that even [with] bad decisions people make, there are reasons behind those bad decision," he says, citing the character of Justin, who facilitates Bryce's first rape, as a particularly notable example. "It kind of plays with this gray area that, in life, nothing’s ever really completely black or white, there [are] always reasons behind things, even if they’re not good reasons."

When Prentice took on the role of a "serial sexual assaulter," someone who makes multiple horrifying decisions, he hoped to avoid portraying the character as an unrealistically one-dimensional bad guy.

"One of the things I wanted to do with Bryce was to make sure that he was a human being. I didn’t want to portray something that was disconnected from reality," Prentice says. "Not that it’s necessarily a redeeming quality, but he takes care of his buddies. So, he’s a good friend in certain aspects, which makes him a little bit more relatable, which makes the things he’s capable of doing even more grotesque and surprising."

As a show aimed at teens, it's incredibly important that 13 Reasons Why demonstrate the very real risks of sexual assault and bullying. By making Bryce "a real high school kid," the series shows that being a good guy on the surface doesn't stop someone from being capable of rape.

"Most of these cases of sexual assault and violence aren’t by people who were born with different brain wirings," Prentice says. "You know, they’re not these Ted Bundys — I mean those cases do happen of course — but the majority of these cases are opportunistic sexual assaults." Indeed, in eight out of 10 rape cases, the victim knew their assailant, according to the National Sexual Violence Resource Center (NSVRC), and there have been multiple cases of convicted rapists' academic or athletic achievements affecting their defense.

"The Bryces of the world are all over the place."

In 2012, two high school football players in Steubenville, Ohio were charged with raping a female classmate and the ensuing, highly publicized trial (which resulted in both of their convictions) exposed the "special treatment" that athletes in the town received. In another explosive case in June 2016, Stanford athlete Brock Turner was convicted of sexual assault and sentenced to six months in prison, as reported by The Guardian, despite the fact that his convictions were punishable with up to 14 years in jail. When Judge Aaron Persky read the sentence, he cited Turner's character references, age, lack of criminal record, and the influence of alcohol as reasons for his decision, and infamously stated that a longer sentence would "have a severe impact" on Turner's life.

If Bryce had stood trial for his crimes in 13 Reasons Why, he may have used a similar defense. Bryce is young, doesn't have a criminal record, is lauded for his athleticism, has a family and friends who would characterize him in a positive way, and committed sexual assault while under the influence of alcohol. To say that his rapes of Hannah and Jessica had a "severe impact" on their lives would be an understatement.

"It’s date rape, which is even more terrifying, because these are kids that maybe wouldn’t be capable of doing these things if they were brought up in different environmental circumstances, or if someone had educated them more on how harmful their actions were," Prentice says of such "opportunistic" assaults. "So that’s what’s kind of scary, that it could be anyone, unfortunately. The Bryces of the world are all over the place."

The scenes in which Bryce rapes Hannah and Jessica are both incredibly disturbing to see unfold on 13 Reasons Why, which Prentice thinks comes from their realism. Of course, that also means that scenes like these could be triggering, and many feminists have called for graphic rape scenes to be limited in film and television because so many are exploitative, gratuitous, and unnecessary. But it's hard to characterize the scenes in 13 Reasons Why as such. Considering how integral the assault plotline is to the story in Asher's book, depicting the scenes in the series is nearly unavoidable. And in some ways, their realism may serve an actual purpose.

"I wanted to make sure that I got it right. I did a lot research, I met with several psychologists, people who have had one-on-one conversations with people who have either been victims of sexual assault or have themselves committed sexual assault," Prentice says, adding that becoming the "bad guy" was "kind of eye-opening in a sense ... to see how these people are capable of doing what they do and why that could be and what steps can be taken to hopefully prevent this sort of stuff in the real world in the future."

The first step to preventing sexual assault is acknowledging how often it happens (according to the NSVRC, one in five women will be raped in their lifetimes, and one in 71 men), and 13 Reasons Why has the potential to have a huge impact in that regard thanks to its development of Bryce. First, he is painted as a typical jock who disrespects his female classmates in ways that should seem all too familiar to women.

"The intent was to see a little bit of the likability," Prentice says of his character in the first few episodes of the season. "Or at least the sense of 'OK, yeah, he can be a little bit of an assh*le, but he’s jock-y. I know this guy, maybe I tried to get in a clique with this guy in high school.'" But the actor also hoped to show "glimpses" of what was coming, especially when Bryce groped Hannah in a convenience store. ("That makes it pretty clear that he’s not the best human being," Prentice offers.)

Things eventually escalate and not only does the audience see Bryce rape two girls, but soon, multiple characters bluntly refer to him as a "rapist."

Because that's what he is.

Despite his "likability" there is no glossing over what Bryce did and the series makes that abundantly clear by using the word rape over and over again once his assaults are revealed. Sure, Bryce tries to justify himself to Clay by falsely describing Hannah's actions that night and making a sickening assertion: "she was practically begging me to f*ck her. If that’s rape, then every girl at this school wants to be raped.” But Clay presses him and won't give up until Bryce eventually admits, "You wanna call it rape, call it rape. Same difference."

This blunt exchange is key, because it identifies what happened as rape, even if Bryce (clearly portrayed as being in the wrong) is hesitant to use the word. It doesn't matter that there was alcohol involved, or that Jessica was passed out, or that Hannah stopped struggling at some point as he held her down. They were raped, and 13 Reasons Why acknowledges that repeatedly in the final episodes of the season.

The fact that characters like Justin, Clay, and Alex identify Bryce as a rapist is just as important.

"Bryce isn’t a Machiavellian 'I’m going to destroy your life' sort of person," says Prentice, and he's right. Bryce is the captain of a game-winning football team. He is a good friend to Justin. He is the guy you rolled your eyes at when he yelled something obscene at you in high school.

And he is a rapist.