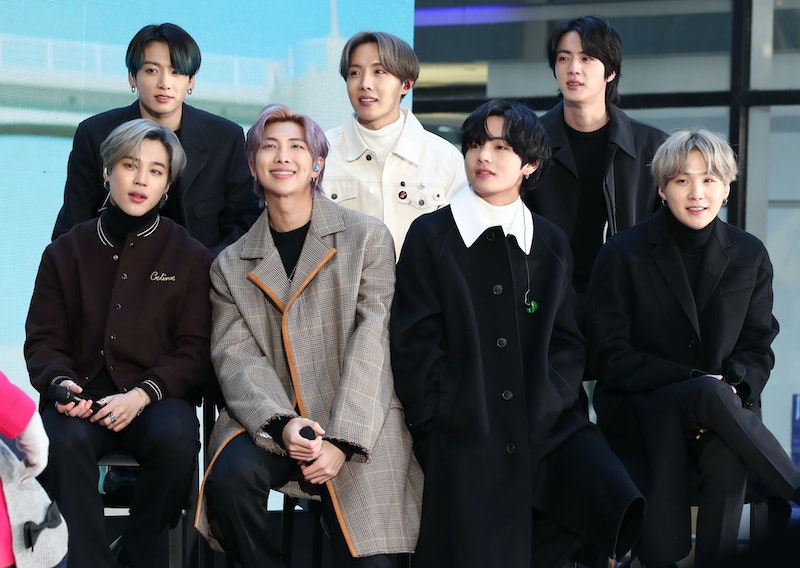 One day after K-pop fans around the world took over the White Lives Matter hashtag on Twitter to share montage videos of their favorite artists (known as "fan-cams" in the K-pop community), BTS tweeted their support for the Black Lives Matter movement. On Thursday, the septet tweeted, "We stand against racial discrimination. We condemn violence. You, I and we all have the right to be respected. We will stand together. #BlackLivesMatter."

As one of the world's most popular K-pop groups, BTS has an impressive reach. Their message went out to their 26 million followers, and was available in both English and Korean. In addition to tweeting their support, The Korea Herald reported that the group will be donating to an anti-racist activist organization, although the name of the group was not revealed.

Meanwhile, BTS fans have been showing their support for the Black community since the death of George Floyd on May 25. The band's fans, known as the ARMY, made #WeLoveYouBlackArmy trend on Twitter, and circulated petitions to end police brutality. Additionally, a charity group started by BTS fans, One in an Army, has been sharing resources on how to get involved with the Black Lives Matter movement and donate to relevant charities on Twitter.

On May 28, the fan group tweeted, "We hear #BTSARMY's passion for justice regarding the death of #GeorgeFloyd. Those of you requesting resources, our team found this, which has a google doc for petitions, numbers, & places to donate for #BlackLivesMatter advocacy." The tweet was accompanied by a comprehensive collection of resources.

BTS' message of support, along with their fans' commitment to sharing resources, is just one more way the K-pop fandom as a whole has stepped up in the fight against racial inequality and police brutality. After taking over the White Lives Matter hashtag in order to drown out the voices of white supremacists on June 3, the fandom has taken on the All Lives Matter hashtag, too. Their efforts are making social media a more inclusive space by not allowing messages of hate to be easily disseminated on Twitter during this pivotal moment in history.

Through the sharing of performance videos and memes, the K-pop fandom has found a unique way to lend their support to the Black Lives Matter Movement. And now that BTS has tweeted their own message of solidarity, it's easy to see why their fans are such a passionate and proactive community.