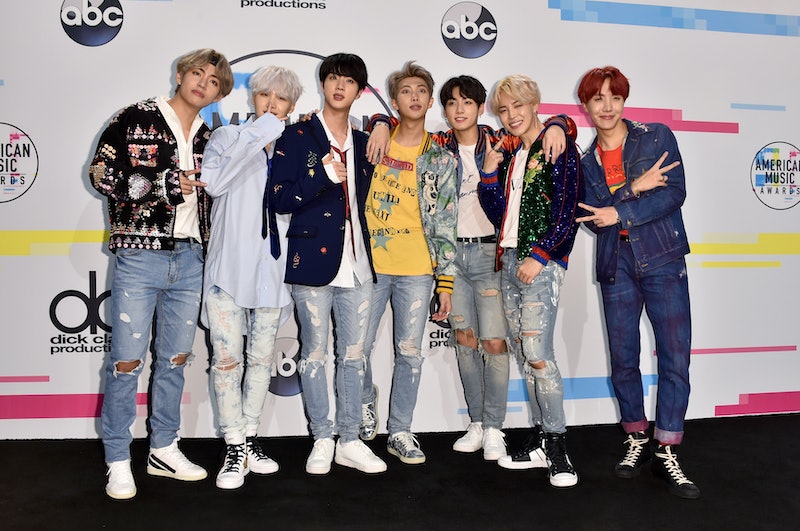 It turns out 2018 still has a few tricks up her sleeve, namely, a new single from a member of the K-Pop band BTS. In the hours before the world rings in the new year, BTS's Jimin dropped surprise solo single. And honestly, Twitter can't even handle it.

Just after midnight on Dec. 31 in Seoul, South Korea, Jimin released "Promise," a solo single that lets the performer and that angelic voice of his shine. In fact, he sounds like he's channeling Justin Bieber on this gentle track, which he released for free on Soundcloud. It's just him and an acoustic guitar, but he's wearing his heart on his sleeve with this pop ballad.

"I just wanna blow your mind," he sings in English on the bi-lingual track where he also sings in Korean. He later adds, "I want to be your light, baby," while also making it clear she's got to be her own light, too.

"Everyone, you've waited a long time, right?" Jimin tweeted in Korean when announcing the track, according to Billboard. "I finally shared my own song with the public. This is a song for me, as it is a song for you. It's the first time and it is still premature but please enjoy it. Thank you for waiting, ARMY.”

Jimin's latest solo single is his first non-album solo single, according to Billboard. It's also rare that Jimin releases tracks on the BTS Soundcloud, especially by himself. In 2014, he dropped the track "Christmas Day" with Jungkook, which was really just a BTS cover of Justin Bieber's "Mistletoe." Three years later, he teamed up Jungkook for a cover of Charlie Puth and Selena Gomez's “We Don’t Talk Anymore."

So it's no surprise then that BTS and Jimin fans were excited to see him out there doing his own thing. "I haven't stopped listening to Jimin's 'Promise,'" a fan named @jeonluminous tweeted. "The melody, the lyrics, the instruments, his angelic voice. It's SO HIM. And it couldn't be more perfect."

"Still listening to jimin's 'promise,'" Twitter user @pjmchimmy wrote. "His voice is so powerful." The single already had nearly 9 million plays on Soundcloud at time of publication — after just one day of being online.

For those BTS fans worried that Jimin's new single could lead to a breakup of the band, don't worry about it one bit. According to the credits for this song, Jimin, who joined the boy band in 2013, isn't the only BTS affiliate who had a hand in creating this one.

The song was co-composed by Jimin and BTS' frequent producer Slow Rabbit. It was co-written by Jimin and his bandmate RM. And the "Promise" single art featuring a photo of Jimin with arms wide open? Well, that was taken by Vante, better known as BTS member "V", who Jimin said was the "best photographer," according to Billboard.

Not to mention, the boy band rang in the new year together with a performance on MBC’s Gayo Daejejun. Fans even brought signs to celebrate "Promise" mere hours after it dropped.

But, the fans weren't the only ones giving it their all. "he didn’t have to go that hard," a fan named @247jimin tweeted about Jimin's New Year's Eve performance.

Clearly, this is just a sign of things to come. With 2019 fast approaching, it'll be interesting to see what Jimin and the rest of the guys in BTS will do next.

More like this
Ed Sheeran’s Surprise Gig Included An Iconic Britney Spears Tribute
By Bustle Editors and Darshita Goyal
Self Esteem's “F*cking Wizardry” Is An Anthem About Knowing Your Worth
By El Hunt
Mariah Carey Is Releasing Her “Lost” '90s Grunge Album
By El Hunt
Nicola Coughlan Shared A Lady Whistledown Excerpt From ‘Bridgerton’ Season 3
By Grace Wehniainen, Alyssa Lapid and Sam Ramsden
Get Even More From Bustle — Sign Up For The Newsletter