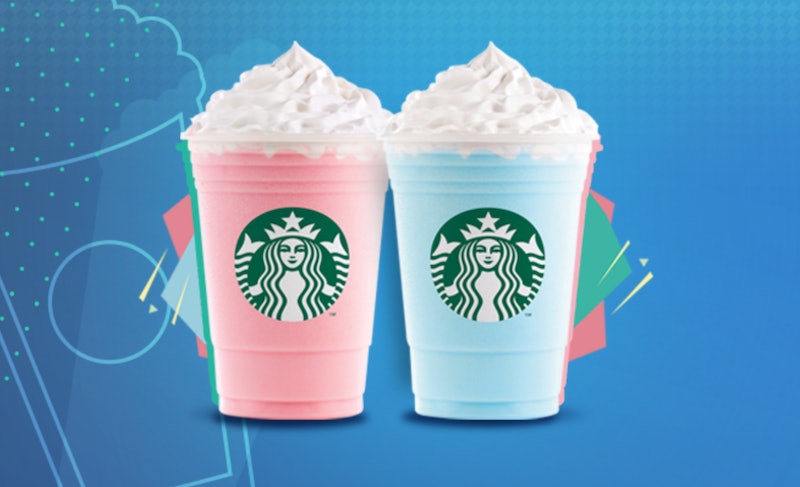 In the years since its launch, the mighty Frappuccino has become increasingly creative in its flavor options — and now, two new flavors have arrived that literally taste like candy: You can get Cotton Candy and Bubblegum Frappuccinos at Starbucks now. They look as sweet and colorful as their namesakes, although there are a few catches (because of course there are): First, they’re only available for a limited time — and second, you can only get them in Mexico. Sorry, uh… literally everyone else.

The drinks, which launched on Aug. 13, are part of Starbucks Mexico’s “Back to the Flavor” campaign — an end-of-summer initiative meant to push all our nostalgia buttons. As the press release for the drinks puts it (via Google Translate), “These new drinks will take you to the best moments of your childhood or adolescence in a single sip,” inspiring “the nostalgia and joy of remembering those incredible days when you would go out to play with your neighbors, jumping rope all afternoon or riding scooters after school.” I think the last line of the press release says it all: “This summer, Starbucks invites you to travel through time via the taste of memories to relive the moments that still make us smile.”

Both Frappuccinos are brightly colored, the Cotton Candy flavor a playful blue hue and the Bubblegum one — what else? — hot pink. In a lot of ways, the color palette reminds me of the Unicorn Frappuccino; there’s no color-changing action in either of these drinks, but the Bubblegum Frapp resembles the purplish-pink “before” color of the Unicorn Frapp:

While the Cotton Candy one looks a bit like the “after” version of it:

In case you need a reminder, here’s what the Unicorn Frapp looked like:

Not too different, aesthetically speaking, right?

Starbucks Mexico is operated by Alsea, a company based in Mexico City which also operates such chains as Burger King, Domino’s, Chili’s, and the Cheesecake Factory in Latin American and Spanish markets. The first Starbucks store opened in Mexico in 2002; today, there are nearly 700 stores operating in the country. The Frappuccino, meanwhile, was first conceived way back in 1993, finally arriving at Starbucks stores across the United States in 1995. And although the flavors initially offered were quite conventional — the only ones you could get were Coffee and Mocha — they’ve certainly gotten more adventurous with time.

The Unicorn Frapp probably represents the most “out there” Frappuccino in history — but Starbucks Mexico has had a few exclusives over the years that give it a run for its money. Remember the Mermaid Frappuccino? The Green Melon Crème-based Frapp debuted in Mexico at about this time last summer, piggybacking off of the mermaid food trend that was all the rage at the time.

I would argue that the Cotton Candy and Bubblegum Frappuccinos are similarly cutting-edge (insofar as a Frappuccino can really be said to be “cutting edge”; it's just a drink, after all), because, I mean… well, the only fairground-inspired Frappuccinos we’ve ever seen in the United States have been much more typical: In 2016, the Caramel Waffle Cone Frappuccino arrived as a limited edition summer drink — and while it was delicious, it was also quite similar, flavor-wise, to a standard Caramel Frapp.

The Cotton Candy and Bubblegum Frappuccinos both arrived at select Starbucks stores in Mexico on Aug. 13; they’ll only be around for a limited time as long as supplies last, though, so if you A) want one, and B) happen to be based in Mexico currently, you’ll have to act fast. Have fun, kids!

More like this
On TikTok, Tinned Fish Date Night Is The Latest Viral Food Obsession
By Emma Carey
10 Pumpkin Recipes That Are Way More Creative Than Pie & Lattes
By Rebecca Deczynski and Alexis Morillo
Why TikTok Is Flooded With Controversial Videos About "Pick Me Girls"
By Courtney Young
This TikTok Song About An Unrequited Romance Has FYPs In Shambles
By Emma Carey
Get Even More From Bustle — Sign Up For The Newsletter