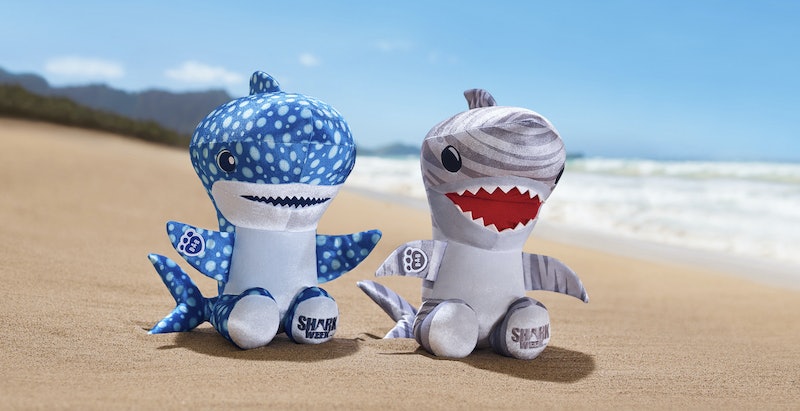 Sharks are cuddly. I know that sounds incorrect and also maybe dangerously misleading, but, hear me out. Build-A-Bear's Shark Week line, in collaboration with Discovery, is here to give you all the summer shark snuggles you'll need. Sure, I wouldn't recommend snuggling up to a shark in the wild. But when they're in stuffed animal form? Yes. And you'll want to have something to hold onto as the most thrilling week of the year, Shark Week, approaches.

Discovery has made my ~jaw~ drop in many ways. Because of this channel, we all watch naked people trying to survive in hostile environments like it's normal. But it's Shark Week that brings jaw-dropping moment after jaw-dropping moment. From shark bite stories to the scientific studies of Great White migration, there's a program for everyone. You're not going to want to get in the water, or venture away from your television, from July 28 to Aug. 4. That's when Shark Week airs, and it's going to bite quite a chunk of time out of your schedule.

Sharks, in the meantime, are getting a cuddly makeover courtesy of Build-A-Bear. The collection, which is available in stores and online, includes both plush sharks and coordinating outfits and accessories. Make plans with your couch and your totally adorable new stuffed shark — these plush sharks are so cute next time you see a fin in the water you might say "awww" instead of scream.

The Shark Week Tiger Shark and the Shark Week Whale Shark both start at $29. You can keep the sharks basic, as they would appear in their natural habitat, or you can dress them up to emphasize the cuteness and play down their sharp, uninviting teeth. Prices range from $4.50 to $63. Your plush shark will blend in on the boardwalk when it sports a two-piece Shark Week swim set. Complete this rad look with a stuffed animal-sized surfboard, because your plush shark enjoys to hang ten.

The beauty of Build-A-Bear is that stuffed animals are given personalities. A teddy bear becomes a seaside tourist when you put a Great White Shark Week Hat on its head. The beauty of Discovery's Shark Week is that the channel responsibly explains shark's predatory instincts without demonizing them. When it comes to sharks, these sea creatures are often misunderstood. But through education — and with a little help from Build-A-Bear's snuggly collab — Discovery is making sharks a little less scary and a lot more fascinating.

It's not just your new favorite stuffed shark that gets all the cool Shark Week ~looks~ from Build-A-Bear. You can accessorize too. The Blue Shark Snap Bracelet is for humans. It's Shark Week, but make it fashion. Invite a Build-A-Bear plush shark toy to your Shark Week 2019 viewing party. I promise that the week will go ~swimmingly~ once you have a stuffed Tiger Shark with its own surfboard to cuddle up to — and you'll definitely need a copilot to brave all the harrowing tales from the deep blue!