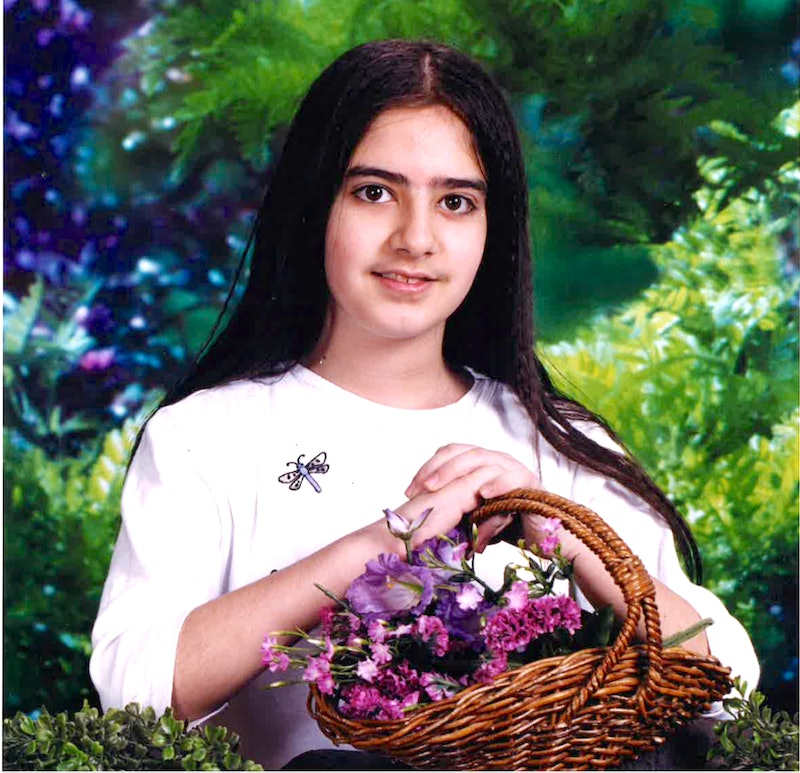 The author in the 5th grade.

I folded the note back up carefully, unsure what to do with it. It wasn’t meant for me, at least not directly. The note had been carelessly left on a classroom table, the debris of an earlier group project between the seventh grade boys. In some warped, backwards way, it felt like a victory: At the height of puberty, I had managed to be so hideous that my classmates couldn't even taunt me to my face.

“Shit,” I thought excitedly, “I can live with that!”

I came into this world with what my 12-year-old self described as a shaggy, grizzled unibrow. I surmised that it had something to do with being Arab — with being Lebanese, specifically — because no one else in my class was, and no one else looked like me. The only person who resembled me was my mom, and she fucking loved her eyebrows. She told me stories about being stopped at a wedding in her tiny Lebanese village because the photographer loved the drama of her thick black eyebrows framing green eyes. In Lebanon, she said, people actually envied her.

I had fantasies of taking a napkin and wiping my eyebrows off, like dirt, whereas my mom’s friends were filling their eyebrows in, and in some cases, getting them tattooed on. Have you ever seen someone with tattooed eyebrows? Harsh but striking, the look did not mesh with the version of beauty I saw in my everyday life, where even the "awkward" protagonists of coming-of-age sitcoms had soft features and seemed impossibly aspirational. I remember watching Lizzie McGuire, the preferred after-school programming of myself and my peers (mostly for Gordo). Who could forget when the eponymous title character shouted, "I want a bra, OK? A bra! WE want a bra!"

"I want aesthetician-grade hydrogen peroxide for my gnarly facial hair, OK?" I remember thinking. It just didn't have the same ring to it.

My mom wouldn’t let me touch my own eyebrows until I was a teenager. She tried to placate me by directing me to the closest thick eyebrow-adjacent model of Western beauty, exclaiming, “Brooke Shields!" Despite her best efforts to convince me my brows were a good thing, I eventually got permission to deal with them. At the waxing salon, I jolted when the follicles first tore from beneath my skin, but every subsequent rip of the paper felt like a salve. My brows weren’t even, and my skin was glowing an angry red but dammit, there were two brows, and so began my crusade to fell every offending strand. Waxing lead to a more precise threading, and by the time I graduated high school, I was left with two thin dashes.

I continued to manage my brows this way until I was 18 years old, attempting to shake off Sasquatch well into college. "Would you make them thinner please?" I said at the threading salon, a day before flying to Beirut for the first time in years.

Once I landed at Rafik Al Hariri Airport, I was hit with the overwhelming feeling of comfort that comes with being surrounded by people who look like they could be your family. Big dark eyebrows framing big dark eyes, the very kind that had caused me so much anxiety when I looked in the mirror. Why do they soothe me, I wondered, now that I see them on someone else?

It was more than just aesthetics. To hear Arabic spoken so freely, the same dialect, the same way everyone said goodbye, like my mom and aunties over the phone ("yalla, bye") moved me. I knew I couldn’t stay in Lebanon, but I wanted a part of that world to return with me to the United States. I wanted to greet people with a mark of my heritage present for all to see.

And I started with slowly growing my eyebrows back.

Cue the Lebanese Rocky montage: Cousins ushering me into salons at high noon in Beirut while the entire city was on a collective lunch break-meets-siesta, a whole lot of staring into the mirror wondering if the unkempt growing process would be worth it for the end result. It's going to take time, my cousins would say somberly as I became queasy at the sight of green shadow beginning to tinge my forehead as my eyebrows began to thicken.

While I was waiting for them to grow back, I still needed to get them groomed. The aesthetician used tweezers for ultimate precision — not a single hair could be sacrificed needlessly in this feckless task. I had the luxury of being in Lebanon for almost two months, and went back to the salon three or four times while trying to keep the stubborn hairs from meeting in the middle myself in between sessions. Each time, the stylist would shape my brows, keeping what she could until my once errant, stray hairs began to close rank around one another.

When I returned to the United States, no one really cared about my new brows. But the trip itself, eyebrow therapy included, sparked my own interest in learning more about my heritage and paying tribute to it any way I could. That year, I added Middle Eastern studies to my major and learned how to read and write in Arabic. As I was exploring YouTube using search terms like "Arab eye makeup tutorials", I slowly began to notice makeup bloggers adding another step to their routines: Using full-fledged "eyebrow kits" to create larger, fuller brows from scratch. The days of a simple angle brush dipped in dark eyeshadow were just starting to fade, and the time of the full eyebrow had begun.

The thick eyebrow trend is in full effect now, and mine are getting just as much attention as they did when they were a single, fuzzy entity — except now, it's all positive. I've often wondered how middle school me would have reacted to people stopping adult me in the street to ask what my technique was. Microblading? Tinting? How would tiny Emma feel about the fact that some of the same people who used to tease her were spending money on eyebrow pomade, pencils, brushes, palettes, all in the name of thick brows?

I wish I hadn't let their opinions shape my own perception of myself and self-worth. I wonder if my age, maturity, and connection to my Lebanese identity helped me stop caring about what people thought, or if it's simply easier because Western beauty standards have caught up to thick, sometimes even bushy, eyebrows. If I was 27 in the thin-browed world of 2002 instead of today, I would like to think that I'd be proud to resemble the matriarchs of my family, as I am now, but it's also possible that I wouldn't be. The pressure to feel like you're living up to the beauty standards of the time and place you live can be consuming. I do know one thing for sure: When the trend tables turn and skinny eyebrows peek out from behind (maybe very tiny) sunglasses once more, I'm not going anywhere near the tweezers.

More like this
Glitter Eyebrows Are The Y2K-Style Makeup Trend Going Viral On TikTok
By Paris Giles
Does Valentino’s Twin Liner Live Up To The TikTok Hype?
By Olivia Rose Ferreiro
This Week’s New Makeup Releases & More Beauty Headlines
By Audrey Noble and Erin Stovall
15 Talc-Free Makeup Brands For Safer Eyeshadows, Powders, & More
By Audrey Noble
Get Even More From Bustle — Sign Up For The Newsletter