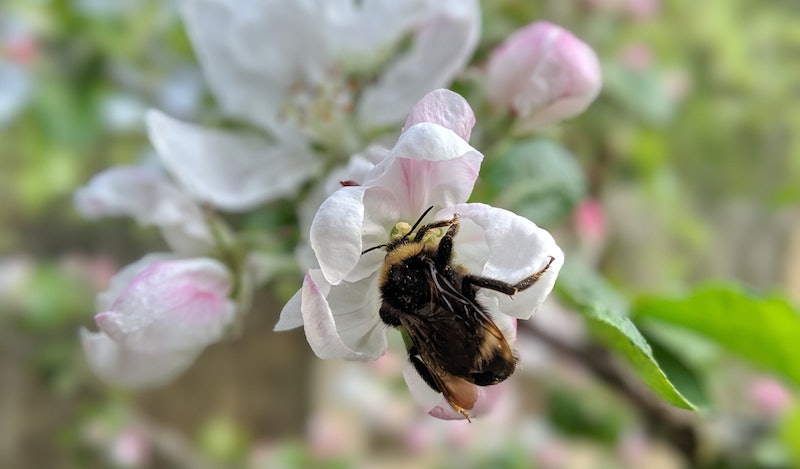 The only associations you may have with bumblebees are Burt's Bees lip balms and the fact that we interpret them as the slightly friendlier cousin to the ferocious wasp. But bees are actually incredibly important to our eco-system, and have their place in the food chain. So the news that the extreme weather of 2018 affected bumblebees negatively is fairly alarming. Allow me to explain.

Proving climate change affects just about every living creature on earth in some way, a report by the Bumblebee Conservation Trust has revealed that the extreme weather conditions of 2018 had a huge impact on the bees.

Just to re-jig your memory, 2018 saw snow storms and freezing weather early in the year, which was then juxtaposed with a swelteringly hot summer. In summary, the weather swung from one extreme to the other in the space of just a few months.

So how exactly did this affect the bumblebees? Well, the adverse weather in February and March, caused by the "beast from the east" delayed bumblebee season, meaning numbers of bees only got back to regularity come July. The reason for this, experts believe, is that Queen bees came out of hibernation later than usual, so did not produce and rally their bumblebee forces until later in the year.

But the trouble didn't end there for our fluffy little friends, as the scorching heat wave we experienced in the summer months meant that flowers dried up and wilted, leaving less food for them.

In fact, 2018 was so bad, that species of common bees including the garden, buff-tailed, heath and white-tailed bumblebees were at lows, and the early bumblebee had its worst year since 2012.

While 2018 could have been a fluke, it sounds as though the effects of the year could have a knock on effect into 2019, with potentially less Queen bees making it into hibernation in time to come out this spring/summer.

It's not all bad news though; despite common species of bumblebee struggling, other unique species which emerge later in the year appeared to thrive.

Richard Comont, science manager at the Bumblebee Conservation Trust, told the Guardian of the news: "it is great to see the four ‘biggest species winners’ from our latest BeeWalk data are rare bumblebees."

However, he did continue: "It’s concerning to see four of our seven commonest bumblebees have declined over the last nine years.”

So how can you help the bees, and why should you even care?

Well, as the Soil Association reports, bees are some of the best pollinators in the animal kingdom. If you can't remember your GCSE science teachings (and who really can), here's a reminder: when flying from flower to flower, bees spread their pollen, which helps to fertilise certain plants, including many crops which grow our food. Bees are therefore crucial in the food chain, and if they were not around, it would impact our crops and by proxy, our diets.

For this reason, it is concerning that the changes in climate could affect the bee population. So how can you help? The Social Association has a great page on how to help the bees, including taking action by avoiding pesticides harmful to bees, planting your own herbs and bee-friendly plants in your garden, and shopping for certified organic food.