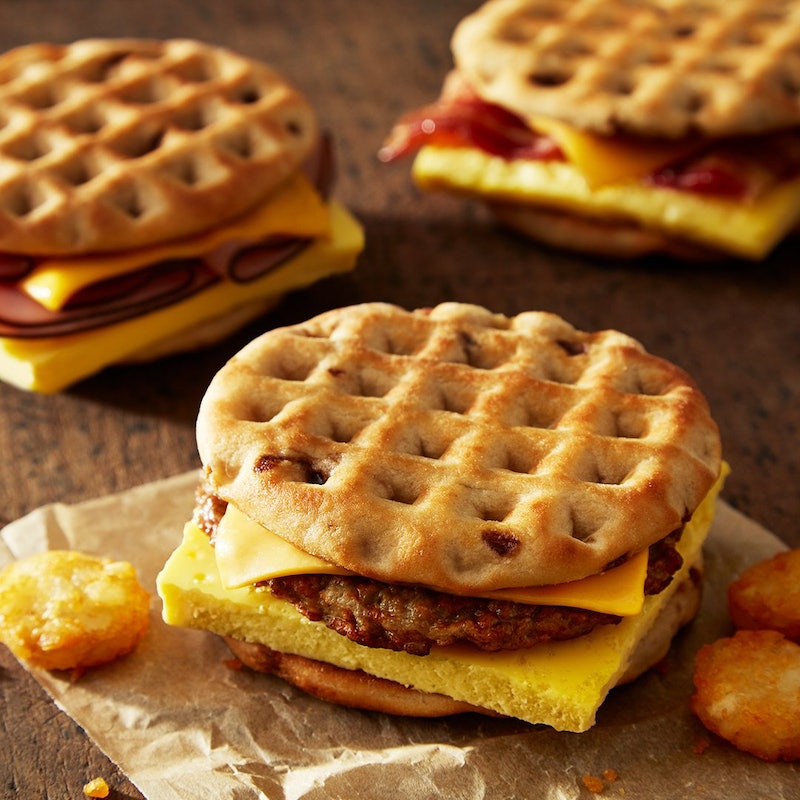 If you’ve been looking for a way to shake up your breakfast routine, here’s something that might be worth trying: Burger King just launched three Maple Waffle Sandwiches as part of their breakfast service. Available for a limited time at participating locations, these sandwiches do exactly what they say they do — that is, they present to you all the delicious goodness of an egg, cheese, and meat-filled breakfast sandwich, except that instead of using a croissant or biscuit as the “bread,” they use two waffle-esque pastries instead. In some ways, the sandwiches resemble the Waffle Tacos with which Taco Bell launched their breakfast menu back in 2014. The Waffle Taco, however, was discontinued in 2015 — so if you’ve been missing it ever since, BK’s Maple Waffle Sandwiches might be the best way to recapture that waffle-y breakfast experience.

The Maple Waffle Sandwiches originally hit the test market back in April, although they were only available in one city, according to Chewboom: Newark, Ohio. At the time, you could also only get them as part of the “2 for $4 Mix Or Match” breakfast deal. As of Aug. 15, though, the Maple Waffle Sandwiches are now available nationwide; what’s more, you can get them both as part of a combo or a la carte — so, y’know, if all you want is a single one of these sandwiches, you can finally make that happen. Hoorah!

It’s worth noting that the waffles are a little different than standard waffles. Bear in mind that their official name is “Maple Waffle Bread” — and, indeed, they do look more bread-like your typical waffle. They also don’t appear to be the same kind of waffle that made up the Chicken and Waffle Sandwich Burger King tested back in 2014: Photographs of the Chicken and Waffle Sandwich show a pair of waffles that look more like regular waffles, with a deep cross-hatch pattern and slightly irregular shape, whereas the Maple Waffle Bread used in the new sandwiches has only the slightest impression of a waffle-like cross-hatch pattern on top and a symmetrical, circular shape. The Maple Waffle Bread is also described as tasting both “savory and sweet,” rather than simply sweet.

The Chicken and Waffle Sandwich never quite took off; according to one customer located in Pennsylvania who spoke to CNN after trying the test item, the waffles and Burger King’s regular chicken patty “together… just didn’t work well.” Additionally, the customer said that it felt like the sandwich was “missing something — like the sweetness of the waffle was trying to take the place of the syrup.”

Since then, though, Burger King has seen success using other types of sweet breakfast pastries as the “bread” for breakfast sandwiches. A trio of French Toast Sandwiches, for example, hit the BK menu as limited edition items in May of this year. Like the Maple Waffle Sandwiches, they’re filled with eggs, cheese, and your choice of sausage, bacon, or ham; two slices of French toast, meanwhile, make up the “bread” part of the sandwich. (Burger King had previously offered a French toast sandwich in 2006, as well, which looks similar to the 2019 edition.) And now, it seems the Maple Waffle Sandwiches has seen similar success: They did, after all, make it through a test phase to arrive on the menu nationwide.

All of these sandwiches effectively function as Burger King’s response to direct competitor McDonald’s McGriddle sandwiches, which originally launched in 2003. McGriddles basically took the classic McMuffin equation and swapped out the English muffin for pancakes (or “griddle cakes,” as they’re officially known); at the time, a savory breakfast sandwich that also had a hint of sweetness to it was pretty novel for a fast food joint, and the new item quickly became a morning favorite. Burger King’s main breakfast menu, meanwhile, has mostly stuck with savory options like croissants and biscuits over the years — but the French Toast Sandwiches and Maple Waffle Sandwiches bring something new to the table, so it’s possible there might be more savory-sweet options waiting for us in the future.