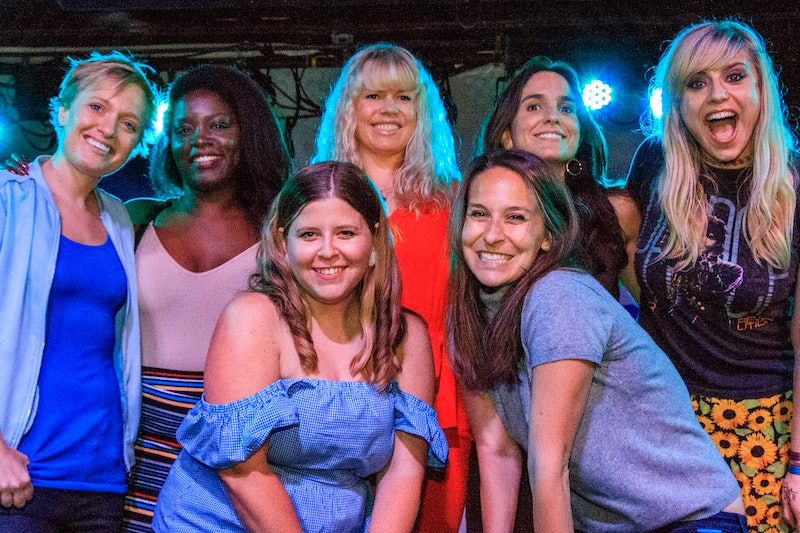 On Wednesday, July 12, as a part of the month's Comedy IRL package celebrating strong female voices in comedy, Bustle held the #IStandUpFor Showcase at the Knitting Factory in Brooklyn. The event featured five of the funniest female comics in New York, a photo gallery of Comedy IRL stars, and GIPHY Frame (GIPHY's GIF booth). In addition to laughs about every topic from body image to dating to cultural identity to politics, the event also benefitted a great cause.

The proceeds from the ticket sales for the show went to the organization Girls Write Now, a non-profit that focuses on community-building, mentoring, and empowering young women through writing. Girls Write Now uses its mentoring programs and workshops to help create real relationships between professional writers and aspiring ones.

The #IStandUpFor Showcase was emceed by Lane Moore, a comedian, musician, and host of the hit live comedy show Tinder LIVE!, and featured sets from four other hilarious female comics: Emma Willmann, host of The Check Spot on Sirius XM; Blair Socci, who recently starred in MTV's Ladylike; Michelle Buteau, co-host of VH1's Big Morning Buzz Live with Nick Lachey; and Charla Lauriston, who was listed as one of "8 Black Women Ready for SNL" by Essence magazine.

Check out some pics from the event, below.

These ladies had the audience in stitches, whether they were discussing marrying someone they met on Tinder, growing up as a Haitian immigrant in America, or what it's like to talk to your mom about your sex toy purchases.

Before and after the women took the stage, attendees could step into the disco ball-like GIPHY Frame to create their own custom gifs emblazoned with Comedy IRL branding.

A night of serious laughs, gifs to wow any group message, and support for an amazing cause that empowers women — what could be better than that?

To read more about some of these comics and other hilarious women who are using their platforms to elevate female voices and speak out on important issues, check out Bustle's Comedy IRL package.