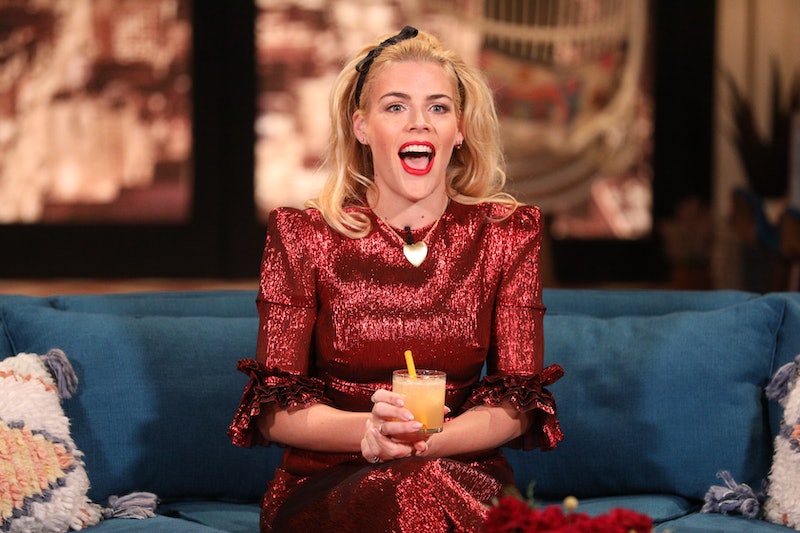 On the debut episode of Busy Tonight, Busy Philipps revealed a particularly interesting item on set: the "Oprah Phone." Kitschy, yellow, and perched on a shelf, it would serve as a direct line to Philipps, should Winfrey want to call. Well, on Dec. 20, she actually called, and Philipps' reaction to Oprah calling her will undoubtedly have you saying, "Same, girl. Same."

You know how you can get secondhand embarrassment in an uncomfortable situation? Or like, when someone yawns, you end up yawning, too? Watching Philipps on the phone with her idol will likely stir up some similarly empathetic emotions, so you might want to go ahead and grab a box of tissues now.

As Philipps was closing out the final episode before her show takes a hiatus, the kitschy yellow phone in the corner began to ring. Now, she probably never expected Oprah to actually call the Oprah Phone. It was more like a cute prop in honor of the legendary mogul, who paved the for female talk show hosts just like Philipps.

Lo and behold, though, the Oprah Phone rang, which caused sheer shock to instantly flash across Philipps' face. "No!" she yelled in disbelief. "No," she said again as the phone continued to ring, breaking out into tears of joy as she walked across the room to answer.

"Hello?" Philipps said, still seemingly not sure that the moment was real. "Hello!" Winfrey greeted the host in that sing-song-y voice that the world now knows so well. Philipps was clearly trying to keep it together as her idol continued to speak, but alas — the feels were just too strong.

"How are you?" Winfrey asked, to which Philipps hysterically replied, "I'm crying now and I have a cold, but I love you!" After they established that, yes, the Oprah Phone actually works, Philipps assured Winfrey that "anytime you want to call, we can talk about whatever — Harvest Day or just like, vegetables."

Oddly enough, Winfrey was actually in the midst of Harvest Day — which is when she brings in a bounty of goodies from her garden — and revealed that she'd collected "some of the hugest tangerines I've ever seen." Philipps was thrilled to hear this, of course, and Winfrey was thrilled with their shared love of vegetables in turn.

The hilariously emotional call concluded with Philipps telling Winfrey to "give the dogs and Stedman [Graham, the mogul's longtime partner] a kiss for me," to which Winfrey agreed and then extended an invite for the host to come visit. Philipps burst back into tears after hanging up, and quite simply could not get over what had just happened. Again, same.

The whole thing was pretty damn endearing. It's super rare to see a celebrity lose their sh*t like that, but it's super relatable, too. In that moment, Busy Philipps was all of us. Now go dry your eyes and bring in that harvest.