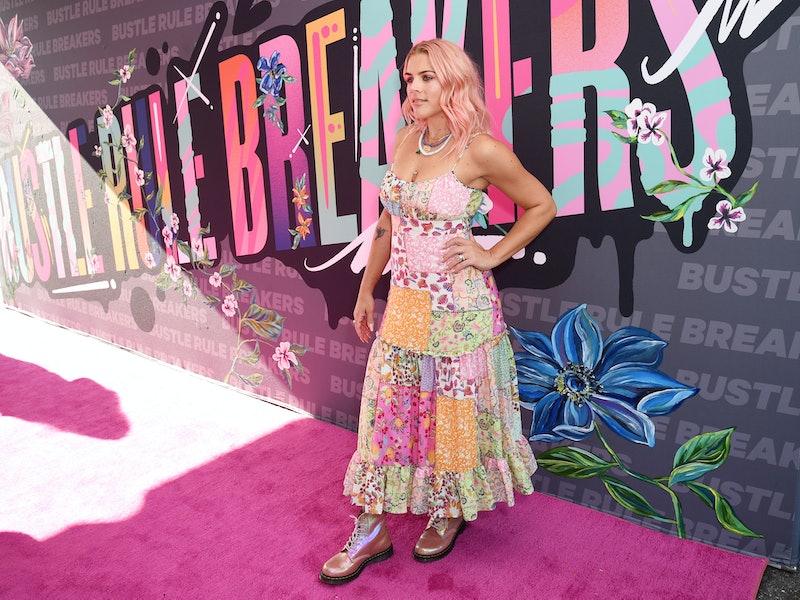 Busy Philipps' late night talk show may have been cancelled before its time, but if Philipps has anything to say about it, the show won't be gone for much longer. After months of outcry from fans, Busy Phillips revealed she's working on a Busy Tonight revival, so fans may get to see her don Mr. Nightgown once more before they know it.

E! canceled Busy Tonight back in May, but the short-lived show still looms large in the hearts of viewers and fans who miss seeing Philipps and her distinct point of view as part of the late night landscape. "People really connected with it, and we still hear daily from people who miss it, love it, want more of it," Philipps told Bustle on the red carpet at Rule Breakers, Bustle's second annual celebration of music makers and trailblazers. Philipps, who Bustle profiled in its annual Rule Breakers issue in August, made a special guest appearance on stage at the event at the LeFrak Center at Lakeside, Prospect Park. The love that fans still have for Philipps' show could be felt as the crowd joined in an "R.I.P." chant that Philipps started while speaking onstage at Prospect Park.

"We’re trying to give the people what they want and we’re trying to just figure out the best way to do it," she says. Though she declined to reveal whether Busy Tonight will find a new home on TV or pivot towards the internet, Philipps did reveal that the revival is closer to a reality than you may think. "I think we’re very very close, and "think that’s a great thing for all involved," she says, before joking, "Especially me."

The deep connection that fans felt with Busy Tonight was never more clear than in May, when an emotional Phillips responded to Georgia's decision to pass one of the most restrictive abortion laws in the country by sharing on air that she had an abortion at age 15. "After I shared my story, I heard from thousands and thousands of women and people across the country just like me, who are the one in four women who have had abortions before the age of 45," Philipps said onstage.

The decision to share her story on her show turned Philipps into a major reproductive rights advocate; after the episode aired, she started the hashtag #YouKnowMe encouraging other women to share their abortion stories and make visible how common and needed legal abortion is. In June, she testified before the House Committee on the Judiciary at its hearing on threats to reproductive rights, which she described in the Rule Breakers digital issue as "a week-long panic attack." Still, she felt like she needed to speak out for herself and the rights of women everywhere.

"I just refuse to let our collective stories go unheard by the old white men passing horrendous, restrictive, and dangerous laws," she told the crowd at Rule Breakers. "I decided to take the power back, and I decided that we have to be as loud as we can doing it."

In addition to being "loud," Phillips has one major piece of advice for other women looking to get involved in the fight for reproductive rights. "It's the same thing I'd tell anyone, [which] is just to vote [for] people who understand the importance of these laws and understand that [Roe v. Wade] needs to be protected both on a state level and a national level," she tells Bustle.

Philipps' decision to be loud and fight for the things that are important to her has opened up new possibilities and freedoms for her, especially as she pivots away from acting and toward Instagram and projects like Busy Tonight, which allowed her to share her true self with her audience. "The biggest thing is that I don’t feel like sh*t all the time," she says.