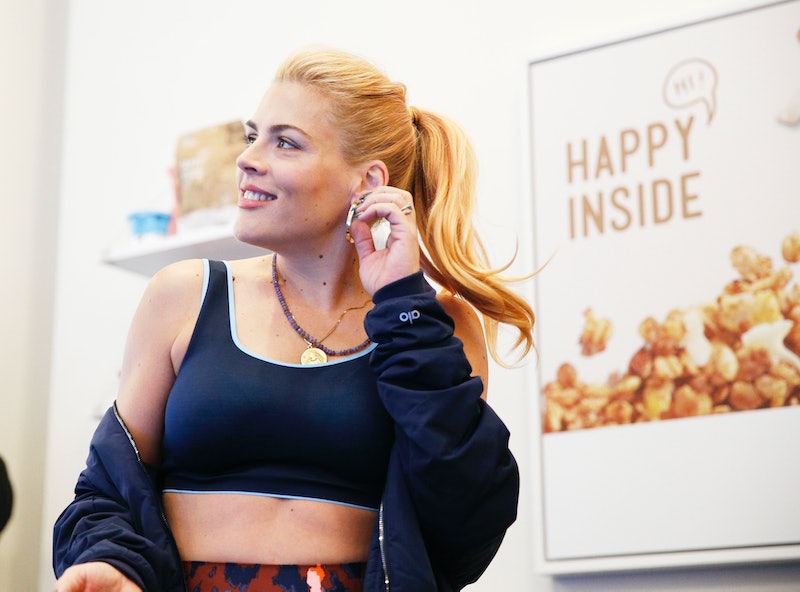 Courtesy of Hi! Happy Inside
By Melanie Mignucci
Feb. 6, 2019

Busy Philipps has been, well, busy. The actor, mom, and social media master released a book, This Will Only Hurt a Little, in 2018, and has been hosting her fellow celebrities on her E! News talk show, Busy Tonight. In between all of that, she still has time to keep her casual 1.5 million Instagram followers entertained through posting stories of her going through her day with her now-trademark witticisms. If you’ve ever tried to maintain an ~Instagram presence~, though, you know that all of this is hard freaking work. So how does Philipps balance her social media presence, her numerous professional commitments, being a mom, having a social life, etc., with, you know, taking time for self-care?

“I don't have any rules at all” when it comes to social media, Philipps tells Bustle at an event promoting Hi! Happy Inside, a new probiotic cereal from Kellogg’s. “I try to just keep it as intuitive as possible. My only general rule is if I’m questioning something, I won’t do it. I think if you have a little tiny bit of an itch that maybe something’s weird to put into the world, don't put it into the world. I think more people could use that advice.”

“There are many different kinds of gut checks, and that's one of them, too.” She’s talking about her work as an influencer, where she gets paid to promote products (such as Hi! Happy Inside) on her Instagram. “I'm really particular about brands that I partner with. It just always has to be something that I like truly feel.” For the partnership with Hi! Happy Inside, Kellogg’s newest cereal brand, part of the appeal for Philipps is the cereal’s focus on digestive wellness. (It has prebiotics, probiotics, and fiber to help strengthen your gut health.) “When I think about partnering with different brands, I think about the kinds of things that are important to me to put into the world. It's not worth it to compromise myself, even if you might not get called out on it” Phillipps says.

But being in the public eye (and being so open on social media) does come with its drawbacks. Philipps says, about being in the center of a firestorm on social media — as happened when the press picked up on her book's claim that her Freaks and Geeks co-star, James Franco, physically assaulted her on set — that “it feels never ending and so overwhelming. You get to the point where you feel like, why would I ever say anything interesting ever again?” (Philipps has said Franco apologized for the alleged assault.)

In those situations — which in today’s social media climate, can happen to anyone, regardless of level of fame — Philipps suggest taking a step back. “My husband came up with the analogy that it's like a kettle on the stove. When it’s boiling, and the steam is super hot and it’s really loud and overwhelming, you can just take the kettle off the stove. It all calms down, the steam stops, and it’s not loud anymore.”

Part of the frustration with the firestorm was that it “took away from what I was trying to do” with the book, Philipps says. If there was another message for the media to focus on, Philipps says, it would be about how women are “like tea kettles” — aka, how women have reached a boiling point when it comes to shouldering the responsibility of emotional labor.

“I'm not holding onto any feelings of responsibility for making the men around me who've made me uncomfortable, more comfortable,” Philipps says. “That was what I hoped a lot of people, and especially younger women reading my book would take away from it, is that you don't have to hold these things. You can let them go. And when you do let them go, it's not only incredibly freeing and liberating for yourself, but also puts pressure on men in a way that they haven’t, historically speaking, felt before.”

It's a theme that Philipps says has been emerging in her life for a number of years before her book. “There’s nothing wrong with taking control of your own career, your own health, your own mental wellbeing,” she says. And part of that has to do with the community that gets built through social.

"One of the things I realized when I started getting involved in Instagram and social media is that, everybody knows what social media is at its worst and grossest. But I do think at its best, it makes a very small community and a very small world, [where] people can feel less alone.”