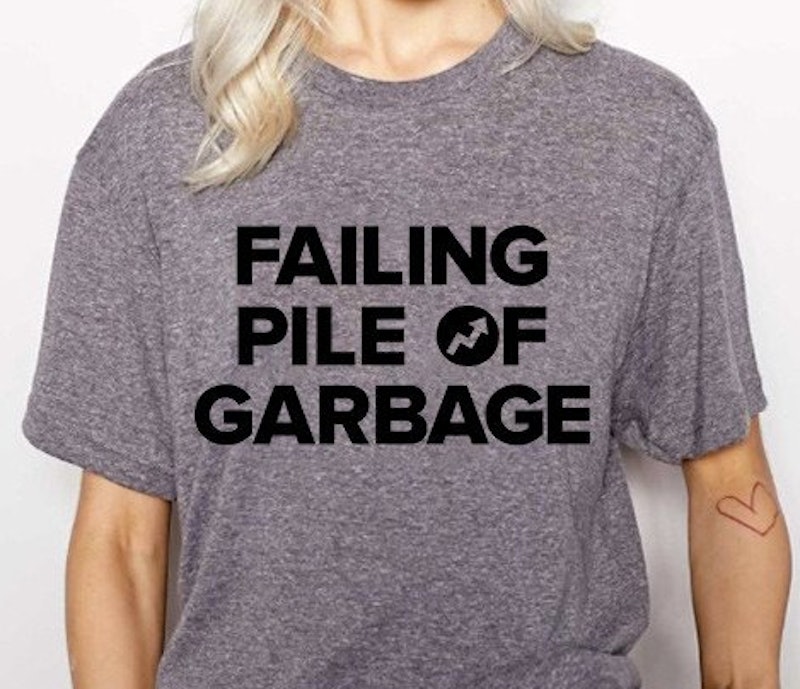 If you thought that political fashion got really good during election season, you'll be happy to know it isn't over just yet. Following some recent comments by President-elect Donald Trump, BuzzFeed jumped on the charitable tee bandwagon. Proceeds from their "Failing Pile Of Garbage" shirt were donated to the Committee to Protect Journalists. Unfortunately, the limited-edition tee appears sold out for now, but you have plenty other sartorial options to help organizations that will likely need your support during the Trump administration.

In case you missed the reference, earlier this week Trump called BuzzFeed a "failing pile of garbage" at his first press conference since winning the 2016 election, after they published unverified reports about the President-elect's alleged ties to Russia.

Instead of taking down the reports, BuzzFeed stood behind their decision to run the piece. “We stand with Ben [Smith, BuzzFeed's editor-in-chief] on his decision to publish this newsworthy document, which was reported on by multiple news outlets and seen by high level government officials including the president and president-elect,” CEO of BuzzFeed Jonah Peretti wrote in a note to the company, according to Politico. "We are going to keep doing what we do best, which is deliver impactful journalism.”

They also embraced Trump's comments in the most fashionable and statement-making way possible by designing shirts with the "failing pile of garbage" quote printed on the front and donated all proceeds to the Committee to Protect Journalists. The limited-edition sale is officially over as of press time but, according to Teen Vogue, BuzzFeed raised $25,000 for the organization.

They're not the first to design a charitable tee, either. If you're looking to support an organization that Trump's proposed policies might threaten, here are some of your buying options. Of course, you should also consider donating directly to other organizations that need your support.

This tee, designed by Doug's T-Shirts, gives proceeds to the Committee to Protect Journalists as well.

You might have seen this floating around during election season, but it's still in stock. The American Apparel shirt donates 50 percent of proceeds to Planned Parenthood.

As you probably can tell from the print, this shirt benefits the National Organization for Women.

If the first Nasty Woman shirt wasn't for you, you have some more options. All proceeds from this shirt benefit Planned Parenthood Advocacy Project Los Angeles County.

The Hillary Clinton-inspired shirt benefits the League Of Women Voters.

The International Center For Advocates Against Discrimination designed this shirt to support women's rights.

7. I Believe In Science

I Believe In Science, $25, ifeellikehillz.com

Although it came out during election season, this shirt is still in stock and gives all proceeds to the Natural Resource Defense Council.

You could start an entire new wardrobe just with shirts for a cause!