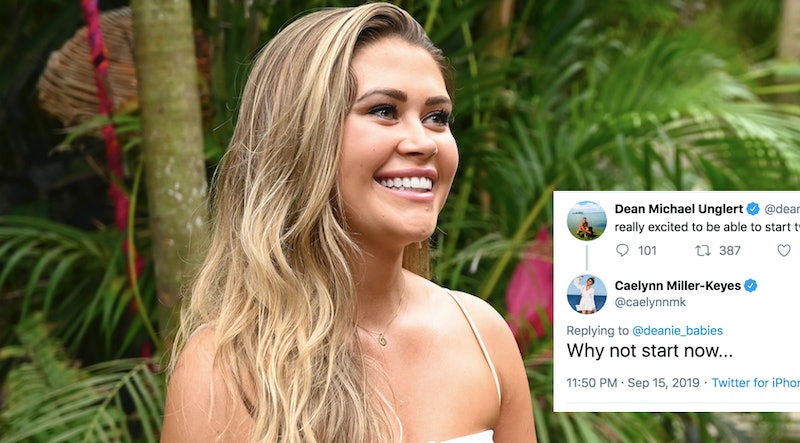 The relationship between Dean Unglert and Caelynn Miller-Keyes proved to be one of the most dramatic story arcs of Bachelor in Paradise Season 6. And while they ultimately decided to leave Mexico together on their own terms, some viewers may be curious as to how their romance is progressing away from the cameras. However, a recent flirty Twitter exchange between Caelynn and Dean pretty much confirms Paradise's worst kept secret and gives validity to what fans have already suspected for quite some time now.

Rumors that Caelynn and Dean are still dating after Paradise have existed for most of the summer, and the two of them haven't exactly gone to great length to keep their budding relationship under wraps. Several times they've posted photos on Instagram, detailing their various travels that just so happen to be in the very same places at the very same time. (Seriously, what are the odds these two coincidentally planned separate trips to Spain?) But since neither of them has come out to officially confirm that they're dating, their status as a couple has remained at least somewhat uncertain. That is, until their latest Twitter conversation all but solidified their fate as a romantic duo, proving that even they are getting tired of the facade.

"Really excited to be able to start tweeting about my girlfriend," Dean wrote on Sunday, Sept. 15, alongside the hashtag #tuesday, a likely reference to the reunion special taking place this week during the Bachelor in Paradise Season 6 finale. The last fans saw of Dean, he was sweeping Caelynn off her feet and into his van after asking her to leave Paradise with him so the two of them could be together and attempt to make their relationship work. This, in turn, makes his tweet rather telling, indicating that Caelynn is obviously the girlfriend in question.

But just in case that alone didn't send the message home, Caelynn responded to Dean's tweet with an equally telling remark of her own, writing: "Why not start now..." Believe it or not, Dean then proceeded to comment on her comment, writing, "lol you wish." So basically these two aren't even attempting to hide their relationship at this point, right? It is now painstakingly obvious that these two are still dating, making the reunion special almost completely unnecessary at this point (at least for them).

Typically, Bachelor in Paradise couples are discouraged from making their relationship status known to fans until the latest season of the show comes to a close, otherwise it could spoil the ending. But in the case of Dean and Caelynn, all rules are being thrown out the window, though given the unusual circumstances surrounding their relationship, it's kind of fitting. Dean lives his life out on the open road with no rules or structure, so it makes sense that his romantic life would follow a similar no-rules philosophy.

Their time in Paradise may have been rocky (that'll happen when you break up with someone on their birthday), but this Twitter exchange hints that they're stronger than ever and very happy together. So at the end of the day, maybe all that drama was well worth the effort.