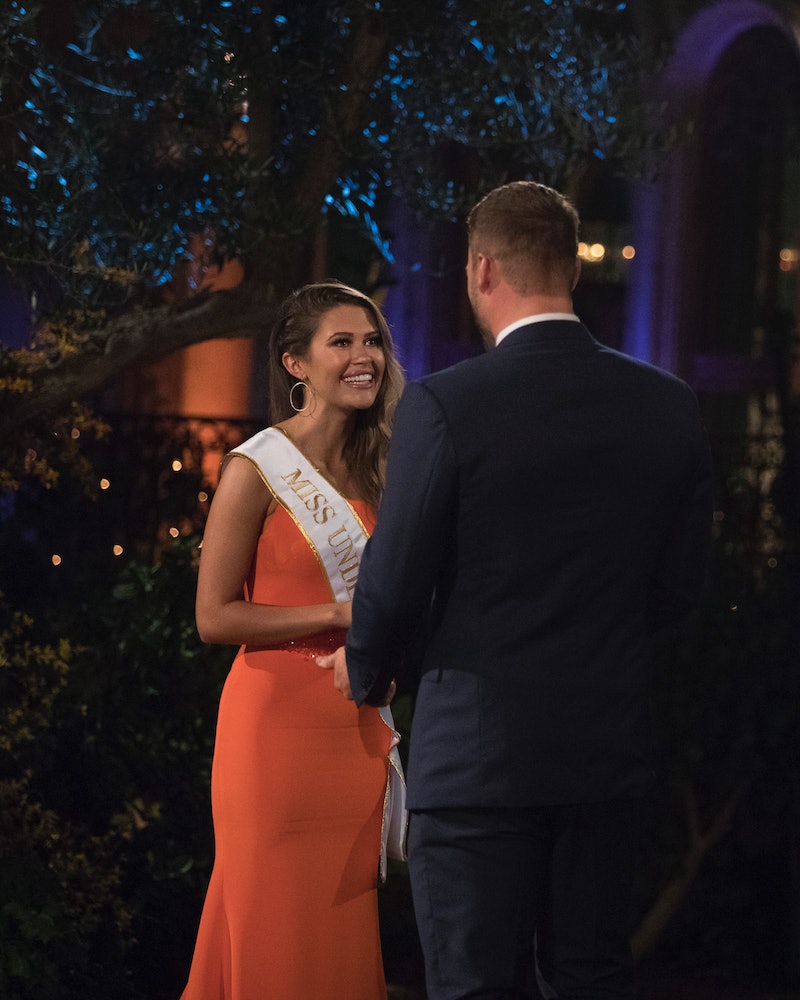 There are two pageant stars on The Bachelor this season, but one of them made more of a splash at the Miss USA 2018 competition than the other. While Hannah B. won Miss Alabama USA 2018, she didn't place at the Miss USA competition. But her fellow Bachelor contestant Caelynn's pageant videos prove that this Miss North Carolina more than deserved her first runner-up placement in the Miss USA contest.

First runner-up is equivalent to second place, which means Caelynn was one person away from winning the crown. But she doesn't seem to have any hard feelings about losing, and has had nothing but praise on Instagram for the Miss USA winner, Sarah Rose Summers. But Caelynn doesn't believe she's been afforded the same support from her fellow Bachelor star Hannah.

Caelynn revealed during the second episode that she and Hannah used to be friends and were roommates at Miss USA, but she claimed that Hannah couldn't handle Caelynn's Miss USA success. "She wasn’t happy that I was first runner-up. She was mad that she didn’t place, for sure. There were a lot of hurt feelings," Caelynn claimed to a fellow contestant.

Whether that's true or not, there's no denying that Caelynn deserved to be first runner-up. You can see her Miss USA pageant journey below. It started way back in 2013, when Caelynn was crowned Miss Teen USA for Virginia.

In this video she talks about cutting her own hair, loving Starbucks, and wishing she could travel to the 1920s.

Caelynn continued her pageant lifestyle when she won Miss Asheville and then competed and won the Miss North Carolina USA title this past year.

You can watch that emotional crowning moment here:

From there, Caelynn went on to compete in Miss USA 2018.

You can watch her speak about advocating against sexual assault in her intro video — it's a cause that's very personal to her, because she says she was assaulted in college.

At Miss USA, Caelynn competed in the bathing suit portion (seen at around 4:30).

She also walked in the evening gown portion.

Her dress there looks a lot like the one she wore to meet Colton on The Bachelor.

She also participated in two question rounds for Miss USA. In the first one, she was asked if she thought the move to add girls to the Boy Scouts was a good one. She answered that she believed that one day men and women would truly be equal, and she was glad steps are being made now. You can watch her answer at about four minutes in the video below:

Then Caelynn moved on to the Top 3 question, where she was asked what sign she would bring to a political march. She answered, "Your body, your rights," and spoke more about her advocacy for sexual assault survivors. You can watch that at about 3:50 in the below video:

Finally, you can see the crowning of Miss USA.

While Caelynn didn't win, she should be proud of how far she did make it. She also graciously supported her friend who did win, which shows that she can make it in any kind of competition — even one where she's competing with 30 other women over one man.