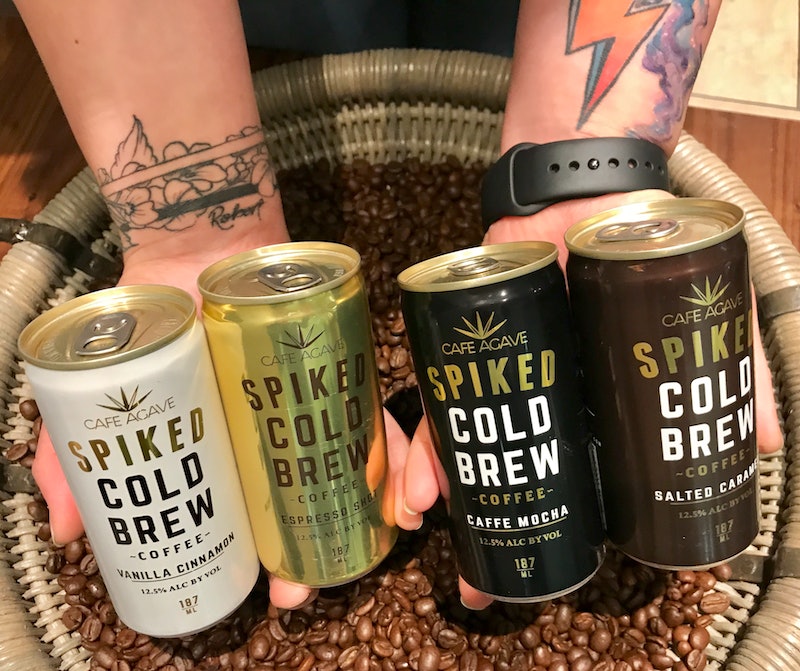 By now many of us are so locked in such a vicious cycle of "CAFFEINATE ME!" and office happy hours that our bodies are operating on their own lawless time zones, uncertain of whether it is day or night, or 5 o'clock somewhere. Enter Cafe Agave's Spiked Cold Brew Coffee, which not only is here to officially knock your body's internal clock into the Phantom Zone, but, uh, more than delivers on that "spiked" promise — the ABV is a whopping 12.5 percent, which for those keeping track at home, is an ABV comparable to most wines.

The introduction of the canned beverage to the U.S. market was announced on Oct. 18 in a press release, which also introduced the four flavors: espresso shot, caffe mocha, salted caramel, and vanilla cinnamon. The 6.3-ounce cans will be sold individually and in four-packs, presumably so you can invite all your friends to also get hyper and a little bit sloppy at whatever the appropriate hour it is to drink this beverage. But what exactly the "appropriate hour" is for this is truly the next big millennial mystery. Is it a booze-y commuting breakfast drink? A pick-me-up for a lazy clubber who also likes to keep it classy? Perhaps nobody defines it better than Bustle's own Melanie Mignucci, who wisely describes it as "Four Loko, but artisanal".

The real question, of course, is how much caffeine is in this drink — according to Cafe Agave's website, each drink contains 38mg of caffeine, which is a little less caffeine than roughly half of a cup of regular brewed hot coffee (a full cup typically clocks in at 95mg). So those who are worried that the drink will disrupt them Four Loko-style can take some reassurance in knowing they won't be completely bouncing off the walls (assuming you stop at one or two of these cans).

And for what it's worth, it sounds like it tastes good?

“The coffee is brewed for 12 hours or more, delivering a smoother, less bitter experience than traditional brewing methods and its mass-market appeal is growing exponentially as people continue to discover it," said Cafe Agave Founder Mark Scialdone in a press release. "We saw the opportunity to create a new category of beverages that combined two of peoples’ favorite things — gourmet cold brewed coffee and alcohol.”

As for the "alcohol" part, according to the website, it's a "unique alcohol formulation of wine, real dairy cream, agave syrup, sugar, and natural flavors". The drink will be available starting in Nevada, Arizona, California, Washington, and Oregon before presumably rolling out to other states.

In the meantime, if you have coffee/wine FOMO, you do have a slightly less hardcore option — Apothic Wines released Apothic Brew, a cold brew red wine hybrid, earlier this year. While I have not tasted the Cafe Agave cans, I have tried Apothic Brew, and while not all of my coworkers were fans, I dug it immensely. The richness of it felt almost chocolate-y, and it doesn't actually have any caffeine (shoutout to my fellow millennial grandmas, whose bedtimes are also in the 9 p.m. range).

Anyway, as with all alcohols — particularly alcohols that are mixing two mind-altering substances — make sure to drink responsibly, and stay properly hydrated.