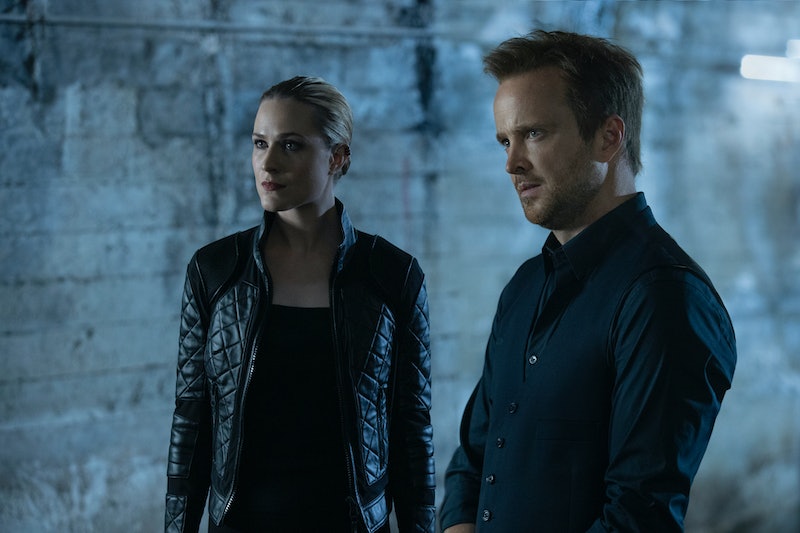 Spoilers ahead for Westworld Season 3, Episode 5. So far we've learned that Westworld's Caleb is an unhappy military vet mourning his deceased friend Francis, but the April 12 episode, "Genre," hints there's more to learn about him. As he trips out on a movie-hopping drug slipped to him by Liam, we see flashes of Caleb's past that hint he may not be the good guy we've been led to believe he is.

Caleb has been a mysterious figure from the start, with fans theorizing early on that he isn't even human, or that he actually died while serving in the military. (By his own admission, he did get shot in the head once.) Westworld star Aaron Paul likened Caleb to a "loyal dog" to Insider, saying that he "comes from a very complicated past" and "prides himself on trying to be the best person that he can be." But what if Caleb is misremembering who he is, or like Bernard once was, living on implanted memories?

When Liam scans Caleb's Incite file, he incredulously asks Caleb, "You think I killed your friend?" Liam looks really spooked by what he saw, and he jabs Caleb with the Genre drug, triggering an old memory of Caleb's that he assumedly buried. We see Caleb pushing a kidnapped man into a warehouse, where it's implied Caleb killed him. "You don't even know who you are," Liam says to Caleb. "You're the worst of them."

After Ash shoots Liam, the memories get strange, and it's not clear if and how Caleb's past is mixing with his present. We see Caleb recalling the moment he tried to stop Francis from bleeding out, for example, but suddenly he's saying, "It's OK, I'm not going to hurt you." Is he saying that to Liam, or did he once say that to Francis? Why? Does this imply that he wasn't close to Francis at all, or that Francis was his enemy?

We also get a brief glimpse of a professional woman in a grey top standing in a white sterile room and monitoring Caleb thrashing under medical restraints. This seems to give equal credence to the theories that Caleb actually did die or that he's a host. It's also possible that Caleb is still human, but he had to be revived using technology that now makes him half robot. His memories may be scrambled because being shot in the head shut down parts of his brain, so they had to revive him using host technology, or by inserting someone else's memories.

My personal theory is that Caleb is actually one of those human "agitators" that Serac kept imprisoned and experimented on. Liam tells Caleb he's a horrible person, and he dies saying Caleb "did it." The new memory suggests Caleb killed someone important and that he suffered from rage issues, enough that he had to be pinned down at a hospital. (We also see that same image of him sitting at the pier, but in the new memory he looks furious rather than sad.) The Caleb we know, meanwhile, is firmly against doing "personals" and seems relatively patient, loyal, and subdued. Is he a changed man because Serac smoothed him out in order to keep Rehoboam's "eclipse" clean?

If Caleb had any sort of connection to Serac, as well as an "on" switch like Bernard that reverts him to his past, rage-filled self, that may explain why Dolores is so interested in keeping him around — even going so far as to manipulate his Incite data. (It would also neatly explain why Caleb conveniently found Dolores after she staged that entire shootout with Connells.) My initial hope was that Caleb was there to teach Dolores that humanity is worth saving, but unfortunately this new evidence suggests we may be going in another direction, and Caleb is just another disposable pawn in Dolores' game.