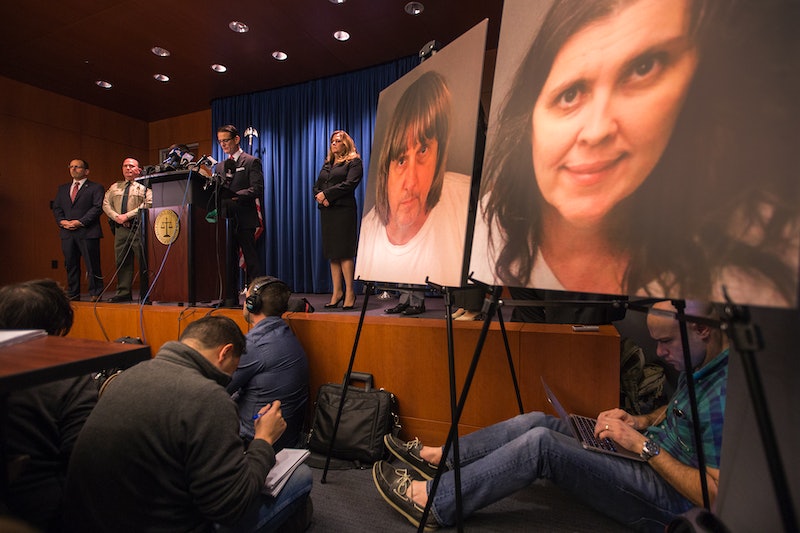 On Thursday, law enforcement officials held a press conference about the 13 California children who were allegedly detained by their parents for years in their home. The Riverside County District Attorney Michael Hestrin said that the parents, David and Louise Turpin, were charged with 12 counts of false imprisonment, torture, physical abuse, and child endangerment. Both parents, who are held on a $13 million per defendant bail, have pleaded not guilty to the charges.

Hestrin told the press that what the children went through was "severe physical, emotional abuse — there is no way around that." He added that the Turpin parents' alleged behavior was "depraved conduct" and that the young children were "often not released from their chains to go to the bathroom." They were allegedly often shackled as punishment "many years ago." The alleged abuse, according to the county district attorney, had been taking place since 2010. If convicted, the couple could face 94 years in prison.

The official said that the minors and adult children would be bound to beds in extremely unhygienic conditions for several weeks or months. According to the survivors, they were given permission to shower only once a year and in the case of failing to follow the rule, they would be beaten or strangled as punishment. Hestrin added, "The victimization appeared to intensify over time; what started as neglect turned to severe, prolonged, pervasive child abuse."

Officials say the children appeared malnourished. Perris Police Chief Greg Fellows spoke of their treatment on Tuesday and said, "If you can imagine adults who appear that they're children because they're so malnourished, and they're not being fed, and they're living in these filthy, dirty conditions ... I would call that torture."

According to Hestrin, the young teenager who escaped from the Turpin house had been planning to do so "for two years." The official said that the young girl took another sibling with her upon her attempt to flee the house but the younger sibling "became frightened" and returned to the residence. The ages of the Turpin survivors range from 2 to 29 years old.

The children were permitted to write in their diaries, according to Hestrin. "The only thing the children were allowed to do in their rooms was to write in journals," he said. Now those entries, which reportedly amounted to hundreds of journals, are being examined by law enforcement officials in their investigation.

The shocking news first emerged on Sunday after 911 authorities responded to a distressed call from one of the teenage Turpin survivors, according to the Riverside County Sheriff's Department. The 17-year-old survivor informed 911 that she along with her 12 brothers and sisters had been falsely imprisoned by her parents. She added that a few of her brothers and sisters had been shackled to different furniture in the house.

Upon reaching the Turpin residence, officials said in a statement that the mother was "unable to immediately provide a logical reason why their children were restrained in that manner." On Thursday, more details have emerged about the conditions the children were allegedly forced to live in.

As the investigation goes on, the children will receive medical care to recuperate, according to Susan von Zabern, who directs the Riverside County Department of Public Social Services. Speaking with reporters on Tuesday, Von Zabern said, "At this point, we’ll be doing a full assessment with medical professionals to better understand needs of the adults as well as the children, and we’ll be prepared to provide supportive services as well as engage other agencies in assisting these individuals to be stable."