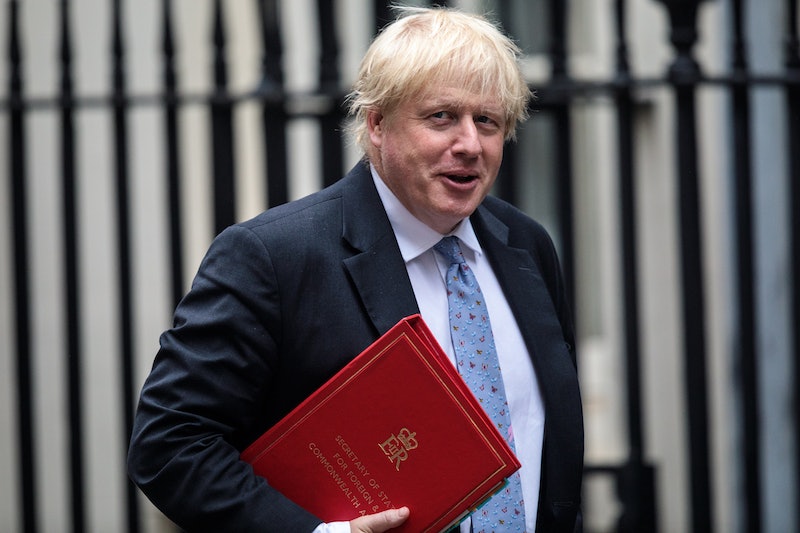 Louisa Compton is a commissioning editor for the Channel 4 investigative documentary show Dispatches, and tweeted on Monday of this week, "REQUEST: please can journalists STOP referring to Boris Johnson as just “Boris”. He’s a politician - we shouldn’t use first names for politicians - doing so is over-familiar and gives the impression they’re our mates, or much loved comedy characters." I spoke with Dr Joe Bennett, a Lecturer in Applied Linguistics at the University of Birmingham, to find out more about the implications of "Boris".

"I agree with the tweet," Bennett told me. "The way we use names demonstrates our social distance from a person. And first names are informal. It makes him seem like a cheeky chappie. It cultivates the idea of him as being a 'man of the people'."

I ask whether taking an informal tack in how we talk about him makes him somehow less accountable for his actions, by the press? Bennett suggests that it may well do — observing that calling him Boris was happening by those who felt positively towards him as well as those who don't. "A lot of people think it is okay to just call him 'Boris'," he said, "because he is a clown. There's a sense of 'it's just Boris being Boris'."

Bennett also notes that the use of first names and nicknames has previously cropped up in politics. There's a reason Jeremy Corbyn is called "Jezza", Margaret Thatcher was often referred to as "Maggie", and David Cameron's famously insisted that "lots of people call me Dave" on the Richard Bacon XFM show in 2006 — politicians tend to encourage it. "It gives us this sense of familiarity," Bennett said. "But really there's this huge gulf of power, and particularly in Boris's case, privilege, between us."

Dr Philip Seargeant, a Senior Lecturer in Applied Linguistics at The Open University, also reiterated this notion of demonstrative familiarity — likening this to something Bennett also said, in how companies and advertisers increasingly refer to customers via their first name. "It's this same sort of false sense of familiarity," Seargeant said, "that's happening when Johnson is always simply referred to by his first name by journalists."

He also believes it reinforces the character of "Boris" that Johnson has created. "It fits well with the slightly over-the-top, faintly comic character," Seargeant confirmed. "Being referred to simply by his first name also creates the expectation that everyone knows who he is, and in this way adds to his status."

He also feels that not only does this naming make him less accountable by the press, but that the press are actively complicit in his more unsavoury behaviour.

Seargeant continues that he can "make offensive remarks about people, but usually with some sort of unnecessary verbal flourish which somehow manages to deflect attention away from the straightforward bigotry. And in a way the press then become complicit in it all as they play up to this image of him in the way they cover him."

"We shouldn't underestimate the importance of creating a media-friendly character for a politician," he concludes, "as it helps with the general narrative they can then tell."