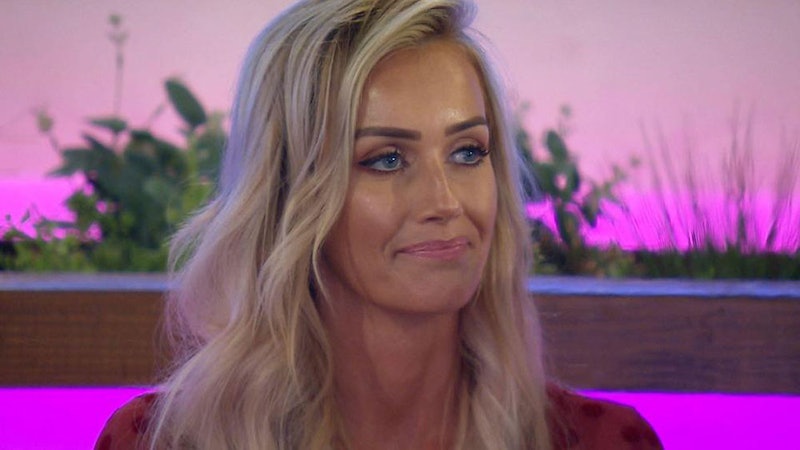 Love Island's Laura Anderson is back under cruel public scrutiny. On Tuesday, her partner Jack Fowler was asked on a date by new girl Alexandra Cane, prompting Laura to panic —fearing, no doubt, Wes Nelson and Megan Barton Hanson round two. But Twitter was not remotely understanding, labelling her a "psycho", "crazy", and "neurotic". This is problematic on a whole host of levels. Sure, it's a reality show — but there's a line. Using those labels for any woman, including Laura from Love Island, is actually deeply problematic, and here's why.

Before I get deeper into the implications of calling a woman "psycho", let's look at the context for a minute. Laura hasn't exactly had the easiest time in the villa. She broke up with Wes, who left to couple up with Megan. She's been on and off again with Jack, thanks to the lingering debate over whether he leaned in to kiss Georgia Steel, or whether it was a mutual move (and that doubt's just been reawakened, thanks to new boy Idris Virgo's claims). And in Tuesday night's episode, she was forced to confront her fear of losing her partner again, when Alexandra went on a date with Jack. Sure, he reassured her he wasn't interested — but is it any wonder his reassurances fell flat given Laura's turbulent romantic history in the villa?

Firstly, there's a long, misogynistic history behind the notion of the "crazy woman". As Bustle has previously reported, too often, women's legitimate emotional reactions are minimised or dismissed by the suggestion that they're just being "crazy." It's a notion that women have been forced, over centuries, to internalise, to the extent that doubting the validity of your feelings and perceptions becomes normal. Known as "gaslighting" — hmmm, where have we heard that before? — it's an emotionally abusive technique employed to undermine, belittle, and discredit someone's perspective.

Look just a little deeper into the past, and you'll discover that a wide span of women whose behaviour was considered at all disagreeable were pathologised under the catchall diagnosis "hysteria", as Refinery29 has stated. Anxious? Hysteria! Unhappy? Hysteria! In possession of an opinion that doesn't align with the patriarchy? Hysteria! So that cavalier response to Laura's Love Island behaviour carries a bit more baggage than you might realise. And FYI — most of it is pretty downright sexist. Even the fact that this video of Laura reacting to Jack going on a date has been labeled a "meltdown" is pretty telling. It's unfair to label legitimate emotional responses as hysteria, and it's high time we stopped doing it.

And then, there's the issue of using "crazy" or "psycho" as an insult in the first place. As words flippantly deployed as shorthand for mental illness, they reflect — and perpetuate — the stigma around living with a mental health condition. And that stigma is no small matter. In 2017, the BBC reported NHS Digital statistics that "nearly nine in 10 people who have had mental health problems report they have suffered stigma and discrimination." Casually tossing around words like "crazy" and "psycho" as insults reinforces that stigma and inhibits recovery, and also stops people being comfortable speaking out about their own condition.

It takes so little effort to quietly reflect on your language before you use it — whether that's at work, on Twitter, or on your living room sofa sounding off on the latest Love Island development. But the difference that reflection can have is monumental, so while we exist in a society that continues to belittle women's perceptions and stigmatise mental illness, a plea: just stop calling women "crazy".