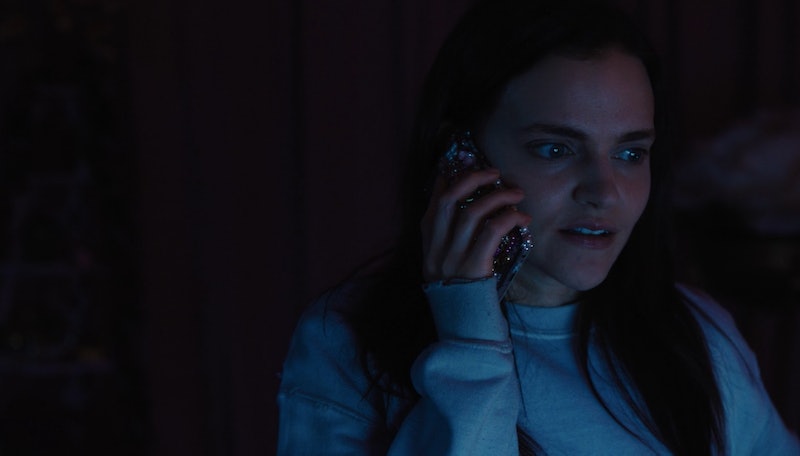 Who are you? It's a philosophical question that's been posed throughout human history, but in a modern era when identity is more malleable than ever and individuals can reach worldwide audiences without leaving their homes, the answer has deeper repercussions. Madeline Brewer stars in CAM, Netflix's new new tech-based psychological thriller. Ahead of the movie's release, she talks about how CAM positively portrays online sex workers and their community, while still pointing out the risks of presenting any kind of identity online.

When Alice finds herself locked out of her cam account, she's horrified to see Lola's still going live. Unable to reclaim her own creation, Alice watches her doppelganger slowly eradicate her boundaries, revealing more and more about Alice's own life. "[Alice] disagrees with doing public shows, she disagrees with telling her guys she loves them. She has these rules set for herself because this is what keeps her from stepping into the land of 'I’m being dishonest to myself and to the people who have come here for entertainment,' says Brewer of her character.

Viewers watch Alice work hard to break into the top 25 most popular cam girls, but she's determined to do so her own way, without resorting to what she sees as cheap tricks. "Getting sucked into the world of porn…or just the whole of the internet, you’ll do something that maybe is out of the lines of your morals, but you’ll earn more likes or more money," the actor explains. "And Alice doesn’t do that."

The film addresses the hypocritical attitude towards sex work online and otherwise, with Alice's friends and family lauding her for supporting herself but shaming her when they find out how she does it. "Porn is still looked up on as dirty, and ‘other’, and it’s just so easy to sh*t all over people who are willing to put themselves out there on the internet, I guess," Brewer says. When Alice tries reaching out to police, their lack of internet understanding and straight-up sexism leads to a phrase often heard by women reaching out for help with online harassment: "just stay offline."

But her account is Alice's workplace, something CAM portrays as exactly that without judgement. It's a job Alice puts hard work into, setting goals and developing creative ideas to engage her audience. "Oftentimes it’s so much more about connecting with the people in your room," says Brewer of cam work. "I mean, look at the way Ariana Grande talks to her fans, you know? There’s a real care and connection and friendship there, and appreciation for them taking time. I feel like Alice does have that with her room."

Brewer says she watched hours of camming to prepare for the role, and got lots of feedback from the film's co-director and writer Isa Mazzei, herself a camgirl for many years. "There was collaboration at every turn in how much nudity there would be, and what I felt comfortable with, and what we felt was appropriate for the character and for a cam girl of this type," the actor explains. She learned a lot, and hopes the audience does as well. "These women are supportive of each other online, and they all get it. They all get it because they all do it and they all understand what might influence another woman to engage in their kind of sex work and to be the cam girl that they are. I think it’s a beautiful community."

But because it's tied to sex work, there's a negative social connotation that prevents Alice from seeking immediate help for a situation that could just as easily apply to any popular online personality, or even an ordinary person. Brewer notes the hypocrisy in a situation where nudity is (ironically) the moral fig leaf, pointing out that you can post pictures of yourself "in like, a loincloth on Instagram and it’ll earn millions of likes, but if you own your body and your sexuality and then use it — use it for power or to earn money, that is frowned upon and criminalized, and people are vilified."

Tension slowly mounts as Alice tries to figure out who, or what, stole her identity. Lola is more popular than Alice ever was, a frightening element because as Brewer notes, "all that happens to Alice is she becomes more performative in her femininity... She becomes hypersexualized. That in my opinion is not an improvement, it just strips the unique and original humanity from Alice and from Lola, and just uses the algorithm... "

CAM doesn't shy away from these negative aspects of life online, and in a deft opener directly touches on the echo chamber cruelty it emboldens. "When you’re behind a computer screen, you lose a little bit of your sense of humanity. You’re desensitized to the other person reading the comments that we make. I think that plays itself out really well in the beginning of the film where these guys who presumably are always in [Lola's] room...suddenly this quote-unquote visitor tells Alice to kill herself. And these guys go along with it! It’s like you forget that this is a person on the other side of this screen," Brewer says. She finds it hard to grasp the disconnect, shocked that "after you’ve just written these disgusting, painful things for another person to read, you click out of your browser...you can go about your day and forget about it, and then another person is left on the other side left to read what you’ve just written. I don’t know. It’s just so bizarre."

At the same time, she fully gets the appeal of having an online identity. "I think that that’s why people like social media, because they don’t have to be fully themselves ... They choose what they show, they choose what part of their life they invite others into...and that’s why it’s also so dangerous, because you get on there, and you look at people’s lives, and you think your life is a piece of sh*t because you’re not doing everything that some blogger is doing and you’re not making all this money from one blog post," she says. "It’s not real life!"

The fear that we're all fragmenting ourselves with myriad online accounts is very real; HowStuffWorks points out the similarities between curating your social presence to symptoms of clinical dissociative identity disorder, and Forbes reports that tailoring facets of ourselves based on social feedback can lead to an overall more fragile sense of self. But despite playing a character whose bifurcated identity causes real-life problems, Brewer likes having a line between public and private.

"It allows me to understand that OK, this is a public profile, what goes on here is what I allow people to see of the Madeline Brewer they see on TV or in movies," she says. "And my other account is for the people that I know and love and who love me... they don’t follow me because they like my performance, they follow me because they’ve known me since the first grade."

She explains that the division is pretty much a requirement for any recognizable media personality. "You have to decide, I think, what you’re willing to give them...and that’s something that you have to learn," she explains. "You don’t owe them anything but the work that you create, and everything else is just, exciting!"

Ultimately there's recognition that though an algorithm can feed people what they already like to pretty great success, it's a stale loop, and can't replicate what a creative individual or genuine connection can offer. Though the internet's been blamed by pop psychology for creating a lonely generation, Brewer notes it's also opened up a world of connection for those who can't find it IRL. "A lot of people have to go to the far reaches of the internet to anonymously create a community where they feel accepted. Because that’s all people want, I think, is acceptance and...just to be able to be invited to the party."

As for CAM's mirroring portrayal of identity and ownership, she just hopes people gain a better understanding of how they present themselves online. "It’s a worthwhile thing to recognize, that … any sort of presence we have on social media is curated, and no matter what, no one’s truly transparent," Brewer says. "I just hope it makes people think about how curated the entire social media thing is, and it’s no one’s true and real life in their every day. I’ve been sitting on my couch hungover and haven’t showered and I post a picture of me like, out in the sun, perfectly coiffed. And it’s just not real."

CAM is truly a horror film for the online generation; there's no need for gore when a film gets so quickly to the root of our personal fears. It's in selected theaters and available on Netflix starting Nov. 16.