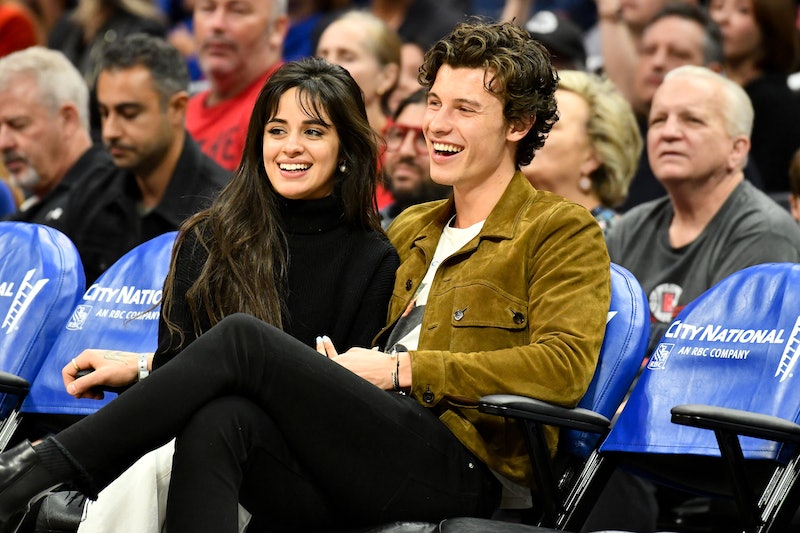 "Señorita" may have earned Shawn Mendes and Camila Cabello a Grammy nomination this year, but it turns out that the sultry duet actually has even greater significance in their lives. During a recent interview with Rolling Stone, Camila Cabello revealed she and Shawn Mendes fell in love while making "Señorita" because the process of writing and recording together rekindled their close relationship. The track, which is nominated for Best Pop Duo/Group Performance at the 2020 Grammy Awards, is the pair's second collaboration, following 2015's "I Know What You Did Last Summer."

According to Cabello, it was while working on that first duet that she and Mendes felt a spark between them, saying, "During 'I Know What You Did Last Summer,' I really bonded with him as more than a friend." While she believes the feeling was mutual, Cabello said it wasn't the right time for them to pursue a relationship because "we were both really young, and he was experiencing the pressures of his career."

"I don’t think we knew what to do with those feelings," she continued. "It was this awkward thing where we both liked each other, but we weren’t together. It was just weird." After that, Cabello and Mendes spent some time apart, in which she reportedly dated Matthew Hussey and he was linked to Hailey Bieber, but once they were back in the studio again, they were able to rekindle their relationship.

"Our paths just didn’t cross in that way romantically until we started hanging out again and writing," Cabello said, adding that "for me, it just brought [the feelings] back."

Though Mendes hasn't been quite as forthcoming about the circumstances that inspired his relationship with Cabello, the singer did tell fans in October that they started dating on the Fourth of July. "Honestly, I wanna say I wanna talk to you guys about this stuff, but it’s not just me in the relationship," he told fans a month earlier about his and Cabello's decision to keep their rekindled romance under the radar, per Elle. "There’s another person involved and I can’t say things that I feel. It’s not just me deciding you know?"

And while the Rolling Stone interview is the first time that Cabello has explicitly mentioned Mendes by name, she did tell Elle in October that "this past year and a half was the first time I really experienced falling in love with another person." Explaining that their love inspired much of her upcoming sophomore album, Romance, Cabello continued, "I think there is so much more depth to love when you know you are in it with another person. You have so much more to say — I think that’s what makes me emotional."

"Love is the most sacred, precious thing to me," she explained. "I want to always feel like my love is between me and that person, and never belonging to anyone else. ... In a relationship, it makes me feel uncomfortable to invite everyone in on that."

If "Señorita" does manages to take home the Grammy for Best Pop Duo/Group Performance in January, it will likely make the song even more "precious" to Mendes and Cabello and their relationship.