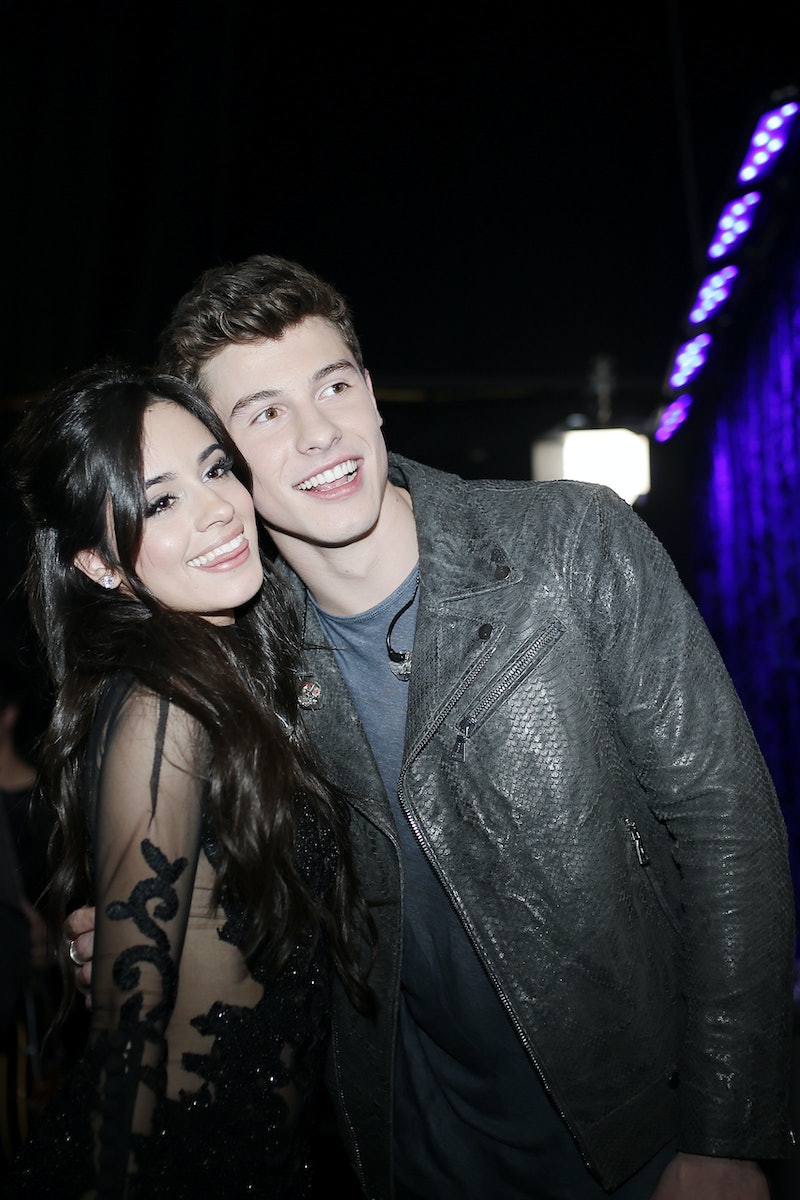 Fans may gain some more insight into Camila Cabello and Shawn Mendes' reported relationship when the former's sophomore solo album drops. In an interview with ITV's Lorraine released on Monday, Oct. 7, Cabello confirmed that there will be songs about Mendes on Romance, but the album is not only about the “There’s Nothing Holdin’ Me Back” singer. The former Fifth Harmony member said that when she was making the second solo album, she drew from her own “life and what has happened the last two years” and alluded to her “first serious relationship" with dating coach Matthew Hussey. The release date for Romance is still to be unveiled, but three singles have been released: “Liar,” “Shameless,” and “Cry for Me.”

While Cabello and Mendes have played coy when asked about their romance in the past, they have recently started to open up. In the aforementioned Lorraine clip, the “Havana” singer shared that she is “so happy” in her relationship, adding that Mendes “feels like home.” When Capital FM host Roman Kemp asked Cabello about Mendes on the Thursday, Oct. 3 episode of Capital Breakfast, she said she “really, really [loves] him a lot." And as Entertainment Tonight reported, when the question of what a Mendes and Cabello date entails came up at Mendes’ pre-concert Q&A session on Saturday, Oct. 5, he revealed that they grab coffee, get food, and watch movies.

Cabello and Mendes struck up a friendship while they were both on tour with Austin Mahone in 2014, and there have been romance rumors ever since. The gossip surrounding the singers potentially being more than just friends reached an all-time high this summer. Again, there have been rumblings about their relationship status for years, but the ball really got rolling when they released their duet "Señorita" (and its piping hot music video) on June, 21, 2019.

The video's release was followed by multiple reported displays of PDA, including TMZ's photographs of Cabello and Mendes kissing in a pool in July. The duo also put on a steamy performance at the 2019 MTV Video Music Awards in August, that ended with a near kiss. Several days after the VMAs, outlets including BuzzFeed reported that Mendes told fans at a concert Q&A that he could not say whether or not he is in love because "there’s another person involved."

When the pair performed "Señorita" in Toronto on Sept. 6, Mendes planted a kiss on Cabello's cheek at the end of the song. About a week later, Cabello and Mendes addressed the comment that they "kiss like a fish" by posting a video on Instagram in which they opened their mouths and mashed their faces together. When a paparazzo asked Mendes if his situation with Cabello was only going on to drum up attention, the "Stitches" singer replied in a video shared by TMZ on Sept. 19 that it is "definitely not a publicity stunt."

When Cabello's forthcoming album comes out, it will be nearly impossible to resist the urge to comb through every lyric for any possible allusions to Mendes.

More like this
Meghan Trainor & Daryl Sabara Are Expecting Their Second Baby
By Jake Viswanath
Adam Levine & Behati Prinsloo Welcome Their Third Child Together
By Jake Viswanath
Hilary Duff's Husband Matthew Koma Has Her Name Tattooed On His Butt
By Jake Viswanath and Stephanie Downs
Linda Ronstadt’s “Long Long Time” Plays A Pivotal Role In The Last Of Us
By Brad Witter
Get Even More From Bustle — Sign Up For The Newsletter
From hair trends to relationship advice, our daily newsletter has everything you need to sound like a person who’s on TikTok, even if you aren’t.