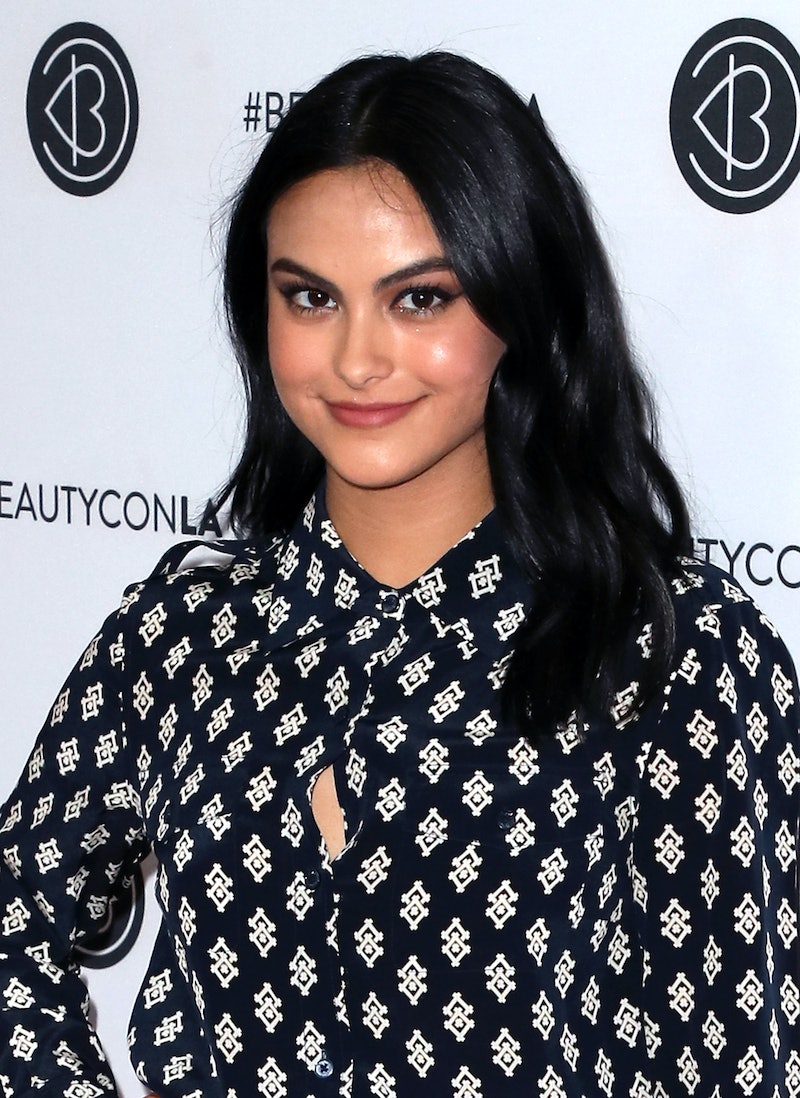 There are a lot of good things in this world, but few things trump the sheer enjoyment that comes from watching a clumsy, little puppy bounce around a room. Camila Mendes' family got a new puppy, according to some recent videos the Riverdale star posted to her Instagram Stories. And holy cow — it is so stinkin' cute. So cute, in fact, that you are basically guaranteed to audibly "aww" multiple times at a very high-pitched level once you see it.

The adorable puppy in question goes by the name of Zix, Mendes revealed in the clips, and he's a German Shepard/Coonhound mix. It's unclear what "Zix" means or stands for, exactly, but who cares? He's cute as hell. Puppy names don't need to be explained.

In the first video Mendes posted on Aug. 7, Zix appears to be chewing on some kind of treat. He's so focused on that thing that, at one point, the tiny guy accidentally log-rolls over Mendes' leg — and it. Is. So. Cute. A tumbling, bumbling puppy, you guys. It's almost too much to bear.

After momentarily dropping his treat, he picks it back up and soldiers on, much to the enjoyment of Mendes and well, the entire world basically. "Meet Zix, the new family pup," the actor captioned the clip, along with a heart emoji. She should have added like, a thousand heart emoji, though. That woman has restraint.

In the second clip, Mendes repeatedly beckons little Zix in the aforementioned high-pitch tone, because that's what you do when in the presence of a precious puppy. Zix — who was, until that moment, chilling under a bar stool — immediately goes bounding toward Mendes, jumps up on her leg, and then turns and darts away. It. Is. So. Cute. He clearly has places to go, people to see, and things to smell. So much new.

The final installment of Zix's Instagram debut is a photo of the pup chilling under a bar stool again — which is clearly his favorite spot at the moment — but this time he's got a tennis ball wedged between his two tiny front legs. As if that weren't adorable enough, he's looking straight into the camera with what can only be described as "puppy dog eyes." Literally. We have reached peak precious.

It's an exciting time for the 24-year-old actor, and not just because of Zix. On July 14, Mendes confirmed her relationship with Victor Houston, according to E! News, after several weeks of speculation. "I can confirm, sure, I don't care. Sorry, guys," she told the network during an interview.

Apparently, Mendes and Houston went to neighboring high schools in their home state of Florida, E! News reported, though it's unclear when and how the couple reunited after all these years. So, who is Houston, you wonder? Just a nice, normal guy, it seems, and that's perfectly fine by Mendes.

In an interview with Nylon in July, the actor admitted that "dating people in the [entertainment] industry is tough" and she "did [that] for a little bit." She told the publication,

New boyfriend, new puppy, what's next? Well, a new season of Riverdale, for starters. Season 3 just recently started filming, Teen Vogue reported, but that clearly hasn't stopped Mendes from making time to enjoy the other new and exciting things in her life. And hopefully she'll give the public what they really want sometime soon: more pics of Zix.