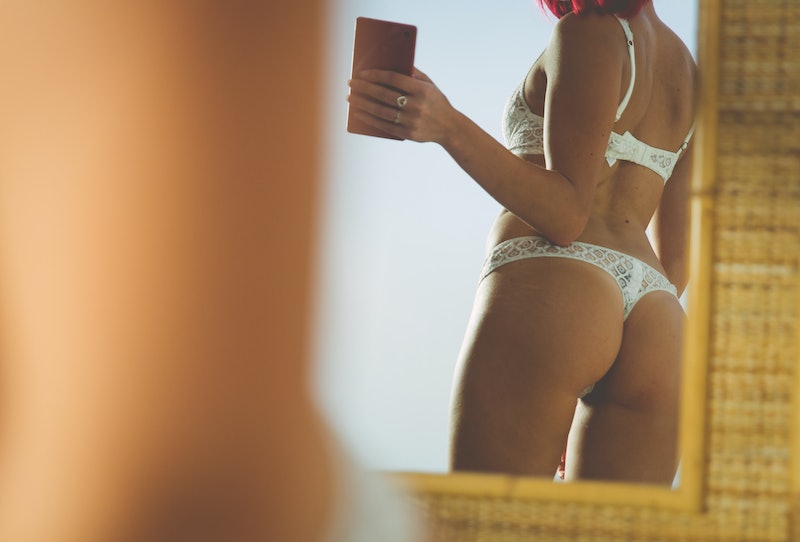 When aspiring stand-up comedian Daphne, 24, lost her service industry job mid-March as a result of the coronavirus crisis, an ex-boyfriend urged her to make an OnlyFans account.

“I’ve always been interested in sex work and taking nudes, so I thought, ‘Why not?’” Daphne tells Bustle.

Searches for OnlyFans, a subscription-based social media platform that’s often used by cammers, spiked on Google in the past month, the same period in which more than 6 million people filed unemployment claims related to COVID-19. Reporting from The New York Times shows that sign-ups on CamSoda and ManyVids, platforms for users to host adult videos, were up 37% and 69% in March, respectively, over the same period last year.

This surge might be attributable in part to sex workers who previously saw clients in-person pivoting their services to digital, thanks to social-distancing policies (or people suddenly at home with lots of time on their hands and itches to scratch). But veteran cammers have also seen a uptick in recently laid-off civilians — non-sex workers — asking their advice on how to cash in on sex work.

“I’m encouraging people who are not already in the sex trade to please get government help through unemployment instead,” Fera, 31, tells Bustle. ”We [in the sex work industry] don’t have access to those forms of help because we don’t have a legal income stream.” Even some legal sex workers who apply for grants through the Small Business Administration may be denied relief, though advocates have pointed out that there are other forms of aid available for individuals.

Fera is concerned that the flood of new people entering the market will make their labor worth less. “I did a full two hours [of camming] the other day and made 30 cents,” the 15-year industry veteran tells Bustle. “Because this work is so devalued, the way clients reach out is also devalued.” Even though Fera is focused on virtual work for the time being, one client reached out recently asking for no-condom services for a third of their usual rate. These types of in-person inquiries are pretty much the only kind they’ve gotten over the past two weeks. “All my screening processes are out the window,” Fera says. “What [I’m] making now is just day-to-day-survival money. It isn’t pay-the-rent money.” Fera does consultations on the ins and outs of virtual sex work and donates the fees to a local crisis fund.

Fera, who lives with multiple chronic illnesses, is “very high risk” for COVID-19, so they turned to doing virtual sex work quickly. “I got a lot [of clients] to see me over Skype or over the phone or text, but for a fraction of my usual rate,” they say. “But it was enough to get the medicine I need, to get groceries.” Still, they question whether working online will even be feasible a week from now. “I will probably need to turn back to doing in-person work even though there are not a lot of clients willing to do that right now.”

Daphne is mainly living off of unemployment checks from her former restaurant job and the church where she had a part-time role, but she’s made around $80 from her OnlyFans account — “a couple of trips to the grocery store.” She says that while sex work makes her feel empowered to use her sexuality to benefit herself and her family, it’s not something she can sustain long term. “It’s absolutely not as easy as it seems, and those that are having great success on OnlyFans are rock stars,” Daphne says.

The idea that her entering this industry could take business away from veteran sex workers, she says, never crossed her mind. Rather, she sees her entry into camming as a way to try something she was always curious about, but never had the opportunity to do before. She says the work feels creative and fulfilling.

Fera says they feel bad about discouraging others from getting into virtual sex work, but doing so feels necessary. “It’s a lot of work and effort to be a sex worker, even before the pandemic hit, and to make a viable and stable income from this being your only form of labor.”

Nadia’s biggest concern is ensuring that civilians like Daphne don’t make dangerous mistakes. “I don’t know everyone’s reasons for wanting to get into sex work right now,” she says. “We’re all colleagues here. … I just want everyone to be safe.”

More like this
What Is Megan Thee Stallion’s Net Worth? The Traumazine Hitmaker Isn’t Worried About A Budget
By Hugh McIntyre
Gemma Collins' Net Worth Is Only Going Up
By Catharina Cheung
What Is Brad Pitt’s Net Worth? The Bullet Train Star Now Makes 8 Figures Per Film
By Hugh McIntyre
Hinge's New NFAQ Feature Is Demystifying Queer Dating
By Emma Carey
Get Even More From Bustle — Sign Up For The Newsletter