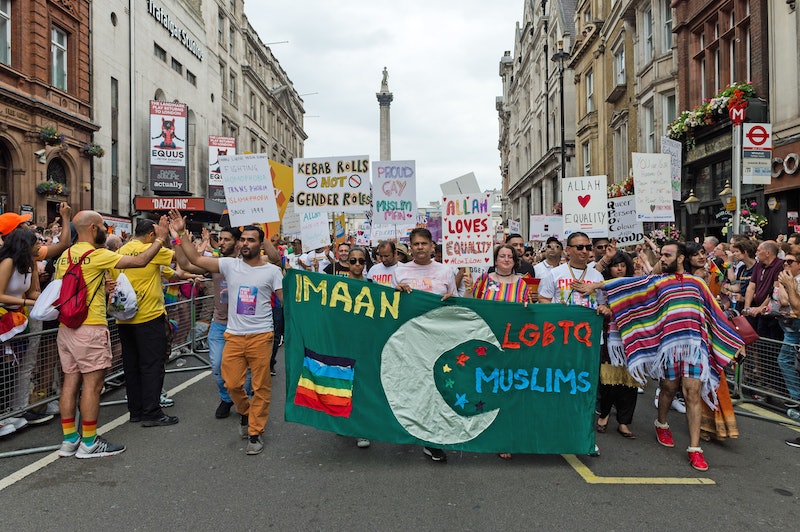 All during summer 2019, Gay Pride, Trans Pride, Black Pride, and Bi Pride events were taking place up and down the country. Each parade celebrated amazing campaigners, activists, and regular people living their everyday life as out and proud. Separating the events helps to recognise that the lived experiences of people within the LGBTQ community aren't all the same, and now activists are calling for a new festival to be added to the Pride calendar. A campaign group is raising money to set up a UK festival to celebrate LGBTQ Muslim culture as a way to celebrate and educate people about the unique experiences of this community.

In a report by BBC Radio 1 Newsbeat, Joy Muhammad, a member of the campaign group Imaan, explained that Muslims who identify as LGBTQ are often told to pick between their religion and their sexuality, and the stigma and discrimination they face doesn’t just come from straight people but from within the LGBTQ community also.

“We've had Bi Pride, we've had Black Pride, we have Trans Pride. So now we've got Muslim LGBTQI Pride. It'll celebrate the diversity within the BAME community and the LGBT community to show we're not all the same, we don't have just one identity.”

Muhammed and other members of the Imaan group have taken part in the London Pride parade, but, as Muhammed explained to Newsbeat, they’ve experienced stigma at Pride events. "There's Islamophobia that we sometimes have to deal with within Pride and within LGBTQI communities," she said. "Not just at Pride, but within the queer community."

On their fundraising page, Imaan explain: "We as LGBTQI Muslims often find ourselves isolated, without community and frequently facing homophobic, biphobic, transphobic AND Islamaphobic abuse. We are proud that over the last twenty years, [Imaan has] managed to build a huge community and network across the UK and the world that supports and celebrates Muslim LGBTQI diversity on almost no budget."

They continue by explaining their wishes for this new event:

"Now we want to turn to our wider friends and communities to raise funds to cover some of the costs of a unique festival that will celebrate LGBTQI Muslims on the occasion of Imaan's 20th anniversary. The event will build on the incredible events we organised in the past and feature panels, discussions, speakers, arts, culture and history — a first for LGBTQI Muslims."

As of writing, the fundraising page has raised £5,340. This exceeds their initial aim of £5,000, so they have now raised the target to £10,000. Explaining the reasoning behind their new figure, they write: "With the extra funding, we can produce a bigger, bolder, more exciting event AND subsidise a number of places for those who cannot afford to attend. Anything left over will go into running costs of our monthly support groups."

You can donate to Imaan's fundraising efforts here.