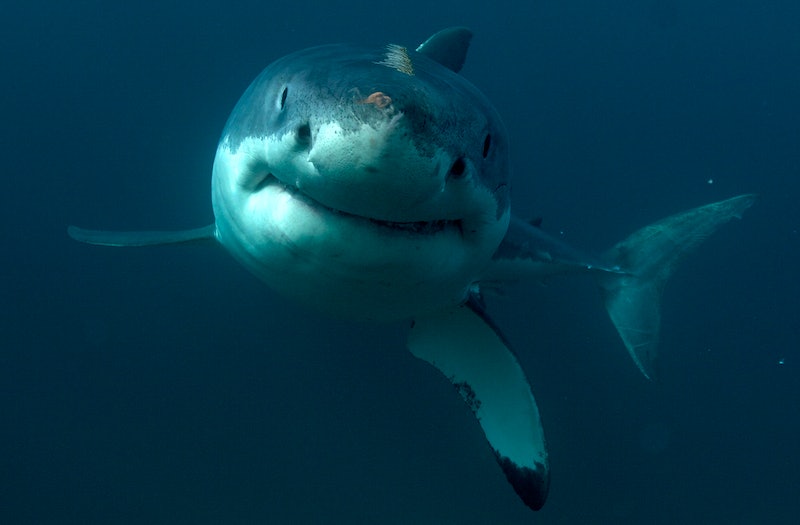 If anyone has earned the right to share the water with a shark, it's Michael Phelps. And his race against a great white is the buzziest event of Discovery Channel's 2017 Shark Week. But even with Phelps being one of the greatest swimmers of all-time, can a human swim faster than a shark? The Olympic champion is retired from swimming, but if anyone could beat a shark, it would have to be him, right? Phelps will be racing a great white for Shark Week, but science has proven over the years that no human really has a chance of beating the deadly species. And since a great white doesn't care how many Olympic medals he has, it seems that Phelps' chances won't be much greater than the average human's when it comes to this race.

The number that is frequently cited when talking about Phelps' fastest swimming speed is six mph. This number comes from a 2010 ESPN blog post on the subject of athlete speed. The ESPN post cites a 2008 blog post from the National Aquarium on whether or not Phelps could beat a dolphin. The National Aquarium post says top-swimming athletes can average 5.25 mph, with the authors rounding up to six mph for Phelps. Meaning, this six mph number is not necessarily definitive and it's no wonder Phelps asks in the Shark Week preview, "Am I faster than a shark?"

The website Neatorama showed its math when it analyzed if Phelps swims faster than a goldfish in 2008. The author used one of Phelps' 100 m butterfly time — 50.77 seconds — to find that he swam 4.4 mph. But after Neatorama's article was published, Phelps set the still-standing world record for the 100 m butterfly of 49.82 seconds in 2009. When converted from 2.007 meters per second to miles per hour, his world record for the 100 m butterfly puts him closer to 4.5 mph. Or, to increase his speed even more, Phelps swam his leg of the 4x100-meter freestyle relay at the 2008 Beijing Olympics in 47.51 seconds, which ups his speed to 4.7 mph.

No matter if Phelps is capable of swimming 4.7 mph or 6 mph, he's still obviously a faster swimmer than the average human. Livestrong wrote that Dutch researchers Huub Toussaint and Martin Truijens reported in 2005 that the average sprinting speed for swimmers is 3.7 mph. But for an average swimmer not sprinting, the Houston Chronicle reported that the Channel Swimming Association says the speed is more like 2 mph, which Phelps can blow right out of the water.

Yet, whether you're a pretty basic swimmer or Michael Phelps, your chances against a shark aren't promising at all. According to the World Wildlife Fund, there are more than 400 species of sharks in the ocean, but for the purposes of understanding Phelps' Shark Week stunt, this article will focus only on the shark he is racing — the great white. In a fact-checking segment on news station KHOU-TV Channel 11 in Texas, they investigated if a human can swim faster than a great white shark and came up with a pretty definitive no. They used the 6 mph number for Phelps' swim time and their research showed that the Canadian-based ReefQuest Centre for Shark Research stated that a great white shark can swim up to 25 mph.

The text on ReefQuest's website about the speed of sharks, which was written by director R. Aidan Martin before he died in 2007, is actually pretty prolific on the subject of the most decorated Olympian of all-time racing a great white. Here's what Martin wrote:

"Current consensus among shark scientists is that the top swimming speed of the Great White is at least 25 miles (40 kilometres) per hour. My own rough, back-of-the-envelope-type calculations — using several methods — suggest that the White Shark may achieve burst speeds of 35 miles (56 kilometres) per hour or more. That may not seem very speedy, but it's seven times faster than the finest Olympic swimmer and probably at least ten times faster than you or I could manage."

Martin's estimate that great whites may be able to exceed speeds of 25 mph has been corroborated by the Ocean Portal, which is a part of the Smithsonian Institution's Ocean Initiative. "The torpedo shape of the great white is built for speed: up to 35 miles per hour (50 kilometers per hour)," the Ocean Portal Speed team wrote.

This idea that great white sharks are "built for speed" is perhaps the biggest reason why a human will never be able to swim faster than them unaided. As marine biologist (and my husband) Brendan Newell tells Bustle, "Great white sharks (Carcharodon carcharias) are finely tuned by evolution to swim fast and chase big, fast, and agile prey, like seals. People are not." He adds, "The only way a human would beat a great white is if the shark wasn't interested."

So how could Phelps ever beat all of that evolution? Well, even before it was announced that Phelps would race a shark, The Verge reported that futurists were being asked at SXSW if they believed it would ever be possible for humans to swim as fast as sharks with the help of technology. The SXSW question didn't go very far, but Phelps will be using technology to help him in his race. TIME reported that he will be wearing a monofin and a specially designed wetsuit for his race.

In that same TIME article, Phelps openly discussed the disadvantage he'd be at by racing a shark. (He also cited that his swim time is more in the 5.5 mph range). He said:

You can see exactly what those changes are when Phelps' race against the great white shark airs on July 23. And while it seems fairly impossible that the Olympic athlete will win, you can still marvel at the amazingness that is nature in both shark and human forms during this epic event.