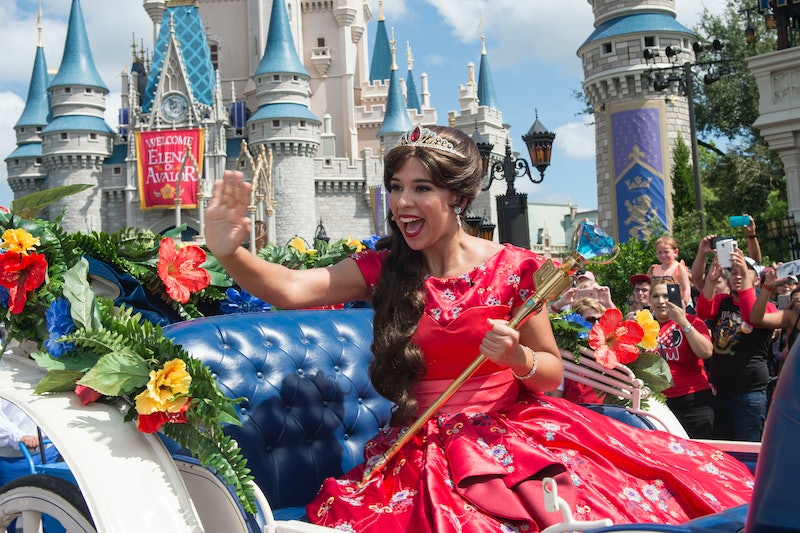 If you’re heading to one Disney parks anytime soon, you might be pondering a very important question as you pack: Can adults wear costumes at the Disney parks? Well, there’s good news bad news: The bad news is that people age 14 and older who visit any of the Disney parks are not permitted to wear costumes while they’re on park grounds. The good news, though, is that there are still plenty of ways to express your love for your favorite characters without wearing a full-on costume.

According to Disney’s official websites, the Anaheim and Orlando parks actually have a fairly extensive dress code for visitors who are 14 or older — although most of it is pretty common sense: Keep it family-friendly and comfortable, and you’ll probably be fine. If you want details beyond that, though, it’s easier to list what’s not allowed than what is: No-gos include clothing with “objectionable material,” which covers both “obscene” language and graphics; “excessively torn” or very loose-fitting clothing (if it drags on the ground, it could become a trip hazard); and clothing which “exposes excessive portions of the skin that may be viewed as inappropriate for a family environment.” Additionally, if you wear tons of layers, you might be subject to search when you enter the park; visible tattoos that might be deemed “objectionable” will need to be covered up; and you’ve gotta wear shoes. Sorry, bare feet fans.

And, of course, adults can’t wear costumes or masks.

The general reasoning for grown-ups not being permitted to wear costumes in the parks is as much about maintaining the magic of the park-going experience — especially for kids — as it is about safety. For many people, adults and kids alike, official character meet-and-greets and encounters with walk-around characters are one of the highlights of visiting a Disney park; the incredible performances given by the actors Disney hires to play these characters along with the highly detailed costumes, makeup, and hair and wigs they wear while performing really bring the Disney universe to life. Park visitors arriving wearing similarly detailed attire can therefore create a few problems: First, it might detract from the official meet-and-greets and walk-around character encounters; and second, it might be really, really confusing for small children. Little kids may not be able to distinguish between actual Disney character actors and regular people in costumes, which can be troublesome for adults and has the potential to be upsetting for the kids themselves.

It’s also key that guests not be “mistaken for employees” for safety reasons, as Travel + Leisure observes. If you were ever to need any help while you’re in the parks, knowing who actually works there versus who are visitors just there to have a good time is essential. Granted, if you need help, you’d probably head for a non-character cast member first — but still. The visual cues provided by the detailed costumes worn by actual Disney cast members matter in many safety-related situations.

Why does the rule kick in at 14 specifically? The age might be a little arbitrary, but for what it’s worth, 14 seems to be the age at which the Disney parks consider you an adult. Per official Disney policy, any guests under the age of 14 must be accompanied by a guest age 14 or older; however, once you turn 14, you can run around the parks on your own with your friends as much as you like (as long as you abide by all the other rules and policies, of course). I don’t think it’s a coincidence that the “no costumes” rule also comes into effect once you turn 14, too.

There are a few times when adults are allowed to wear costumes in the Disney parks, though — namely, special events like the Oogie Boogie Bash at Disneyland and Mickey’s Not-So-Scary Halloween Party at Disney World. The same general rules about everyday wear still apply — your costumes haven’t to be family-friendly and “may not be obstructive, offensive, objectionable, or violent”; it can’t incorporate “sharp objects, pointed objects, or materials that may accidentally strike another guest”; your costume can’t be so long that it drags on the ground; and you can’t bring anything that might be “mistaken for an actual weapon.”

But at these events, capes are OK if they’re waist-length or shorter; you can definitely wear “themed T-shirts, blouses, sweatshirts, and hats”; “headwear” — think hats, headbands, mouse ears, and so on — is fine “as long as it does not cover the face”; and you’re welcome to add a few strategic accessories, like wings, plastic light sabers, or tutus, to your look. Costume masks are a no-no for visitors 14 and over at both the U.S. resorts, although at Disneyland, masks worn for medical purposes are OK. Note, though, that even if your costume meets all these guidelines, costumed guests aren’t allowed to pose for pictures with or sign autographs for other guests.

But even though folks age 14 and older can’t wear straight-up costumes during regular, non-event visits, there are still plenty of ways to dress like your favorite characters that are permitted within the parks. In recent years, for example, DisneyBounding — dressing in color palettes that mimic the look of your favorite Disney characters without being full costumes — has become increasingly popular. The term itself comes from style blogger Leslie Kay, whose website, DisneyBound, was one of the first — and remains one of the most notable — Disney-themed style blogs devoted to designing outfits from easily-acquirable, everyday clothing items that capture the spirit of a huge variety of fictional characters. Additionally, Disney now has their own line of dresses, the Disney Dress Shop, that combines character- and park-inspired themes with vintage-style cuts for a unique take on the idea of dressing for Disney. And, hey, there’s always a good ol’ themed T-shirt. This one apes the look of a Ghost Host uniform while still clearly being, y’know, a T-shirt — that is, there’s no danger of being mistaken for an actual Haunted Mansion host.

No matter how you dress, take your cues from Disney’s dress-for-the-park policy: Keep “safety and good judgment” in mind, but also let your creativity guide you. Have fun!

More like this
22 Movies On Netflix That Are Perfect For The Whole Family
By Bustle Editors
Expert-Approved Hacks For Packing A Carry On
By Jessica Goodman
Where Was 'The Bachelorette' Season 19 Filmed? More European Destinations Are On The Way
By Radhika Menon
I Tried Float Therapy In Iceland's Blue Lagoon — Here's My Honest Review
By Alexandra Owens
Get Even More From Bustle — Sign Up For The Newsletter