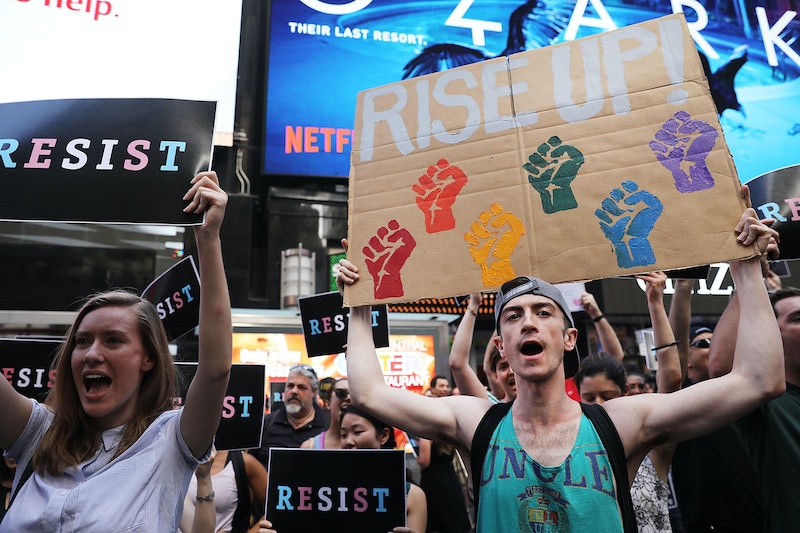 Last month, the U.S. Supreme Court ruled that Trump's transgender troop ban can go into effect while lower courts continue to hear arguments on the ban's legality. Following this order, you might be wondering whether Congress can stop Trump's transgender military ban. As it turns out, bills reversing the ban have already been introduced in Congress, but getting them signed into law will likely be an uphill battle.

As the Washington Post reported on Feb. 7, several members of Congress introduced bipartisan legislation that, if passed, would ban the Defense Department from denying transgender individuals the ability to enlist or continue serving in the military. The outlet noted that, on the Senate side, Democratic Senators Kirsten Gillibrand and Jack Reed and Republican Senator Susan Collins sponsored the legislation. NBC added that, in the House, Democratic Representatives Jackie Speier, Joseph Kennedy, Susan Davis, and Anthony Brown, along with Republican Representative John Katko, introduced the bill.

The Military Times noted that the House version of the bill overturning Trump's transgender troop ban looks like it has a relatively strong chance of passing, due to the chamber's Democratic majority. Indeed, the outlet reported that Representative Speier, who chairs the House Armed Services Committee's personnel panel, indicated that she plans to hold a hearing on the ban in late February.

However, The Military Times pointed out that the Senate version of the bill will probably face more opposition from the Republican majority in that chamber. Rewire.News similarly reported that Senate Majority Leader Mitch McConnell isn't likely to permit a floor vote on the Senate version of the bill on its own. However, Mara Keisling, the executive director of the National Center for Transgender Equality, told the outlet that the bill's sponsors could potentially get around this issue by attaching the legislation to the National Defense Authorization Act (NDAA) as an amendment, ensuring that it would have to be introduced and voted upon.

Notably, as The Military Times reported, even if legislation reversing Trump's transgender troop ban passed the House and Senate, the president would still have to sign it. Trump signing off on the legislation seems unlikely, given that he authorized the ban in the first place. If (hypothetically) Trump vetoed this legislation, then the only way it could still become law is through a congressional veto override, which requires a two-thirds vote in both chambers. Overriding a veto would be a challenging task, as the United States Senate indicates on its website that, historically, Congress has only overridden less than ten percent of presidential vetoes.

Rewire.news suggested that Congress could possibly avoid having to override a veto by using the aforementioned strategy of attaching the overturn of Trump's transgender troop ban to the NDAA, which funds the military. As Keisling described, if Congress used this amendment strategy, "the president would be forced to either sign it [the legislation] or shut down the military." However, constitutional litigator Gregory Lipper also told Rewire.News that the president could alternatively still sign the NDAA, but then issue a signing statement saying he won't follow the amendment. This would mean that the transgender troop issue would then go back to the courts.

Overall, passing legislation to ensure that transgender individuals can enlist and serve in the military seems like the most viable way for Congress to stop Trump's transgender military ban. However, there are clearly multiple hurdles to implementing this strategy. As the transgender troop ban continues to make its way through the court system, it remains to be seen how far Congress' legislation on the issue will advance in the meantime.