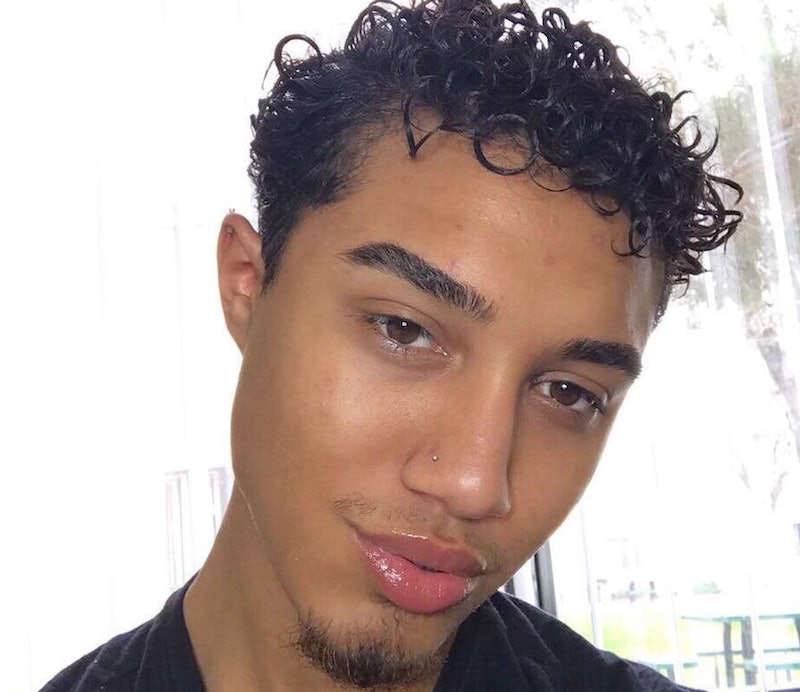 From pimples to poreless, it has been quite the skin care journey for Antonio Bermudez. The acne-prone, Las Vegas-based makeup artist cites a drugstore product as his skin savior— and his social media "before and after" images are going totally viral.

Antonio Bermudez documented his skin's transformation on Instagram. The Internet is fully amazed at the end result of an expertly executed program of product and skill. His assortment of hero products is also available at your local drugstore, too.

According to Allure, Bermudez has been struggling with acne for years. His skin was so inflamed at one point that he would wake up bleeding from the condition. Bermudez's skin situation delivered a serious blow to his confidence. He told the publication that he turned to makeup to boost his self-esteem. But it wasn't enough. So he kept seeking the right fix.

"With acne, the application isn't smooth," he said, spotlighting a problem that so many people with acne deal with when it comes to foundation and other facial products. Bumps, scabs, and scars are often amplified rather than hidden by foundation, concealer, or blush.

Ultimately, Bermudez crafted a skin care regimen that allowed him to identify and correct the issues plaguing his combination skin. He had to find the right balance of treatment and he did so in drugstore aisles.

"My experience was educational," Bermudez tells Bustle. "Finding a solution has expanded my knowledge on skin care."

While he upped his acne acumen, there was an even better byproduct of this journey. "It has helped my confidence, whether I have acne or not or just flaws in general," Bermudez tells Bustle.

When creating his skin care routine, Bermudez realized he needed to suit his super specific needs in order to stop the vicious cycle of breakouts. He had to address the facial areas that required additional TLC and hydration. "If I'm not moisturized, I will overproduce oil, and it'll create acne and bigger pores," he told Allure.

He revealed that he washes with Cetaphil bar soap and moisturizes with La Roche-Posay Lipikar Balm AP+. To even skin tone and help with any scarring that is a result of his acne, he exfoliates properly with Dermalogica Daily Microfoliant or the ever-popular St. Ives Apricot Scrub. He refreshes with Vichy Thermal Spa Water, which acts as a healer. All products are easily accessible!

Bermudez finishes things off with No7 Early Defence Glow Activating Serum. This brightening product is widely available and adds radiance and a natural glow. It's the MVP of his regimen.

Bermudez also told Allure that he opts for a foundation with coverage to create a smooth canvas. He custom blends his own formula by pairing Milani's 2-in-1 Foundation + Concealer with Make Up For Ever's Ultra HD Stick Foundation.

These products work in concert. The Milani foundation evens out his skin tone, covers any blemishes, and matches his skin tone, while the MUFE stick highlights and contours.

Make Up For Ever ULTRA HD Stick Foundation, $43, Sephora

The products blend smoothly and don't catch or pull at any residual scabs or dry patches. It's an unbeatable combo of a mass market and prestige product.

The assortment of drugstore products that Bermudez uses is working for him. The before and after is simply amazing.

The before-and-after images have been generating quite a bit of chatter on the Internet — so much so that users were criticizing Bermudez for wearing foundations in his pics. But he is a makeup artist — that's what he does. Still, he responded by posting a makeup-free shot of his actual, healed skin.

Social media is supporting Bermudez as he shared his skin care sojourn. He had made makeup work for him.

Perhaps his story and product suggestions will help others battling the same skin issues. Therein lies the power of social media.