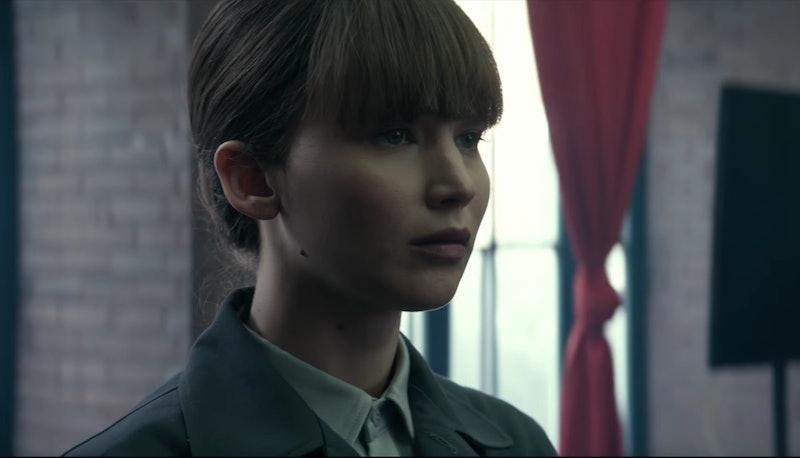 The new Jennifer Lawrence movie, Red Sparrow, provides a thrilling look into the life of a specialized Russian spy known as a sparrow. Her character, Dominika Egorova, doesn't start off as one of the seductive spies, though. Instead, Dominkia begins as a ballerina. And since Jennifer Lawrence can't really dance like she does in Red Sparrow, the actor did training to play the part. This breaks the molds for many actors who rely on stunt doubles for such specialized activities rather than doing the moves themselves.

While talking with E! News, though, Lawrence revealed that she probably won't continue practicing her pirouettes. "It was really brutal. I have so much respect for those athletes slash artists. It's amazing what they do, but as soon as I wrapped the ballet scene, I threw my shoes in the trash. Done," the actor said. Even if she doesn't plan to quit acting to pursue ballet, Lawrence does a great job of fooling the audiences in the six minute opening scene for Red Sparrow. In the scene, Lawrence dances in a duet to an original song by James Newton Howard, according to the New York Times.

In order to prepare for the lengthy routine, Lawrence trained for three months ahead of filming. According to Elle, the actor trained for three hours a day with Kurt Froman, the same ballet dancer who trained Natalie Portman and Mila Kunis for Black Swan.

The New York Times reports that in the film, Dominika's upper body is really Lawrence doing the moves, but a dance-double, Isabella Boylston filled in to perform the technical footwork when needed. Still, Lawrence did do all the moves, and you can bet that she did them correctly even when Boylston was shown. That's because her coach, Froman, wanted to make sure that all the ballerinas watching could watch the movie without rolling their eyes at the botched choreography.

In an interview with the Times, Froman explained, “In the past when you saw dance misrepresented, you’d get this kind of cringe, because you’d feel like, God, if only someone had suggested something a little more legitimate they could have pulled this off.” That's where Froman comes in. After dancing with the New York City Ballet, he went on to choreograph and train dancers, some in Hollywood. "I love feeling like an ambassador to my art form," he told the New York Times.

Even though you've probably seen Lawrence dance before in Silver Linings Playbook, you definitely haven't seen her do any of the moves from Red Sparrow.

In addition to working with Froman, Lawrence also trained with Russian ballet coach Olga Kostritzky, who also appeared in Black Swan. For Lawrence, getting a taste of a the real life of a ballerina was important in informing her role even after the character stops dancing to become a spy. While describing how she started a diet for the role, Lawrence told Vanity Fair, "Red Sparrow was the first time that I was really hungry, and disciplined. I can’t be in character as an ex-ballerina and not feel like an ex-ballerina.” She later added, however, that once she stopped training, she quit her strict diet. "I can’t work on a diet," Lawrence said.

Even though Red Sparrow starts off as a story of a dedicated and accomplished dancer, it obviously takes some dark twists when it gets into the spy world. Due to Lawrence's training, though, the six-minute ballet scene at the beginning of the film is not only the one part of the movie that you can watch without holding your breath or covering your eyes — it's also a memorable, exciting scene that shows what the actor is truly capable of doing.