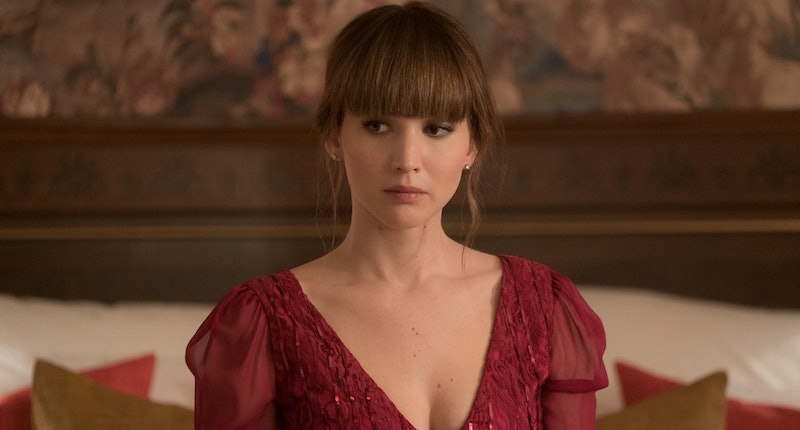 Jennifer Lawrence has come a long way since her days shooting a bow and arrow as Katniss Everdeen. The 27-year-old Oscar winner has increasingly been taking on roles that take her career in daring directions. Her last film was mother!, a stylized pseudo horror allegory film that fans will argue about until the end of time, and her next film is Red Sparrow, a spy thriller that again puts the actress in some frightening situations on screen. But how scary is Red Sparrow, really?

The film is not meant to be a horror movie in any way, so it's certainly not going to frighten you in the way that a traditional scary movie would. However, that doesn't mean the film is entirely without terrifying scenes. As a spy thriller, and a high tension one at that, the movie still finds ways to make the audience feel a sense of dread. The basic plot follows Lawrence's character, a Russian ballerina named Dominika Egorova who's forced to become a sparrow for the Russian Foreign Intelligence Service. Sparrows are a type of spy who specialize in seduction, and the scenes of Egorova's intense training include some disturbing sexual and emotional abuse that could definitely leave viewers feeling unsettled.

The film is rated R, and it features some very violent sequences, scenes of torture, and very uncomfortable sexuality and nudity. If all of that sounds like it may frighten you, then you may find Red Sparrow a little scary. One person who found it a bit scary was Lawrence herself; at least when it came to filming a big nude scene. "It was really scary to say yes to the movie because I knew the only way to tell the story is if I agreed to really do the scenes and go full Monty," Lawrence told Today Australia. "It took a while to say yes, and the night before I didn’t sleep at all and I was obviously really nervous because it is the actual nightmare of standing in front of a classroom naked. But then after I finished the scene, I felt empowered." Given that Lawrence had been dreading filming the nude scene, it seems likely that her anguish will translate to the audience.

Another scene in the film frightened someone on set who is particularly close to Lawrence: Her dog Pippy. According to the actor, a scary knife fight scene wherein she feigned an injury was so lifelike that it caused her tiny pup to rush on stage to her defense. "We were doing a knife fight in the kitchen and I went 'agh' and fell down to the ground and little seven-pound Pippy [barked] and ran on set," Lawrence told Entertainment Tonight. "She was gonna sacrifice her life for her mom."

But in spite of the film's violent scenes, Lawerence's own fears about performing a nude scene, and her dog's failure to understand what a movie is, most people will not consider Red Sparrow to be a scary movie. It's a semi-erotic spy thriller, so if you were able to handle violent, sexually-charged thrillers like Basic Instinct, and had no trouble with the gritty and painful torture scene in the James Bond film Casino Royale, you likely won't have any trouble sleeping after sitting through Red Sparrow.

On the other hand, if you are someone who is very sensitive to scenes of torture, specifically those of a forced sexual nature, then you may find Red Sparrow to be a more difficult watch than your average spy movie. And while it's certainly no The Exorcist, the movie could still potentially scare viewers who are expecting a generic old school spy mystery.

More like this
'Dirty Dancing's Jennifer Grey On The Tearful Moment That Changed Her Relationship With Patrick Swayze
By Sam Ramsden
'Dirty Dancing's Jennifer Grey Wants Harry Styles To Be The Sequel’s Love Interest
By Grace Wehniainen
What Does Doctor Strange’s Third Eye Mean?
By Arya Roshanian
What’s New On Netflix: A Victoria Justice Rom-Com & The Return Of David Letterman
By Arya Roshanian
Get Even More From Bustle — Sign Up For The Newsletter