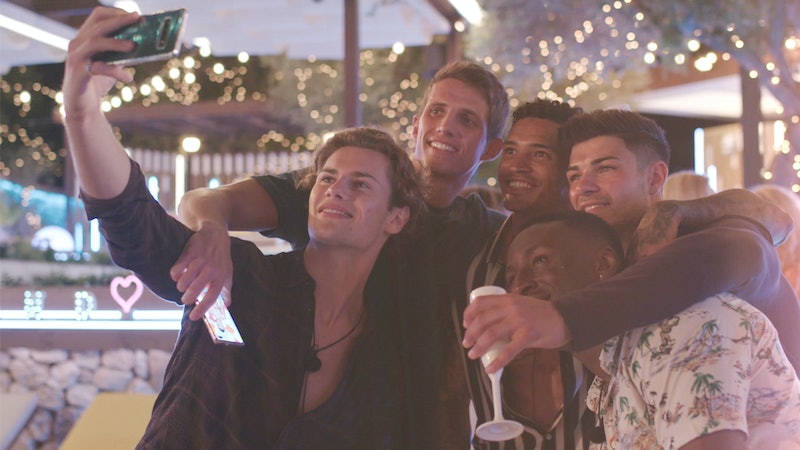 I imagine it'll feel quite alien to contestants if social media is prohibited. Can you remember the last time you went several weeks without checking your socials? Exactly.

When it comes to connecting with the outside world from inside the villa, the rules are pretty strict. In fact, the contestants won't just be disconnected when plonked inside the villa, they'll be cut off almost immediately once the Love Island process begins. In fact, former contestant Malin Andersson told iNews just recently that the ITV2 team take the islander's own phones off them as soon as they reach the airport. I don't know if I could handle that.

Andersson recalls that, while in the pre-villa villa, where contestants are kept in isolation before going onto the show, she "wasn’t allowed to go online or watch live TV." Yikes.

As Bustle has previously reported, Love Island contestants are given new phones when they go inside the villa, but the functionality of these phones are seriously minimal.

In an interview with Heat, former islander Harley Judge revealed that islanders are pretty much limited to taking photos and texting one another or the Love Island crew members (hence "I've got a text!!!!") on the Samsung phones they're given. But that's it. No Instagram, Facebook, Twitter, or Snapchat in sight. So, if you spot the islanders plugging away on their phones, it's not because they're checking on their social stats. Instead, they're probably using it to clandestinely flirt with one another, to take a cheeky snap, or to hear some big news from the producers of the show.

So, for some contestants, they're looking at a couple of months worth of disconnect from the outside world. That's quite a lot of time for them to really get into the Love Island spirit and focus on finding love, at least by necessity.

As previously mentioned, it's a shame that the contestants don't get access to social media while in the villa, as a lot of them have huge social media followings and lots of interesting things going on on their various platforms.

Anna Vakili for example, has a massive 160,000 followers on Instagram already. As Bustle previously reported, the 28-year-old pharmicist gained 20,000 followers earlier this year after going on holiday with two famous Iranian footballers.

Tommy Fury is a pretty big name in the boxing world, and his brother Tyson is a heavyweight champion. Tommy has 288,000 followers on his Insta, and plenty of snaps of him in and outside the ring.

And Tommy's not the only one with a famous brother. Oh no. Curtis Pritchard is the sibling of Strictly's AJ, and is a ballroom dancer himself. He has racked up an impressive 128,000 followers on Instagram and lots of lovely pics of him on the dance floor and with his bro.

So, how will the 2019 islanders fare without access to hashtags, double taps, and stories? We have all summer to find. OMG, I can't wait.