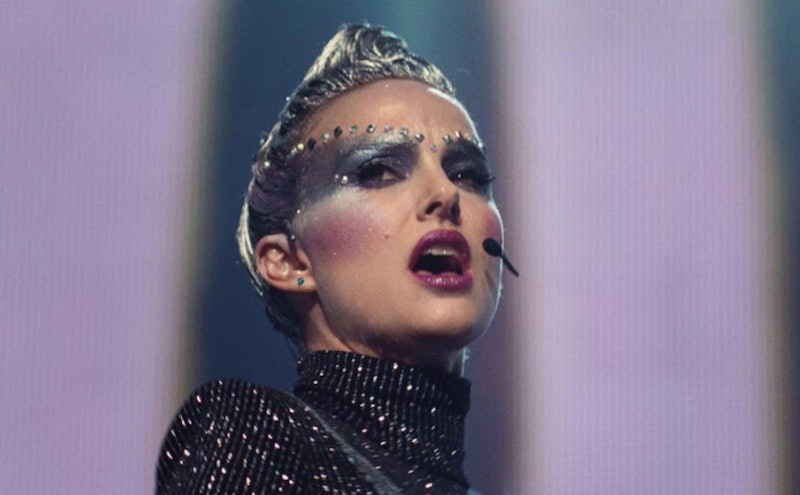 A star is born, but this time it's not Lady Gaga's Ally. In the new trailer for Vox Lux, the world gets to hear Natalie Portman sing. And for those that didn't know Portman can really sing, well, you're in for a treat. In her new movie, she gets to play a pop star with a little help from an actual pop star.

Sia wrote the music for Vox Lux, including the song "Wrapped Up" featured in the latest trailer for the film, which hits theaters in New York and Los Angeles Dec. 7, before opening in wider release on Dec. 14. In the teaser, Portman's Celeste Montgomery is seen on stage singing the song that started it all. It was "Wrapped Up," a track she wrote as a teenager following a mass shooting, that brought her here to this arena dressed in a fur-sleeved getup that channels Gaga. It's her chance at a comeback, a rebirth of sorts, which fits with her phoenix-inspired look.

No surprise, "Wrapped Up" sounds like a Sia song and Portman sounds a bit like Sia, whose "Chandelier" soundtracks the actor's Miss Dior perfume commercial. But in no way is she a copy cat of the pop star. Portman puts her own spin on Celeste, a 31-year-old pop star trying to navigate her career after years of scandal. It doesn't hurt that Celeste, now a mother to a girl who's nearly the same age she was when she was discovered, is once again trying to survive another trauma. Hoping once again, the music will save her. At the very least, this emo anthem is bound to get stuck in your head.

This isn't the first time Portman's showed off her vocals. Most notably in 2006 she rapped in a SNL Digital Short and shed that good girl image. This year she followed it up with another SNL rap where she defended the Star Wars prequels. Portman's even teamed up with Sia before, performing "Iko Iko" with her on The Tonight Show Starring Jimmy Fallon in 2016 wearing one of Sia's signature black and blonde wigs.

But this movie, directed by Brady Corbet, allowed Portman to really sing. It was the songs that drew Portman to Vox Lux. "There were these incredible Sia songs that [Celeste] gets to sing as a pop star," Portman told Vanity Fair back in September," which, normally a movie about a pop star is like, 'are we really gonna buy it?' Cause how can you get songs that are good enough."

Clearly, Portman says, you just have Sia write "extraordinary pop anthems that you fully buy as big hits." It doesn't hurt that Portman has the swagger of a pop star. But, don't think that means Portman has any interest in becoming one.

While Celeste got famous as a teen, just like Portman, she thinks, in many ways it's harder to be a pop star than an actor. “Their persona needs to be all the time, and that takes its toll." she told Vanity Fair. "It can be quite exhausting to have to be that person all the time, to have to be fabulous when you’re going to buy your milk.”

So, no, Portman isn't launching her music career with Vox Lux, but that doesn't mean you can't watch the movie and dream.