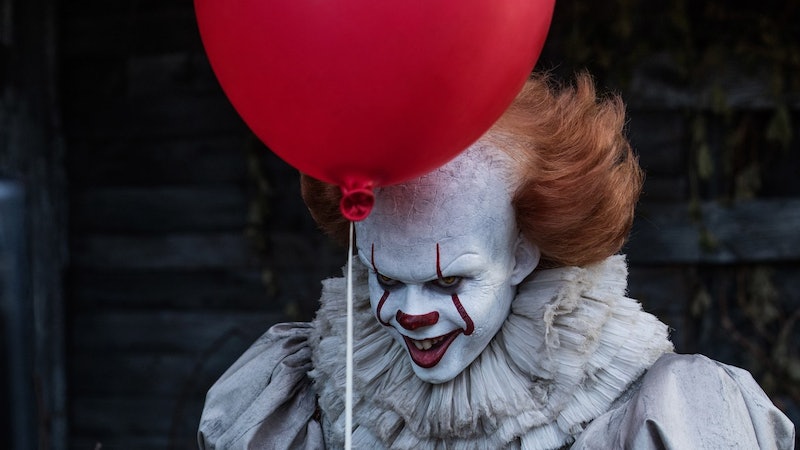 If you've never been fully immersed in the bizarre plot details and repeating themes of legendary horror author Stephen King, mentally gird yourselves now. With It Chapter Two about to hit theaters on Sept. 6, most viewers can safely assume that, despite the climactic battle against Pennywise ending 2017's It, the Losers Club of Derry, Maine didn't successfully finish off the titular entity. As the now-adult crew reunites to destroy It once and for all for all the question arises: can Pennywise the clown actually die? Book spoilers ahead.

The short answer is: yes. At the end of the 1986 novel, the Losers descend back into Derry's sewers and, facing off against It in the form of a giant female spider, challenge it to the Ritual of Chüd (more on that in a second) and ultimately crush Its heart, destroying the creature once and for all. But this is Stephen King we're talking about, a man whose mind-spinning mythos is only outpaced by his sheer word count. It isn't just It, it's also an avatar of Darkness, and if there's one theme ringing eternal across the King universe, it's that Dark and Light are locked in an ongoing and eternal struggle. Let's talk turtle.

Not just any turtle — mentioned as brief aside in the 1990 It miniseries and articulated a little more in the first It movie, Maturin is a cosmic trans-dimensional entity predating our universe and occupying the same void in which It/Pennywise exists. In the novel, Maturin makes a cameo appearance as "The Turtle," helping Bill figure out how to defeat Pennywise the first time they face off. Yes. A Space Turtle. Maturin was one of the 12 Guardians in King's massive Dark Tower series, and in the book It is referred to as "brother" by It itself. When adult Bill and It face off for a second Ritual of Chüd, It informs him the Turtle is dead and can't help him. If one trans-dimensional void being can die, it stands to reason the other can, too.

But how, exactly? Though it's more starting point than specific requirement, bookish Bill hits on the aforementioned Ritual of Chüd. It's a battle of wills, though King specifically describes it as a joke-telling contest where participants overlap tongues and bite down while talking. While that part might not make it into the movie, Chapter Two screenwriter Gary Dauberman has insisted that the Ritual will make it to screen in some form. Speaking to Cinemablend, he said, "The Ritual of Chüd is challenging, but it's such an important component to the book that we had to address it."

It's not the specific ritual, but the action that counts. Silver doesn't necessarily work against It, but because the Losers believe it does, silver becomes an effective weapon. Ultimately that's what can destroy a creature who feeds on fear and uncertainty: confidence and belief. The Ritual is a concentration of the two, and It is weakened by the Losers' strength. Add in that It seems constrained by the physical form it takes — though itself inter-dimensional, Its body is prone to tangible damage — and the Losers have a short at physically attacking It once It's weakened psychically.

Though many characters (like Maturin) who ostensibly died reappear throughout King's books — alternate universes and jumping around in time will do that — once It's defeated, the closest the entity comes to returning is far later, in King's 2001 novel Dreamcatcher. A character comes across a defaced memorial to victims of the Derry flood reading "PENNYWISE LIVES." But other than that, luckily for everyone's nightmares, once defeated, It seems out for good.