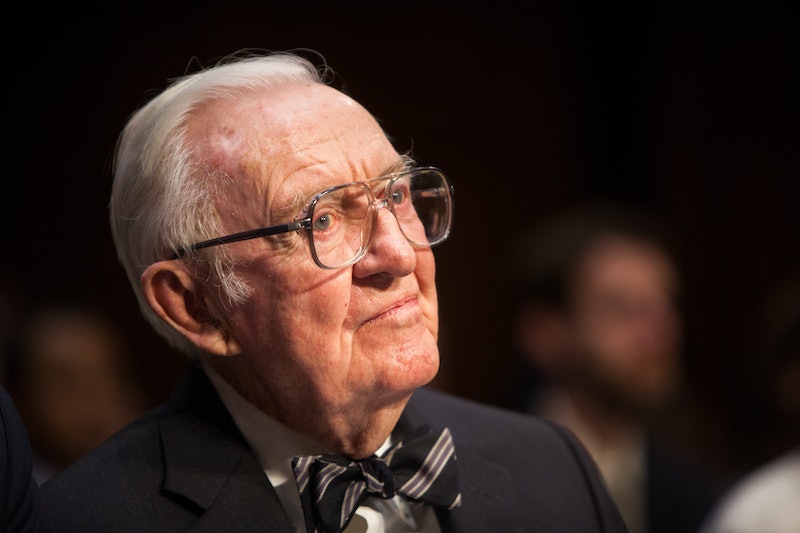 Following the March for Our Lives, former Supreme Court Justice John Paul Stevens wrote a New York Times op-ed challenging the activists to go even further. "The demonstrators should seek more effective and more lasting reform. They should demand a repeal of the Second Amendment," he wrote. Gun rights advocates have already begun the backlash, and gun control activists are pondering if he's right. After all, like the entire Constitution, the Second Amendment can be changed.

A change is called an amendment — and that is what got the right to bear arms into the document in the first place. The framers did not include the Bill of Rights, as the first 10 amendments are also known, in the original document. But they promised it would come later to the hesitant, Anti-Federalist original signatories.

The Second Amendment was added along with the rest of the Bill of Rights, which includes freedom of speech, protection from unreasonable search and seizure, and more.

But the amendment process didn't end after the Bill of Rights was adopted. According to Article V of the Constitution, an amendment can be proposed by a two-thirds majority vote in both the House of Representatives and the Senate. Two-thirds of state legislatures can also call a constitutional convention to propose a change (though that's never happened). Then following the typical route, three-fourths of states (or 38 of 50) need to ratify it.

This is the process Stevens said should be pushed for. He says that a Supreme Court ruling, District of Columbia v. Heller, created the individual right to bear arms, as opposed to that of a collective militia. He said thanks to that, the only way to beat the NRA is to get rid of the Second Amendment and calls its original purpose a relic of the 18th century.

"Overturning that decision via a constitutional amendment to get rid of the Second Amendment would be simple and would do more to weaken the N.R.A.’s ability to stymie legislative debate and block constructive gun control legislation than any other available option," Stevens wrote.

Changing the Constitution via amendment wouldn't even be without precedent. Some of the best parts of the Constitution were added later in this manner. The prohibition of slavery, giving women the right to vote, and other changes after the adoption of the Bill of Rights have made the document stronger. The original Constitution counted slaves as just three-fifths of a person when apportioning the number of representatives that each state got.

Amendments have even been removed years later, when it became clear they were not in the best interest of the country. The best example would be the 18th Amendment, which introduced Prohibition across the country and made selling alcohol illegal.

The problem there was that organized crime began to control the production and distribution of alcohol in the United States. That led to a lawless time with law enforcement challenged by gangsters like Al Capone. Ultimately it was decided that the 18th Amendment was a mistake.

So the government proposed the 21st Amendment, and saw that it was ratified. The first article reads, "The eighteenth article of amendment to the Constitution of the United States is hereby repealed."

That could be the text that is copied for the repeal of the Second Amendment. It could also be limited in other ways that don't prohibit forming militias to fight an abusive federal government (perhaps you could sway some Republicans that way).

Pretty much any gun control policy could be inserted, too — at least from a technical if not political standpoint. This may in fact be difficult, but it's not impossible. The framers left a tool to make revisions.