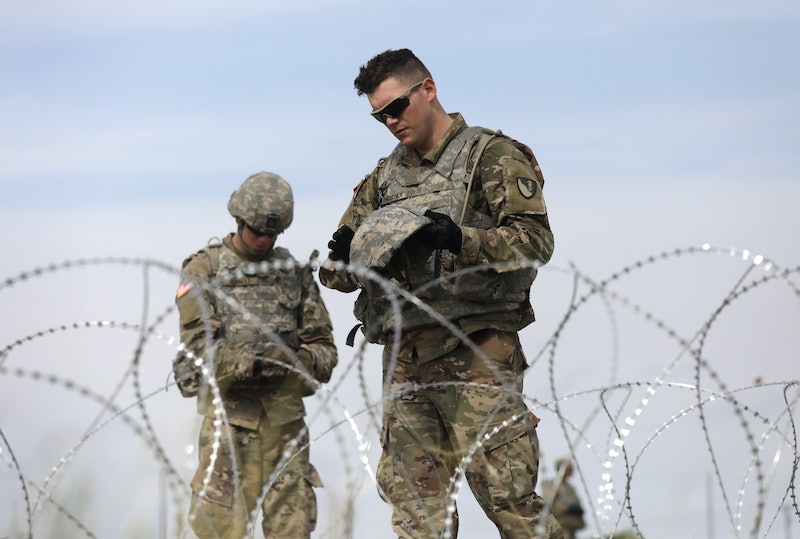 The U.S. government seems to be escalating the situation at the border, where thousands of Central American migrants are waiting to potentially request asylum. On Tuesday evening, an order came from White House Chief of Staff John Kelly allowing border troops to use lethal force to protect themselves when "reasonably necessary," according to the Military Times. Critics warn that the order may violate a law that's been on the books since the 19th century.

Per the Military Times, the command is a "cabinet order" that allows troops to "perform those military protective activities that the Secretary of Defense determines are reasonably necessary" for their safety, including "a show or use of force (including lethal force, where necessary), crowd control, [and] temporary detention."

That's where the Posse Comitatus Act comes in. Signed by President Rutherford B. Hayes in 1878, the law prohibits the military from enforcing U.S. laws within its borders. It's useful because, as The Washington Post points out, empowering the military to act as police on U.S. soil can allow the president — who commands the troops — to use them as a political instrument. If use of force gets entangled with the political realm, it could potentially cause backlash and more violence. Plus, as Gene Healy of the Cato Institute put it, "Soldiers are trained to be warriors, not peace officers."

Some legal experts are arguing that the new order may violate Posse Comitatus, according to the Military Times. The fact that John Kelly signed the command has also raised concerns because it falls well outside of his typical duties. But even if the president himself had signed the directive, the 1878 law still takes precedent. National security expert William Banks told the Military Times that "even [an executive order] couldn't overcome Posse Comitatus."

The law is "always looming in the background," Banks said. "You never invoke it as such because it is such a background principle."

The Military Times reports that there is some leeway to how Posse Comitatus is interpreted. U.S. soldiers have helped border officials enforce some drug trafficking decrees, for example. But according to the outlet, this order marks the first time that thousands of American troops have been authorized to use force while inside the country.

The targeted group of Central American migrants was a point of contention in the lead-up to the midterm elections earlier this month: President Donald Trump argued that they posed a national security threat and critics countered that they were just vulnerable people seeking help. In his Tuesday order, Kelly echoed warnings about the dangers presented by the so-called "caravan." He wrote of having "credible evidence and intelligence" to signify that the migrants "may prompt incidents of violence and disorder" that could endanger U.S. border workers.

Nearly 2,500 migrants arrived in Tijuana, Mexico over the weekend and set up temporary shelters there. According to The New York Times, Tijuana officials say that the numbers could swell to 10,000 once the full group arrives along with two other "caravans" behind it. Many of those people may end up petitioning for asylum in Mexico or across the border in the United States.