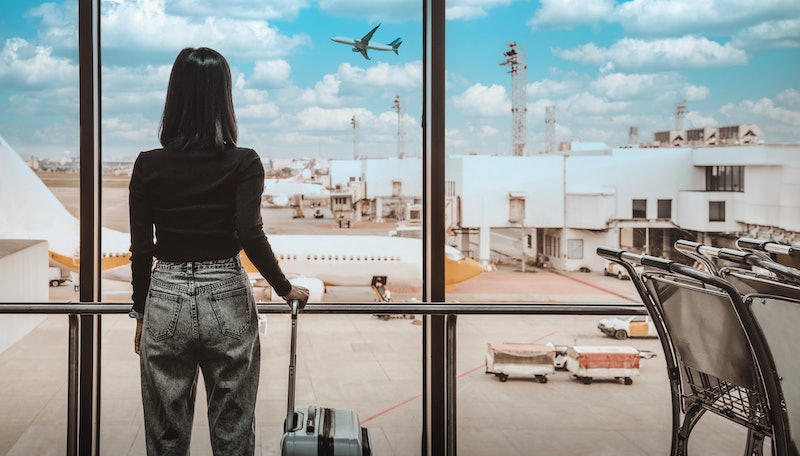 One of life's greatest annoyances is hearing the announcement that your flight back home is boarding — and that you have to wait 20 minutes until they finally let your zone on board. It might be tempting to skip that massive queue, but boarding before your zone is called isn't just a lapse in airport etiquette; it can also screw up the process for your fellow passengers.

“Airlines board by zones for a couple of reasons, but mainly it’s to help manage travelers so that the process runs as smoothly and effectively as possible,” Mary Silva, editor at travel site JohnnyJet.com, tells Bustle. “The airline you are flying likely has a system set up to help prevent aisle congestion. For instance, some airlines board via a system known as WilMA — which means they board window first, then middle, followed by aisle — while other airlines board from back to front.” Another reason airlines use a certain boarding process is to reward premium customers, like first or business class passengers or airline credit card holders.

Similarly, some people who board early, such as people with young children or the elderly, need the cabin crew’s assistance, so it’s best for them to board before others, Lisa Schoenthal, a flight attendant, tells Bustle. “Pre-boarding gives flight attendants time to help passengers who need it before the plane is packed,” she says.

Patrick Smith, an airline pilot since 1990, host of AskThePilot.com, and author of Cockpit Confidential, tells Bustle that it wasn't always like this. “In the olden days, planes were boarded back-to-front, according to row number,” he says. Zone boarding uses elements of old-style row boarding with priority emphasis for frequent flyers and premium-class customers. “It’s a good idea, but it can be confusing when carriers have multiple zones with different, similar-sounding designations,” Smith says. “If people need to stare at their boarding passes for 30 or 60 seconds just to figure out which zone they’re in, it’s not working right.”

Is Boarding During Another Zone’s Time OK?

As for whether you can board with a zone that’s not your allotted one, it depends. Silva says to board only when your zone is called. Alexis Tiacoh, public relations manager at Expedia, agrees. “I’d encourage travelers to board when their respective status, ticket type, or zone is called,” she tells Bustle. There are exceptions to this rule: as mentioned above, anyone who needs extra assistance can board first. Often, airlines will invite active duty military to board early as well.

But, what if they’ve already called your zone and you missed it? Schoenthal says it’s then OK to go up to the front of the line. “But never do so before your boarding group is called,” she says. Mindy, a former flight attendant who asked to use her first name to protect her privacy, says that some people probably do try to get on before their zone is called, but advises against doing so. “Since so many people are waiting, it is preferable to be polite and wait your turn,” she says.

How To Make Boarding Easier

Carey Malloy, brand marketing director at Orbitz, tells Bustle that if you’re flying economy, you’re definitely no stranger to standing impatiently alongside a crowd of fellow Zone 4-ers while the flight attendant repeatedly announces boarding calls for priority and first class passengers. “Although boarding by zones helps flight attendants avoid chaos and maintain order while loading passengers on the aircraft, waiting so long to board can cause frustration and anxiety for many travelers,” she says.

Smith thinks there’s a way for the whole boarding process to go more smoothly. “Among the most irritating passenger habits these days is the insistence on lining up and forming a crowd around the doorway,” he says. “As soon as the first boarding call is made, 200 people, regardless of which zone or row they’re sitting in, instantly stand up and form an unruly line.” He says that then the people whose turn it is to board must fight their way to the front. “Everything about this practice slows down the already tedious boarding process,” he says. “There’s no reason for it. Stay seated until your zone is called, and then proceed to the jetway.”

No matter when you board your flight, there does seem to be a method to the madness. Whether you upgrade to priority boarding to skip the line, or sit and wait it out until your zone is called, just know that you’ll get on your flight eventually. But the more you can streamline the process, the better.