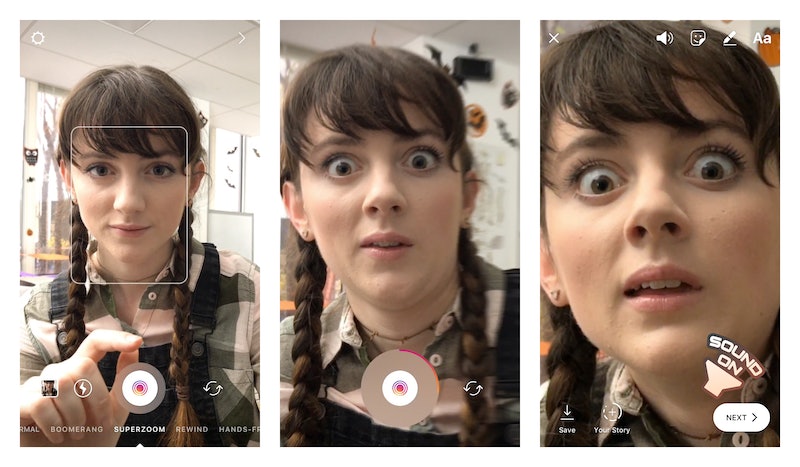 Intense music is key to pretty much every high-drama moment ever captured on film. Without the iconic "dun-dun, dun-dun" moment, Jaws could have been just another shark movie — it's the crescendo of the creepy score that often cues us to scream at the unsuspecting character in a horror movie, "No! Don't go in there!" We need the audio to match what's happening on-screen, which is one of the many reasons I'm pretty psyched about Superzoom, one of the features that comes with Instagram's Oct. 26 update: The new camera feature lets you zoom in on whatever you want, and adds ~dramatic~ music to your work of art. So, of course, when I could finally download the new version of the app, one of the first things I checked was whether or not you can change the music that comes included with Superzoom. It turns out that you can't, but I don't think I'm too mad about it.

If you haven't had a glimpse of the Superzoom feature yet, let me first make sure you understand the basics. When you open Instagram, the new functionality presents itself a lot like Boomerang, as one of the camera modes you can choose within the Stories screen. Unlike Boomerang, it's not available as its own app — at least not yet. To capture a Superzoom (yes, you should use it as a noun), you can simply tap and hold to record or tap just once to record a three-second clip automatically. Really, it's a lot like Boomerang, but it gives you an intense zoom effect instead of a funky bounceback. It eliminates the awkward unevenness that comes with trying to simultaneously hold the record button with one finger and focus in on a specific point with the other.

Once you've captured the Superzoom, the app adds in a few notes of dramatic music for the playback. Don't waste your time poking around the app for other song options, because there aren't any. And while we are used to living in a world of options, I don't think it's really going to bother you that you won't have the opportunity to switch up the musical selection before you post or send the video (don't forget the "sound on" sticker before you do!). The mini-score that comes built into the feature is the perfect theatrical touch for any hyper-zoomed selfie or other hilariously over-dramatized moment. Trust me, you're not going to wish that you had a more upbeat jingle or country jam for these clips. It just wouldn't make sense.

Superzoom is bound to have staying power as a beloved Instagram feature, but there are other, more seasonal elements of the Oct. 26 update that are worth noting too. Once the update is released, Insta users will find that they have access to five Halloween-themed face filters (flashlight, fog, night vision, zombie, vampire) and a fun selection of spooky stickers (a pumpkin, candy corn emojis, eyeball candy, and devil horns, to name a few), all of which will be great additions to Stories mode. I anticipate that you'll get a lot of use from those extras in the days before Halloween, and if you combine them with Superzoom, you'll find that the music fits perfectly into the general spook factor of the season.

The videos you can capture using Superzoom may be short, but they'll still give you the opportunity to flex your skills as a horror filmmaker if that's something you're into. The built-in audio really ups the dramatic effect for all things Halloween — and by the time we're through this scary season, you'll be so used to those theatrical musical notes that you won't be able to imagine it any other way. You might even thank Instagram for giving you one less choice to make in the course of your all-too-complicated social media life. Decision fatigue is real, people.