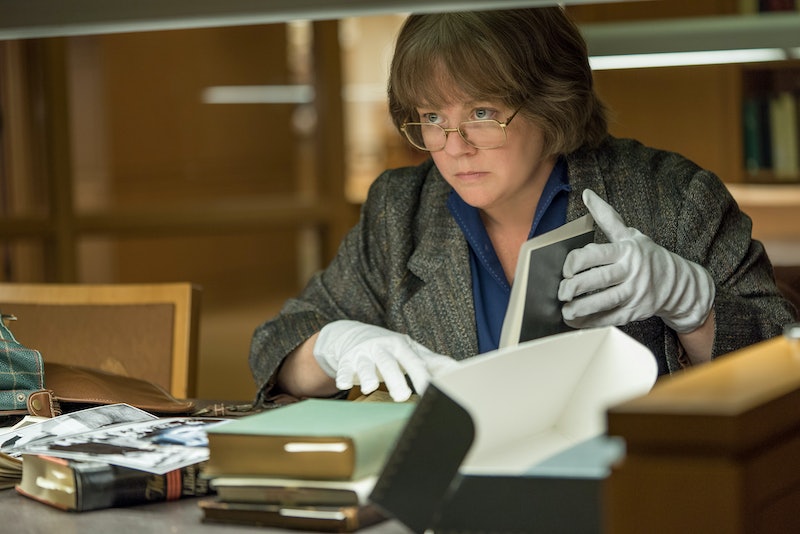 It's not often that movies directed by women, written by women, or even about women make their way into awards season conversations. So if a movie on the horizon hits those three targets, it's only natural that we'd want to celebrate it — and such is the case for Can You Ever Forgive Me?, which stars Melissa McCarthy, is directed by Marielle Heller (The Diary of a Teenage Girl), and is co-written by Nicole Holofcener (Enough Said). Inspired by a true story, the film (out Oct. 19) is quickly becoming a must-see after earning great reviews at the Toronto International Film Festival, and its subject matter, as well as the women involved, make it essential viewing for fans of female-centric films.

Can You Ever Forgive Me? tells the story of writer Lee Israel, an American author who gained notoriety in the '90s not for her own works but for selling forged letters she claimed were written by famous celebrities. After a middling career as a journalist and biographer, Israel found herself in dire straights. Though she had successfully interviewed the likes of Katherine Hepburn, and written books about Estée Lauder and other celebs, Israel's career was on the decline. A series of desperate events led to a stint forging as well as theft. Over the course of just three years, Israel managed to forge over 400 letters, claiming they had been written by deceased actors and writers. She wrote in her memoir of the same name, "I still consider the letters to be my best work."

Israel seems like the perfect part for Melissa McCarthy, whose career has had an interesting up and down trajectory. After becoming a fan favorite on Gilmore Girls and winning an Emmy for her comedic turn on Mike & Molly, McCarthy burst into the movie arena with her gut-busting role in Bridesmaids. The performance was such a breath of fresh air that it earned her an Oscar nomination, but her following movies haven't hit critically on the same level that Bridesmaids did. Though she's turned out some fun comedic romps, like Spy and Ghostbusters, and was a pure vision playing Sean Spicer on SNL, many of the comedian's films like Tammy and The Boss haven't been able to recapture that McCarthy magic.

But like many comedic actors before her, McCarthy seems to be headed into dramatic territory with Can You Ever Forgive Me?, potentially nabbing her acclaim and awards. From Jim Carrey with The Truman Show or Eternal Sunshine of the Spotless Mind to Steve Carrell with Foxcatcher and The Big Short, plenty of stars have successfully segued from comedy to drama and back again, and McCarthy's showing is already being hailed as equally praise-worthy. Variety called it her "best performance to date," Vice said she is a "force of nature," and Vogue labeled her "revelatory." With reviews like these, McCarthy will no doubt be making the awards rounds this winter.

But it's also revolutionary that McCarthy is being applauded for playing a bristly and unlikable woman, which is rarely depicted on-screen. "McCarthy makes a grouchy curmudgeon into a surprisingly sympathetic figure, throwing off her likable persona to play someone who is cold to those close to her, and mean to just about everyone else," wrote Monica Castillo on RogerEbert.com in a review of the film. Add that to the fact that Israel is a woman attempting to make a living in a male-dominated field, and the true story of a woman's survival brings feminist roots to the journey. "As the saying goes, 'Lord, give me the confidence of a mediocre white man,'" Variety continued in its review. "Though it never hammers the point, this movie...poignantly reminds that men never seem to appreciate how good they have it."

It will be exciting to watch how Can You Ever Forgive Me? does throughout this season, whether that's earning nominations for McCarthy, Holofcener, Heller, the film itself, or all of the above. If awards bodies continue to embrace more female-centric stories into its roster of winners and nominees, we might just be able to forgive them for years of neglect.